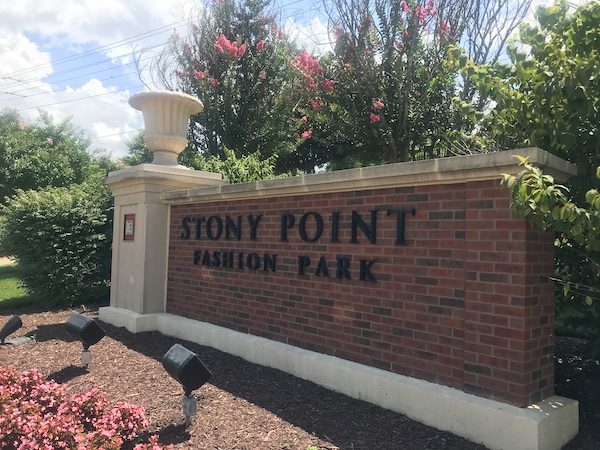 Stony Point is preparing to purchase one of its parking lots for potential redevelopment. (Mike Platania)

The next step in the evolution of Stony Point Fashion Park looks to involve a land deal with the city’s Economic Development Authority.

Starwood Capital Group, the firm that owns the 16-year-old South Richmond retail center at 9200 Stony Point Parkway, is purchasing a roughly 3-acre section of the surrounding parking lot for an expansion of the mall.

The EDA owns the lot and Starwood has the rights to buy it based on terms of a deal made between the city and the original developer of Stony Point, Taubman Centers, in the early 2000s. Starwood bought the mall from Taubman for $72 million in 2014.

“We had the rights under our agreement with the city to purchase the land and we have chosen at this time to enact on that agreement,” Alley wrote in an email. “As the retail environment evolves, so will we.”

Alley declined to comment on Starwood’s plans for the land, adding only that they’ll “have some exciting opportunities to share in the near future.”

EDA documents indicate that Starwood plans to build on the site. Minutes from the EDA’s November 2018 board meeting state that the lot would be used for an addition to the shopping center.

It’s unclear from Starwood or EDA minutes exactly which section of the parking area will be sold. The authority owns roughly 41 acres of parking that surround the 660,000-square-foot mall. Starwood owns the bulk of the mall itself, with the Dillard’s and Saks Fifth Avenue department store buildings owned by their respective tenants.

The purchase price for the 3-acre section will be determined by a formula that accounts for a portion of the difference between the land’s appraised value and the value that was set when the EDA took ownership of the land when the mall was built in 2003 – $13.5 million, according to city property records.

An expansion at Stony Point would mark the ownership group’s latest efforts to transform the look and flow of the mall in an age when traditional malls are struggling.

Starwood began tens of millions of dollars’ worth of renovations at Stony Point after it acquired the property. It also recently began to welcome more nontraditional mall tenants, such as a yoga studio and an escape room. The mall’s former Dick’s Sporting Goods store remains vacant after it closed last year.

Given how their $50million renovation has gone, including the cut through that never happened, I can only imagine they are buying this land to put a Dollar General or a Burlington Coat Factory. I can’t see the owners doing anything better, or further misjudging the market for that mall space.

Also, what do they possibly need to expand into that they can’t use the Dick’s space?

Will Weaver
Reply to  Fred Squire

Exactly! That’s a pretty substantial empty space that could be repurposed if they can’t find another anchor.

David Bass
Reply to  Will Weaver

Starwood has a health club eyed for the Dick’s spot

Adding more apartments close to the mall would bring some much needed life to the area. I never understood why they didn’t try to create more of a village atmosphere with apartments above the retail shops.

Will Weaver
Reply to  Justin Reynolds

There’s currently new apartment construction underway (I believe some are actually open), but that’s not going to solve the mall’s high vacancy rate by itself.

The EDA owning the parking lots explains a lot why this has not happened before.

I went there for dinner Saturday night and what a ghost town! Many of the stores were closed by 7 PM (Restoration Hardware, Brooks Brothers…) and even though the weather was nice there were not many people walking around. I would be surprised if the mall is still open five years from now as leases continue to expire…

They could Air B&B the vacant storefronts. People are killing it with Air B&B.

How is Saks still open?

Word I had heard was they decided to leave a few years ago and were given a lease deal they couldn’t pass up I am baffled how they are still there as well as Brooks Brothers. I believe Vineyard Vines is the only store with any real foot traffic and they are contractually bound not to relocate to ShortPump because Nordstrom and Franco’s carries their brand. I would imagine like Lilly Pulitzer, they may steamroll their smaller vendors if the money is there and just move at some point. How they can’t keep a Starbucks open, and a Chipolte should… Read more »

Will Weaver
Reply to  Fred Squire

Yet Tiffany’s is still alive and kicking…

This is by far my favorite mall in Richmond. The dog friendly aspect is such a competitive advantage. I wish the lesdership team wisdom and prudent decisions as they expand. Hope they are successful.

It would be awesome if there were a car wash at Stony Point! I could shop, take a yoga class, visit Escape Room and be totally entertained while my car is getting cleaned or detailed.

Interesting decision. I’d like to see them further outfit the existing premises with stores, restaurants, etc that are going to continue breathing life into the mall and fill the existing vacant store fronts. Stony Point does have some outstanding restaurants, but it appears they have historically had a tough time retaining tenants. I’m sure they have some kind of plan in place with the property, but as it stands today, the mall appears to have weak footing. I’m hoping the best for Stony Point. It really is a beautiful place with plenty of potential, it just doesn’t get the traffic… Read more »

They need something ti increase foot traffic. A CVS, grocery store, or a brewery that hosted a lot of events and concerts.

If the people who commented above get to read this it might help with understanding what will not happen at Stony Point. First of all apartments above retail hasn’t worked well in our market. West Broad Village is a prime example in Short Pump. Secondly Burlington or Dollar General couldn’t afford the rent, even if they were in the running, which they wouldn’t be since they are far lower end retailers. The Mall isn’t going to get a grocery store or a drugstore either. The traffic simply isn’t there to support either use. The former Dick’s could become a special… Read more »

Brian, I was clearly joking by suggesting a dollar general or Burlington. I know that won’t happen.

I also don’t know if at the end of the day they will make any meaningful additions or just delay the inevitable of becoming the next Virginia Center Commons.

If it were me, I’d raze the mall retail and build more MOB, since that area seems destined for that.

However I am still angry they allowed Rio Grande Mexican to leave. They had the best chips and salsa!

“outstanding restaurants”? Give me a break. Corporate huge chains are no where near using an adjective like outstanding.

The mall’s problem is its lack of access from the community. The solution to its high vacancy rate isn’t to simply add more retail space (that’s just going to increase the vacancy rate). The mall already has an empty anchor space (Dick’s) with no replacement forthcoming, and Dillard’s is likely to leave at any time as it gets virtually no business – the parking lot is virtually empty even during peak hours. They need to improve access from Route 147 and other local roads to bring in more people, which will attract more potential tenants to the area.

Brian Ezzelle
Reply to  Will Weaver

No mall traffic on Cherokee

Will Weaver
Reply to  Brian Ezzelle

There is a restricted access connector road that leads from the business park adjacent to the mall over to Cherokee Road, but besides that there doesn’t need to be.

An easy solution would be to extend Stony Point Road from its current endpoint to Stony Point Parkway and you’d have access from Huguenot Road/Route 147 without increasing congestion in adjacent neighborhoods too much, if at all. Google Maps shows property lines and it looks like there’s already right-of-way available to do that with minimal disruption to existing development.

Justin Reynolds
Reply to  Will Weaver

Agreed. I never understood the lack of a connector road to Forest Hill/Stony Point Rd. It would have changed the character of that neighborhood behind Stony Point Shopping Center, but then the mall would not feel as isolated.

All Stony Point Fashion Park need is a 3 to 4 star hotel in it’s property.