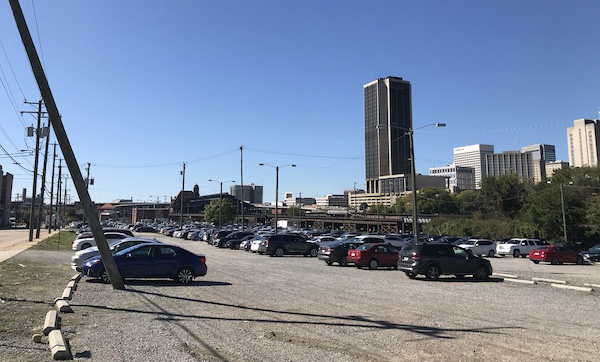 The Lovings Produce site is currently used as a parking lot both privately and by VCU. The owners are seeking rezoning to make way for a mixed-use development. (BizSense file)

Lovings Produce LLC seeks to rezone properties at 300, 400 and 510 Oliver Hill Way from industrial use to the TOD-1 Transit-Oriented Nodal District. The rezoning would potentially make way for a mixed-use development that could bring a new large retailer to the neighborhood.

Max Holdings LLC is proposing a five-story mixed-use building with 52 apartments above 7,000 square feet of ground-floor commercial space at 711 Dawn St. The half-acre site is off Tazewell Street just north of where it branches off of Chamberlayne Avenue.

Also on the agenda is an ordinance to declare surplus and direct the sale of 15 parcels of city-owned real estate to the Maggie Walker Community Land Trust, which manages the Richmond Land Bank. The parcels would be sold for $1 each and are separate from 36 parcels earmarked for the nonprofit in the city’s recently approved real estate disposition plan.

The commission also will receive a presentation on the so-called Greater Scott’s Addition rezoning plan. A proposal from Bow Tie Cinemas and parent company Bow Tie Partners to build a drive-in movie theater in the parking lot of its Movieland at Boulevard Square complex on Arthur Ashe Boulevard was withdrawn from the agenda.

For the commission’s consideration is a rezoning application filed by Markel | Eagle that would allow the construction of 31 age-restricted, single-family detached homes as an extension of the Parkside Village subdivision. The project area is at the northwest corner of Ashland and Johnson roads.

The commissioners will vote whether to recommend the proposal, which would then go to the Board of Supervisors for final approval.

The Richmond City Council meets at 3:30 p.m. Monday for a special meeting on various budget-related papers. The council’s Organizational Development Standing Committee meets at 5 p.m. to establish a process for completing the final disposition of Confederate monuments removed from city-owned property. The council also will hold a budget work session at 6 p.m. Agendas can be found here.

The Powhatan County Board of Supervisors is scheduled to meet Monday. Full agenda here.

The county will hold a public hearing on the county’s proposed budget for fiscal year 2022. The proposed $135.3 million operating budget is a 21.5 percent increase ($23.9 million) compared to the adopted FY21 budget. The budget features a $69 million general fund.

The real estate property tax rate is proposed to be set at 79 cents, a 6-cent decrease compared to the current rate of 85 cents per $100 of assessed value. Other tax rates are proposed to remain level.