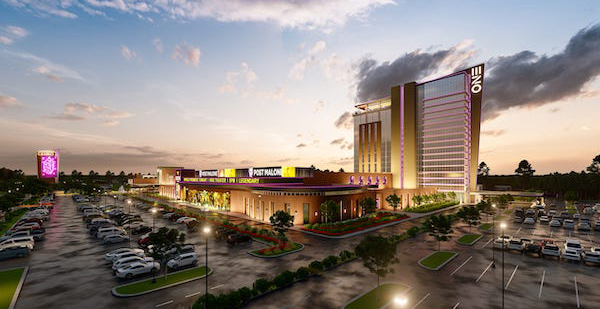 Urban One’s proposed casino and resort would rise on Philip Morris-owned land just off Interstate 95 if approved by Richmond voters Nov. 2. (Images courtesy of Urban One)

The city has chosen its preferred casino site.

Urban One’s pitch to develop a $600 million, 300,000-square-foot casino on the Southside at 2001 Walmsley Blvd. has been selected by the city’s Resort Casino Evaluation Panel as the top proposal, Mayor Levar Stoney’s office announced Thursday.

The ultimate decision of whether or not the casino gets built is now in the hands of city residents, who will vote on whether to grant a casino license through a referendum on Nov. 2, 2021.

Through the city’s RFP process, Urban One beat out The Cordish Cos., a Baltimore-based developer which operates casinos nationwide under its “Live!” brand. Cordish was proposing to build a casino on 17 acres of Bow Tie Partners-owned land at 1301 N. Arthur Ashe Blvd.

Four other casino operators submitted proposals to build in Richmond in February, and in the following months the city gradually cut the field down to Urban One and Cordish.

Known for its dozens of radio stations, including four in Richmond, Urban One teamed up with Peninsula Pacific Entertainment on its bid for a casino. Peninsula Pacific owns and operates Colonial Downs Racetrack and five Rosie’s Gaming Emporium locations in Virginia, along with a pair of casinos in New York and Iowa.

Urban One got a taste for the casino business in 2016, when it invested $40 million for a minority stake in MGM National Harbor, a resort casino in Maryland.

In a prepared statement released Thursday, Urban One CEO Alfred Liggins thanked the city and lauded the tax revenues Urban One estimates the project would generate.

“We are fully committed to creating good paying jobs with profit-sharing for employees, pathways to successful careers, and generating significant new tax revenues that can improve Richmond’s schools and fund community programs and infrastructure,” Liggins said.

In addition to a 100,000-square-foot gaming floor and 250-room hotel, Urban One’s project would also include a 3,000-seat theater, a 20,000-square-foot event space, 55 acres of green space with a festival lawn, and 12 restaurants. Liggins has previously said they’re in talks with some local restaurateurs to open concepts at the development.

Urban One claims the project would generate $525 million in tax revenue over the next decade, and that they would pay the city a $140 million up-front payment. Per its website, Urban One estimates that 77 percent of the casino’s visitors would be non-locals.

Stoney, who said the project would be “an additional economic engine in South Richmond,” is now preparing to introduce the casino matter to the Richmond City Council at its May 24 meeting.

If approved, it would head to the Virginia Lottery Board, which regulates casinos in the state, before the city petitions Richmond Circuit Court for the referendum to be placed on the ballot in November.

Zed Smith, The Cordish Cos.’ COO, issued a statement expressing their disappointment in losing out on the deal.

“While we believe our site clearly would have brought the largest long-term economic benefit to the City and its residents, as evidenced by the City’s own independent, outside consultant, we respect the Evaluation Committee’s decision,” Smith said.

Philip Morris owns the land on which Urban One is planning the project. It’s unclear whether the firm has it under contract for purchase.

I did a research paper when I was a student at Rutgers on the benefits casino gambling would bring to Atlantic City. Looks familiar to me. Good luck, Richmond.

Well, I don’t think it worked out to well for Atlantic city, was that your point?

I feel like that is a bit of an apples to oranges comparison as AC tried to become an east coast Vegas. There are plenty of small casinos like this operating around the country, that have not provided such a bleak scenario. I don’t gamble, but hope to enjoy future performances and conventions that will take place there.

Atlantic City is heavily dependent on tourism to flourish. Richmond is not. and is experiencing a lot of growth. Apples to oranges. My brother lives near a casino in Tampa and there has been little negative effect on the area.

Atlantic City was a dump before gambling unless you want to go back to the 50’s or 60’s. Not saying it helped but gambling was approved as a way to boost the area that was already in bad shape.

There is no doubt that this was going to be the finalist from the very beginning. I hope it will help improve the area around Commerce Road and provide living wages for the residents.

I prefer this site due to its access to 95, but I still think it would have been cooler to have it on the east side of 95 with river access. Even in an industrial type area I think river access would drive a lot more visitors.

Cordish is the more experienced operator but with a Richmond site that was never viable. What Urban One lacks in casino experience they made up for with a much better PR campaign.

Any business that wants to improve that part of Richmond without relying on city funds to “make their numbers work” is fine by me. I’m not a gambler, but excited to see the development, the jobs, and the improvements to that area. Good Luck to this group, I hope their venture is successful…

I love their promise on revenue and jobs is in the affirmative; we will see if 1) voters pass it or pass on it; and 2) if it open it generates the revenue promised. I wonder if Urban One is willing to put a bond to guarantee tax revenue as a way to incentivize the voters. I mean they paid off members of Council and the administration….I mean they made political donations to them and/or their campaigns/PACs during the City review process.

Michael, why single out one group?

Gambling, just like the lottery, is essentially a tax on the poor. Just what South Richmond needs more of. Nice looking out.

Do you view entertainment and consumption in general as a tax on the poor? Because that’s basically what it is. Being a consumer is a tax on the poor, the poor are some of our strongest consumers. So let’s be real, it’s not the “tax on the poor” that bothers anyone proclaiming this, it’s the industry itself.

@Ashley – I half-way agree: the objection to casinos in Richmond is mainly an objection to the gambling industry. The lottery is better example of a “tax on the poor” (as well as a tax on the desperate, the greedy, and, in a way, a tax on ignorance). Casino gambling preys on all classes. The problem is that, to the extent it preys on those who can least afford it, it will cause some percentage of those persons to become more of a burden on society. The dad or mom who can barely make rent will fall further in the hole.… Read more »

SA – I have visited many casinos over the last 30 years, probably over 100 different ones in many states. The one trend I have noticed is that the economic level of the “average” player has decreased substantially over that time, yes there are still “high rollers” but also see people coming off the bus line that pull out their wallets with $37 in them and proceed to spend every last dollar. I see quite a bit of gamblers now that appear to be on public assistance and I have even seen them trying to use EBT cards in the… Read more »

if you want to look at a business that has a negative impact on the area, look at Walmart..
They crush local businesses, and a lot of their employees are on foodstamps meaning, we the taxpayers foot the bill for the “low prices”.

If the casino can offer everyone a living wage then the would be a welcome addition to Richmond.

Ed, did you read your own link?

“The report found that Medicaid enrollees and SNAP recipients were significantly more likely to work in the leisure and hospitality industry than workers not on either programs.”

Walmart said its minimum starting wage for workers will remain at $11 an hour.

Walmart will raise some people in some stores in some roles to 15 dollars an hour a some point..

Also, the quote you used says Medicaid and SNAP were more likely to be found in the leisure and hospitality industry. Wouldn’t that be a casino?

I just want to know, will we finally be able to have Walmsley Blvd. properly connected to 95 and rt 1

That looks unlikely as ONE has placed the park where Walmsley would have connected. All the traffic will just flow in and out directly to I-95.

Like this was a surprise to anyone, Peninsula Pacific Entertainment got them a minority partner and the deal was done.

If there has to be a casino in Richmond, this is the place to put it. New development can only benefit that area. Scott’s Addition was a ridiculous idea.

This location makes the most logistical sense. It will be near several hotels with direct access to I-95. Casinos don’t make poor people poor, economics make them poor. Lack of jobs and opportunity causes poverty. I am happy to see Richmond move forward and is willing to create a better and brighter future. Too often people vent negative things about the city and some that vent don’t have any ability to use foresight. What has held Richmond back in the past was people just being stuck in a rut not willing to change using the same old tired played out… Read more »

Economics created the conditions for where the casino is going…pretty much every proposal is met with a NIMBY reaction, but the casino was always going to the location that had the least resources to fight it.

So yes, casinos are a symptom of poverty not a cause.

If I am not mistaken the people in that area want the casino there. In this case the path of least resistance is caused acceptance of a new idea and a chance to revitalize a area that has been stagnant for decades. There is ample opportunity for growth in more than one area of the city. I know everyone has their 2 cents but from a logistical standpoint this is by far the best choice. Politicians are always going to take the path of least resistance but you don’t need money to protest your concern….just be willing to make noise.… Read more »