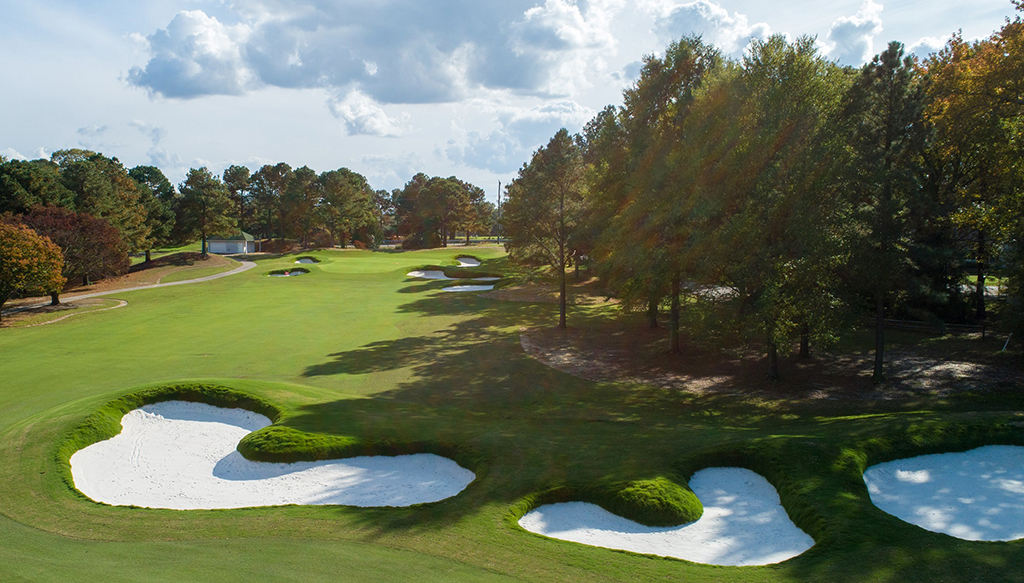 An aerial of the restored bunkers around the new No. 3 hole on the 12-hole course. (The Drone Co. – RVA)

As if on script to roll out a storybook new beginning, the restored and reimagined Belmont Golf Course got off to a memorable start on Monday with a near hole-in-one on one of the inaugural tees shots.

A ceremonial bell ringing and tee-off was held Monday at the Henrico County-owned golf course at 1600 Hilliard Road ahead of reopening to the public on May 29.

The century-old course, originally designed by famed golf course architect A.W. Tillinghast, has been closed for more than a year while undergoing a reinvention at the hands of local nonprofit First Tee of Greater Richmond.

First Tee was awarded a contract from the county in 2019 to lease the course and transform it from a money-losing liability managed by Henrico Parks and Rec into a modernized asset that would allow it to remain a public course and increase youth golf participation.

With what turned out to be a budget of $5.1 million, raised mainly from private donations, First Tee set off to accomplish all of that by converting Belmont’s 18 holes into a six-hole short course and a 12-hole course that would rely on and restore many of the bones of its original design from 1916, as well as adding a driving range and practice areas.

The new layout was created by Love Golf Design, a course design firm run by veteran PGA champion Davis Love III, whose other work includes the Birdwood Golf Course in Charlottesville and the Olde Farm Golf Club in Bristol, Virginia. MacCurrach Golf out of Jacksonville, Florida handled the heavy lifting of the renovations.

The new layout is meant to tap into trends of shorter courses and quicker rounds, themes that are showing up at other courses around the country. 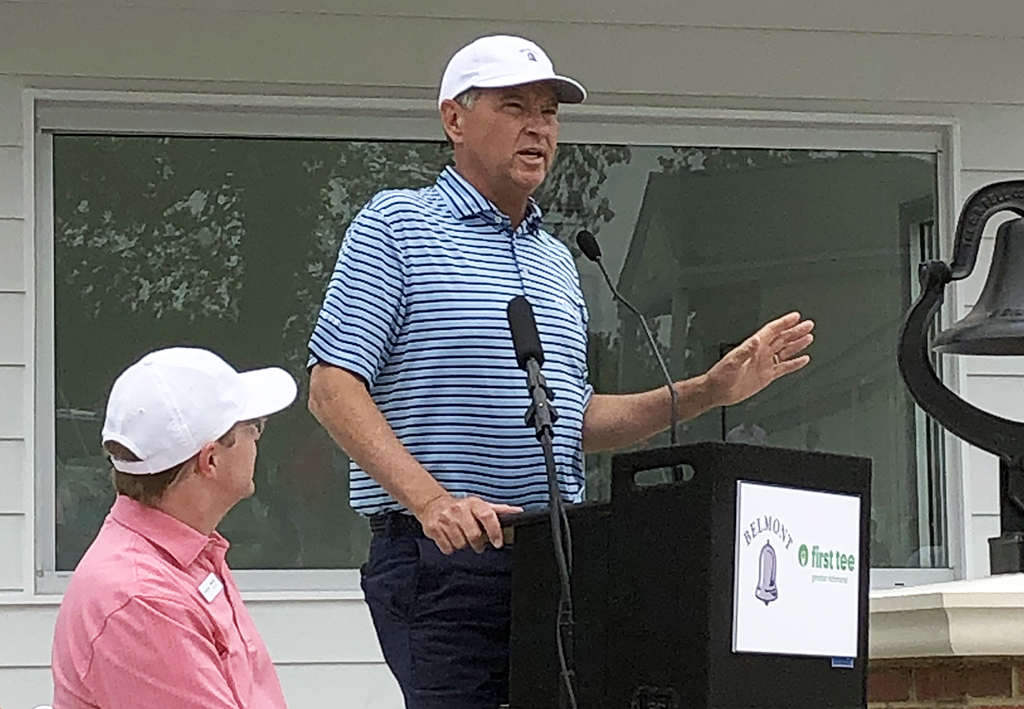 “This is the future of golf,” Love said at Monday’s ceremony, which also featured remarks from Henrico County Manager John Vithoulkas, Board of Supervisors members Frank Thornton and Dan Schmitt and First Tee of Greater Richmond CEO Brent Schneider.

Schneider, in an interview prior to Monday’s event, acknowledged that while Belmont closed for renovations in challenging times, it reopens in a boom time for golf in general. The game has been one of the economic beneficiaries of the pandemic, as it proved to be a widely accepted outdoor activity with built-in social distancing.

“We’re certainly aware of the spike in golf. Our other facilities have benefited greatly,” Schneider said, referring to The Elson Redmond Memorial Driving Range in the city’s Northside, and The Tattersall Youth Development Center at The First Tee Chesterfield Golf Course.

“We’re humbly excited,” he said. “We expect Belmont to be a busy place that a lot of people want to play.”

Schneider said the course overall is in great shape and ready for play, its only blemishes caused by Mother Nature washing out some patches of turf on Belmont’s massive new 18-hole putting practice area.

While those bare spots grow in, Schneider said the crew at Belmont has plenty to keep it busy – mainly maintaining the commitment it made when making its pitch to the county two years ago.

“Our work now is on the culture and our commitment in living up to the vision creating a facility that is inclusive, affordable and welcoming for all,” Schneider said. “That’ll be ongoing work.”

The county has owned Belmont since 1977. It purchased it from original owner Hermitage Country Club, which had run the course since its inception in 1917.

In addition to its allure as a Tillinghast course, Belmont also is known as the only course in Virginia to ever host a major PGA tournament — the 1949 PGA Championship won by Sam Snead.

But over the last two decades or so, the course and its infrastructure couldn’t keep up with the times and it was a money loser for the county nearly every year since 2000.

That’s when Henrico, led by Parks and Rec director Neil Luther, put out an RFP to find an outside group to take over management of the course.

“We could not ask our taxpayers to subsidize a golf course indefinitely,” Schmitt, the supervisor, said at Monday’s ceremony. “That’s not the Henrico way.”

It does not include the neighboring county-owned tennis courts, rec center and surrounding parking lots, which Henrico would continue to operate and maintain. The county will retain ownership of the overall 125-acre property.

It also included $750,000 from the county, on top of the money raised by the nonprofit through donations. The county had also previously set aside $500,000 to pay for necessary bunker improvements and it will put in another $250,000 in two years, according to the terms of the RFP. 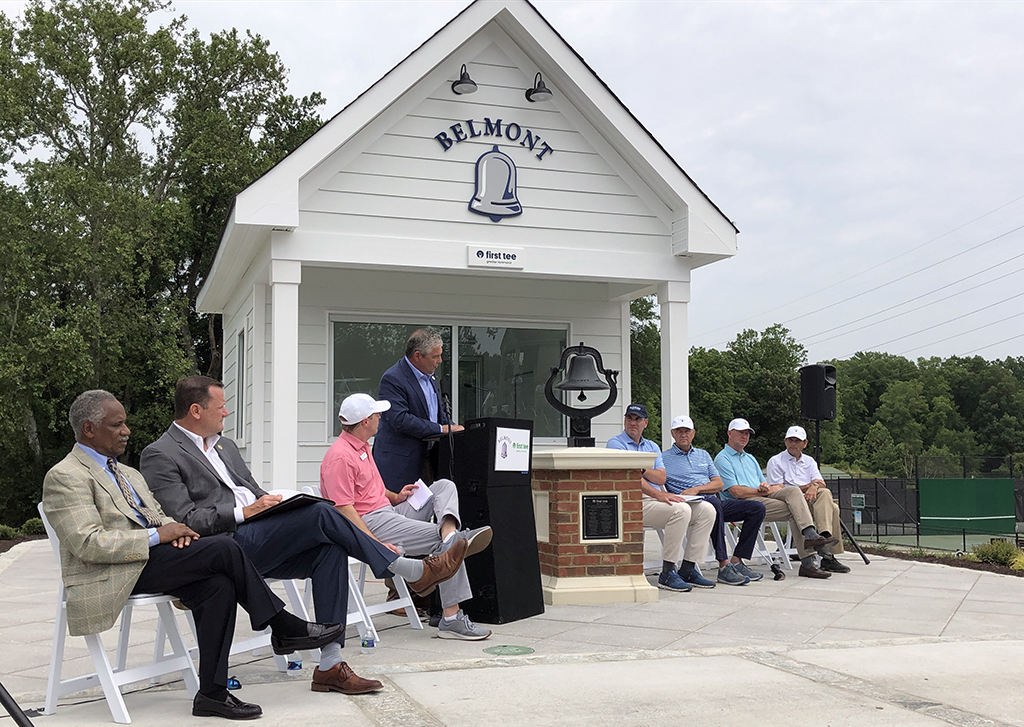 First Tee is required to contribute annually a minimum of 5 percent of Belmont’s gross operating revenue equal to or above $1 million into a capital reserve escrow account. That account is to be set aside for capital improvements and major repairs over time.

“It is theirs to run in accordance to their mission,” he said.

When it opens to the public this weekend, a walking round on the 12-hole course will cost $35 on weekdays and $40 on weekends. Carts are an extra $12.

It’s $10 for a round on the short course, dubbed Little Belle, or $25 to play it as much as you want all day. Access to the sprawling putting course is $5.

All kids involved in First Tee programs can play Belmont for free. All other kids get 50 percent off on both the main course and the short course.

Schneider said they also created a Founders Club annual membership that runs $2,700, allowing for tee times to be made two weeks in advance and access to tournaments throughout the year.

Capping Monday’s event was a group of First Tee students, a handful of kids of all ages who teed off from the first hole of the short course.

Apparently not feeling the pressure of dozens of grownups watching her, Meg Lavinder’s first shot nearly dropped in the hole after a bounce or two, sending the crowd into a frenzy.

Moments later, another of the students, D’Yan Robinson, whose drive went long, hit a chip shot from off the green that rolled into the cup.

The crowd went wild once again.

Not sure as an adult I would like the 12 hole format but it would be great for kids and would be a great High School golf format. Sometimes 9 holes is not quite enough but seldom after school would there be time for 18.

The county ran that track into the ground, that is why it was a money loser. Had they put even a modest effort into the upkeep, it would not have hit the skids the way it did. I am glad somebody who actually cares about the course is in charge now. Great news!

It can be tough for a municipal course to achieve a sustainable budget. A private course – even one open to the public – gets a ton of revenue from corporate outings and tournaments. Things like beer carts and awards dinners weren’t allowed on a county course like Belmont. Making it into more of a recreational/educational course (i.e. First Tee) would seem a wise way to preserve the course.

I would disagree. Dogwood Trace is one of the only things that has made Petersburg money and is a destination for people to come to Petersburg. Henrico County dropped the ball on the course. While it’s great that Belmont is reopening, if maintained it would have never gotten to this point and would have made a lot of money during the pandemic to carry them through for maintenance/ operating expenses, etc. Henrico’s previous management never wanted a golf course or knew what they were doing. It’s easy to blame others for lack of rounds played, while other courses in the… Read more »

Love the 12 hole course idea! Would like to see more places move to that format.