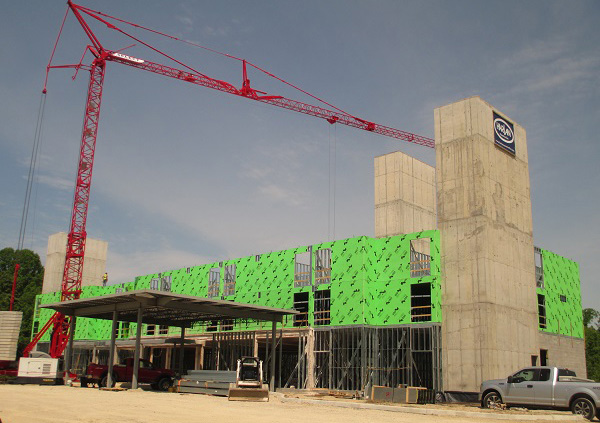 Steel framing is going up for the SpringHill Suites under construction in Chester. (Jonathan Spiers photos)

Visible to motorists along I-95, the newest property from a local hotelier is taking shape at the Route 10 interchange and is one of several new additions to the company’s portfolio.

Chesterfield-based Sina Hospitality is about midway into construction of its Marriott-brand SpringHill Suites hotel at 12301 Redwater Creek Road in Chester.

The seven-story, 122-room hotel is rising on the northwest side of the Route 10/West Hundred Road interchange. The 5-acre site is behind the Cracker Barrel restaurant and next door to the Fairfield Inn Richmond Chester, which is not tied to Sina.

The SpringHill Suites also will be neighbors with regional giant Shamin Hotels, which has three hotels in the vicinity and a fourth in the works.

Sina’s hotel is one of three that it’s actively working on, having just opened a Fairfield Inn last month in Louisville, Kentucky. It’s opening another Fairfield Inn in Louisville in June, and it’s also developing a Home2 Suites in St. Louis, Missouri, among other properties on the drawing board. 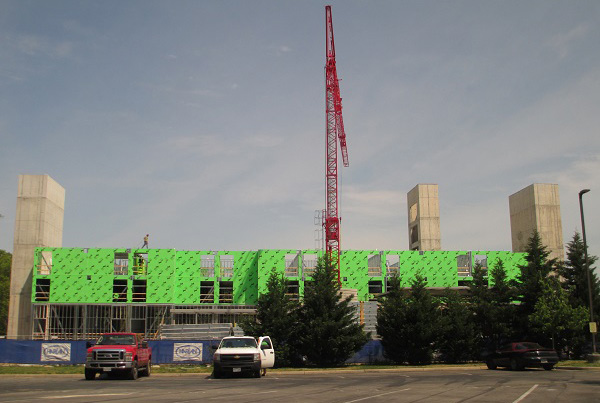 The seven-story building is rising behind the Cracker Barrel restaurant beside the interchange.

Construction on the Chester site started in November 2019, several months after Sina filed plans with the county and just a few months before COVID-19 hit.

CEO Ravi Patel said the Chesterfield-based company kept the project on schedule despite the pandemic’s impacts on the industry on the whole. 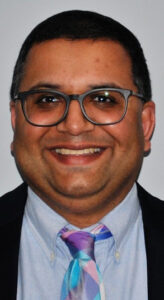 “We said, ‘Well, we’ve already started, so why stop,’ and then we just kind of pushed through,” Patel said.

Hopewell-based Harlan Construction is the general contractor, and Nitin Kulkarni with Glen Allen-based Design Enclave Consultants is the architect. Applegate Consulting Engineers is the structural engineer, and Petersburg firm The Site Design Co. is the civil engineer. Other firms involved include MEP Green Design & Build, out of Houston.

The $20 million project was expanded with an additional floor and four more rooms than initially planned. Targeted for completion in spring 2022, the hotel will include a 5,000-square-foot meeting space planned on its lower level and another 1,100-square-foot event space on the floor above that.

Patel said the accommodations will meet a demand that otherwise is routed elsewhere in the region.

“Having a hotel with 5,000 square feet of meeting space in Chester is not heard of,” he said. “We think it’s going to be a unique opportunity to bring people that maybe don’t want to go to Short Pump or Midlothian and just want a nice, fresh hotel that’s centrally located.”

The hotel will be the third SpringHill Suites in the region, joining two in Henrico: the Richmond Northwest property at 9960 Independence Park Drive, off Gaskins Road near the I-64 interchange; and the Richmond North/Glen Allen location at 9701 Brook Road, just north of I-295. Those hotels are owned by Richmond’s Apple Hospitality and New York-based MCR Hotels, respectively.

The Chester location will add to 26 properties that make up Sina’s current portfolio — up from 15 hotels in 2019. In Central Virginia, it owns four hotels: the Fairfield Inns on North Pinetta Drive in Chesterfield and Airport Square Lane in Sandston, along with a Candlewood Suites on Woods Edge Road in Chesterfield and a Hampton Inn on South Crater Road in Petersburg. 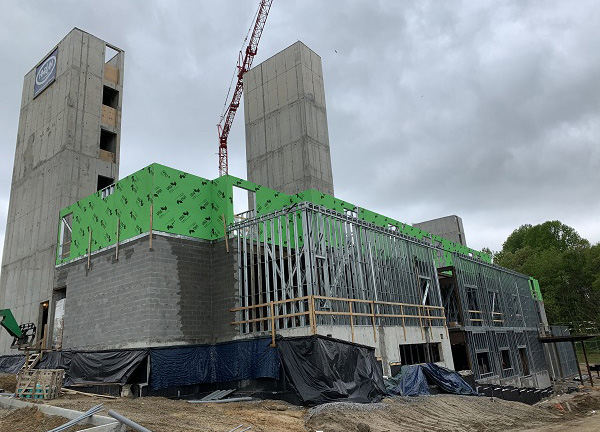 The construction site of the SpringHill Suites as it appeared in April. (Courtesy of Ravi Patel)

It’s also developing two Townplace Suites in the region: one at 101 N. Providence Road in Midlothian, and the other at 5252 Airport Square Lane in Sandston. Both hotels are scheduled to open in 2023.

Founded in 1997, Sina now has 3,000 employees — a workforce that Patel said was spared any layoffs or furloughs over the course of the pandemic. He attributes that feat to the locations of its hotels and federal assistance through PPP loans.

“The last year has actually been pretty good,” Patel said. “We didn’t close any of our hotels.”

He added, “I think a lot of that has to do with how we pick locations. We’re always in suburban locations for our hotels; we’re not in downtowns or at the beach.

“On the real estate side we saw a lot of landowners wanted to unload their land, just because they were tight on cash. That presented a lot of buying opportunities, which is one of the reasons we’ve been able to grow a bit more.”

Among those opportunities was a property in Charleston, West Virginia, which Patel said Sina recently picked up. It’s planning a Residence Inn there that Patel said he hopes to open in late 2023.

The company’s footprint beyond Richmond extends to Lexington, Kentucky, and Memphis, Tennessee, in addition to its Louisville and St. Louis properties.

This will be a great addition to Chester. Love the investment by Ravi and Sina.