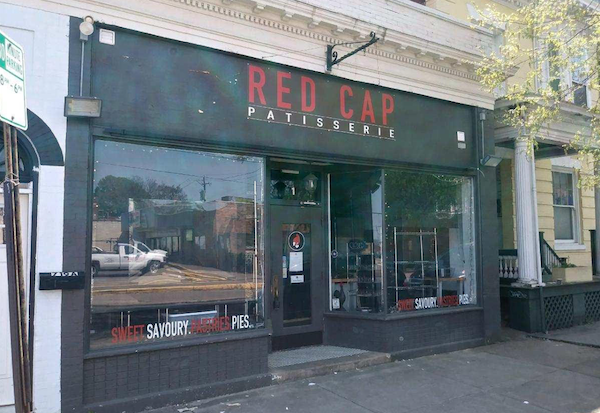 Market on Meadow is a shared retail and kitchen space that’s slated to open at 719 N. Meadow St. in July in the former Red Cap Patisserie. (Jack Jacobs photo)

Farmer’s market friendships sowed the seeds of a new three-in-one market concept coming to the Fan.

Combining retail sales, a shared kitchen and a sit-down dining area, the market also will feature a commissary kitchen program for other users.

Each of the three tenants will continue to operate as an independent brand. Each concept will have a separate menu and retail offerings, and will each facilitate its operations at the market with its own staff, Column 15 co-owner Victoria Goldsby said.

The owners of Auntie Ning’s came up with the idea for the market and enlisted Column 15 and Polpetti, which they were familiar with from local farmer’s markets, Goldsby said.

“We built this relationship over the course of seeing each other consistently,” she said.

Column 15 recently opened a coffee shop near Williamsburg and sees the market as a way to grab more business in the Richmond area, where it has been selling at farmer’s markets for the past three years.

Column 15 plans to use the market as a retail and cafe space, selling coffee it roasts at its space in the Historic Triangle.

“The market is an expansion of our brand even further into the Richmond scene,” Goldsby said, adding that the company is betting the lower cost of a shared space will help it elbow into Richmond’s crowded coffee landscape. Goldsby co-owns the company with James Kroll.

Polpetti makes and sells Italian food as well as Italian staples like pastas and sauces. It recently moved out of a space at Hatch Kitchen to take up residence in the market, co-owner Georgia Riccobono said. The company was founded by Riccobono’s husband and co-owner Peter.

Market on Meadow is expected to open in July. Red Cap closed as a result of the coronavirus pandemic last year and never reopened.

So I guess Red Cap closed? That’s too bad, but congrats and best wishes to the new proprietors.

Still waiting to see if the Bar (something) home of the Bottom Burger ever actually opens. Never seen it open a single night since work appeared to be completed. Interesting location for the shared space. Red Cap counter/display space was so far forward and even behind them the space did not seem very large. Interesting to see how these three configure it Location get very little foot traffic and has zero street parking from Monument to Broad and for most of Broad Street.

It’s a prime spot to do deliveries, and it’s right off the Pulse line so it could get traffic from them, plus there are a bunch of apartments north of Broad and they don’ have anyplace else to go to grab a quick bite.
Plus they are close to the hardywood/Mainline brewery/distillery, maybe they can do consistent pop ups there?

Has a pulse rider the stop I use, and the closest to this spot, is Allison Street and I have never seen that many people walk east a block even to the 7-11. Usually 2-3 people get off at Allison. In fact I am not sure I have seen out of 50 or so trips in the last 6 months maybe 1-2 person ever get on the Pulse with groceries from Whole Foods.