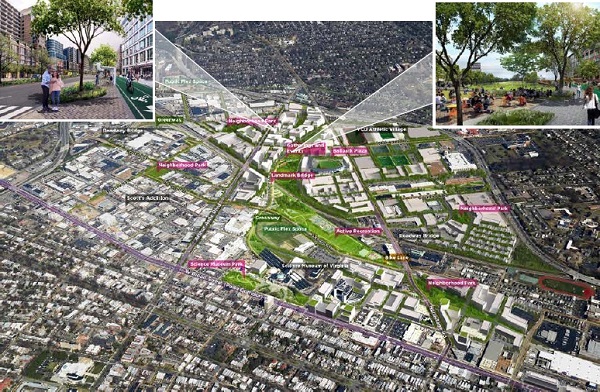 An aerial of the “Greater Scott’s Addition” area as envisioned in the Richmond 300 master plan. (BizSense file)

A swath of the city that’s prime for new development is a step closer to being more fully realized after a major zoning overhaul that’s also opening the door to the eventual redevelopment of The Diamond.

The Richmond City Council on Monday approved two zoning initiatives that change and consolidate the land use designations for much of the areas north of Broad Street generally east of Scott’s Addition, where a surge in development activity over the past decade is spilling over into what some are coining “the Diamond District.”

Like Scott’s Addition, that district — generally areas around the baseball stadium between the railroad tracks and the interstate — has begun transitioning from a primarily industrial and manufacturing district to one with a greater mix of uses, including residential and retail.

The zoning changes approved Monday reflect that transition and are meant to help guide and facilitate further growth, in part through a reduction of applications for special-use permits that otherwise have been needed to accommodate newer development there — an area that city planners have referred to as “Greater Scott’s Addition.” 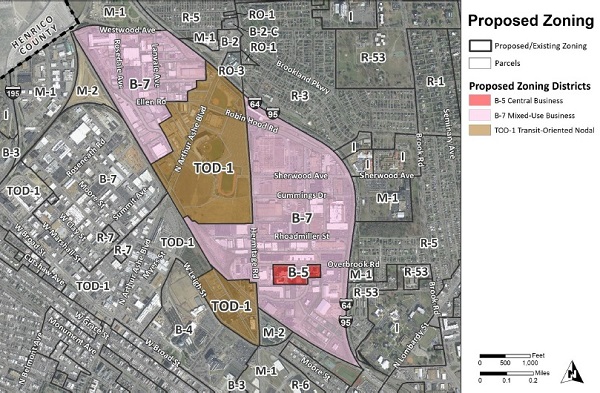 The new “Greater Scott’s Addition” zoning map. (Courtesy of the City of Richmond)

That designation has already been applied along other parts of the GRTC Pulse rapid transit bus line along Broad Street. It encourages denser, mixed-use development that’s designed around walkability and multimodal transportation.

Also emphasized in the new zonings is the city’s B-7 Mixed-Use Business District, which now makes up most of the area north of Scott’s Addition and east of Hermitage Road. The area between Hermitage and Arthur Ashe Boulevard — including the 60-acre, city-owned assemblage that includes The Diamond — is now TOD-1.

Both designations have been implemented in and around Scott’s Addition, encouraging that area’s transition from an industrial district to a mishmash of apartments, offices and breweries.

But the TOD-1 zoning for The Diamond and other city-owned properties is aimed at another goal — a long-sought redevelopment of that site that would add to the city’s real estate tax revenue and provide a new stadium in a nearby location. The latest plans show the new venue being built in the area of the neighboring Sports Backers Stadium.

Leonard Sledge, the city’s economic development director, said the rezoning to TOD-1 makes the city land more attractive to developers and sets the stage for a long-anticipated request for proposals for the site.

“Once the city’s properties are rezoned from (industrial districts) to TOD-1, the value of the land will greatly increase and therefore provide much greater revenues to the city,” Sledge said in an email last week, adding that a request for offers would be issued by the end of this year. 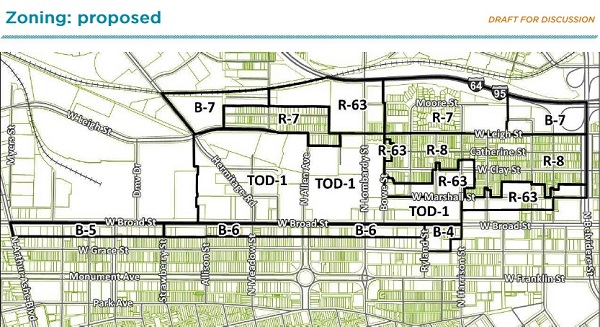 Pulse zoning changes emphasize TOD-1 zoning instead of B-4. (Courtesy of the City of Richmond)

Farther south and east along Broad Street, a separate area-wide rezoning was approved for land in and around the Carver and Newtowne West neighborhoods, generally between Hermitage Road and Belvidere Street north of the Fan District.

The rezoning calls for lesser building heights than a previous proposal and integrates TOD-1 on land north of Broad Street between Hermitage and Lombardy Street. It also reassigns some classifications in established residential areas and puts B-5 and B-6 zoning along the south side of Broad.

Where the previous proposal focused heavily on B-4 Central Business District zoning and would have allowed heights of 20 stories or more on some spots along Broad, the TOD-1 emphasized in the new version limits buildings to 12 stories. B-5 limits building heights to five stories and B-6 generally encourages four stories.

The changes come with different parking requirements, which was a concern to Planning Commission members when they voted in support of the plan earlier this month. They did so with a caveat: that the city explore a parking overlay for the area that would address the neighborhoods’ specific parking challenges.

City Councilmember Katherine Jordan, whose Third District includes the area, acknowledged the overlay request in her vote to support the rezoning Monday, as well as a recently approved proposal to amend the city’s zoning code to eliminate parking space minimums.

In light of those moves, and recognizing that concerns with the changes remain among some property owners and neighbors, Jordan said she was willing to support the rezoning now with the understanding that an overlay could be worked in later.

Like the Diamond-area rezoning, the north-of-Broad changes set the stage for new development in the area, which is home to the fast-developing Sauer Center and surrounding Sauer-owned properties, as well as a 12-story building currently under construction at Broad and Lombardy.

Zoning the south side of Broad St for anything less than TOD-1 (should have been B4) is a total negation of transit oriented development and the principles of the master plan. It is shocking and saddening to see some of the most important zoning changes in the recent plan gutted. I’m extremely disappointed in our officials for caving to isolated private interests after a years-long comprehensive planning process. This mistake will ripple through the city for decades. At a time when awareness about the interconnection between planning, climate change, transportation, racism, and the housing crisis is at an all time… Read more »

“Transit oriented development” is a scam. It is just an excuse to squeeze the most square footage out of property without spending the money to provide adequate parking for residents who most certainly will own cars. We have already seen a massive reduction in street parking with the implementation of the Pulse and a loss of business from retail in those zones. Unless you are a VCU student, you will have a hard time navigating this city without a car. Go ahead and roast me!

So true; TOD is a resulted in ZERO affordable housing and most of these towers are beyond cheap in their construction yet pricey in their rent. And if those on Council and on here were that concerned with equity and affordable housing so were is the requirement/allowance that yes we will allow taller tower by right but if you say want to go over 6 floors you must require a certain percentage as affordable units. As an example you want to build 12 floors then 25% of the units must by affordable and 10% must be for Extreme LMI renters.… Read more »

cities should be designed and built for people, not cars. Those who prioritize cars should live in Short Pump

And those who can afford, such … Do!

“At a time when awareness about the interconnection between planning, climate change, transportation, racism, and the housing crisis is at an all time high, our city has failed to take action on an epic scale.” That people applaud a comment which includes this sentence is astounding to me. Here is a recent comment submitted by New York Times reader “Sophia” of Bangor, Maine: “I have one child, a daughter, who told me age 8 that she would never have a child because of global warming. She’s now 34 and has never changed her mind. So I will not experience a… Read more »

The issues here, as I see them, aren’t climate change or racism. The issue is reasonable development and density. And yes, parking. The automobile isn’t the enemy. Richmond can have a walkable, bikeable, and driveable city. Many of the visitors who come to our most popular entertainment areas (i.e. Scott’s Addition and Carytown) live in the counties and are not taking public transportation. Same holds true with most downtown workers. Adequate parking is a must for sustained growth. How important is parking? Just ask the small businesses who rely on it for their customers. Their input should have priority.

I typically don’t engage in back-and-forths in the comments section, but I have to respond to this idea: “The automobile isn’t the enemy. Richmond can have a walkable, bikeable, and driveable city.” Please provide an example of a city that is highly walkable and has a great transit system, where it is also easy to drive and find a place to park. These are, in fact, mutually exclusive goals. Cities designed around cars and cities designed around walking are simply not the same (try crossing a highway on foot). Of course some businesses need parking now, but the transition from… Read more »

people going out to drink should not be driving. The solution is Uber

Why do some people think Scott’s Addition is a beer soaked Sodom and Gomorrah?

Any examples you can give of a ‘walkable, bikeable and driveable city’ would be most welcome.

I’m glad they are upzoning the City of Richmond to make better at being a people sink in terms of not paving over new forests.

Sherwood Park was cut in half by the highway just as it was being built, separating the neighborhood from streets like Robin Hood Road and Sherwood Park Ave. Unlike pockets in Scott’s Addition, any residential below the highway didn’t survive the conversion to industrial. While this area may get a new name, and may even lose the streets that were set to define it, part of this mixed use redevelopment needs to reconnect this area to it’s neighbors. There are some great plans for parks, bridges, and bridge-parks to the south, but nothing has been proposed for the highway underpasses… Read more »

Agreed- “Welcome to Richmond, the Unwalkable Walkable City” doesn’t have quite the ring the planners intended. Nobody is going to feel safe traversing the weed covered, trash strewn shoulders in that area. Addressing the hard lines imposed by the interstate system and other highways should be a priority – Improved sidewalks, Pedestrian and bicycle bridges and tunnels would go a long way to fixing some of that.