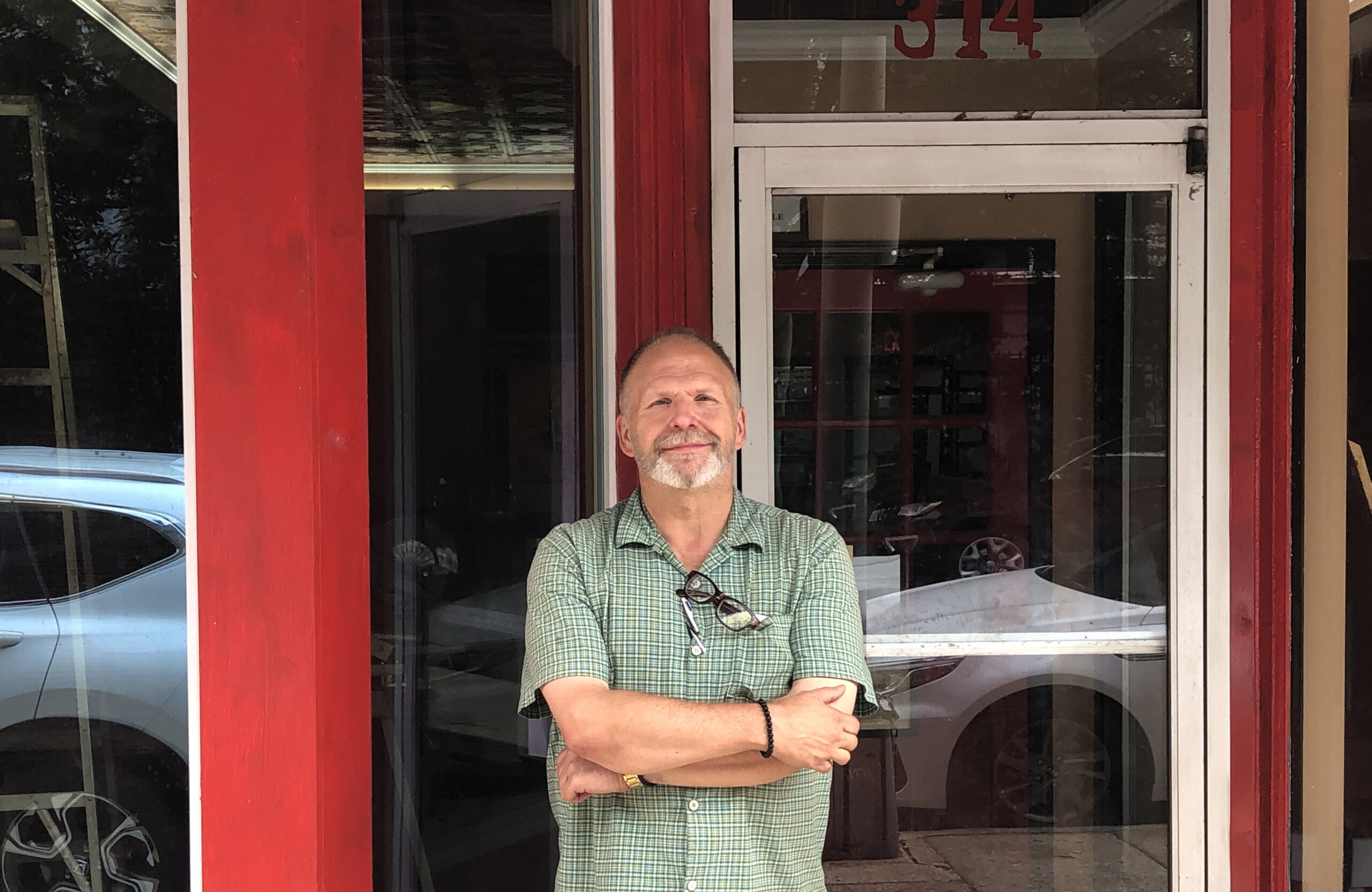 William Wright outside the former Red Door Restaurant space. Wright most recently owned Bistro 27 on Broad Street and is getting ready to open a wine bar called Henley on Grace. (Mike Platania photo)

When William Wright opened Bistro 27 at 27 W. Broad St. in 2005, dining options in that section of downtown were limited.

“It was Ted (Santarella, the late founder of Tarrant’s Cafe), us, Comfort, and where Bar Solita is now — Popkin Tavern,” Wright said of his then-contemporaries in Monroe Ward. He said he and his staff would often walk down the block to grab drinks at Popkin at the end of the night.

Before his shifts at Bistro 27, Wright said he’d frequent perhaps the longest tenured restaurant in the neighborhood: The Red Door Restaurant, which sits a few blocks away at 314 E. Grace St.

Over the years Wright got to know Red Door owners and married couple Joe and Sheila Folley, who ran the Greek, Italian and American fare spot for decades. They closed it on what was supposed to be a temporary basis in the early days of the pandemic.

Then, in early 2021, shortly after Wright made the difficult decision to close Bistro 27 after 15 years, the Folleys made a comment to him that would end up paving the way to Wright’s return to the restaurant business.

With the Red Door on the way out and Wright still hungry for more, he’s now preparing to take over the space and open Henley on Grace, a wine bar with over 100 types of wines.

Wright said he struck a deal to take over the Grace Street space from the Folleys, who could not be reached for comment. Wright said he thinks the couple didn’t want to reopen during the pandemic, especially while they were considering retirement.

“I can’t speak for Joe or Sheila, but they’d been doing it for a very, very long time. For a restaurant to be there for 30-plus years — I’m trying to think of a restaurant in (the neighborhood) that’s been here that long. I can’t think of another,” Wright said.

While Bistro 27’s closure gave Wright a break after a lifetime in hospitality, he said he missed the restaurant business.

“I felt like I gave birth to 27, and to shut it down was very painful,” he said.

He said a wine bar was something his patrons at Bistro 27 suggested he bring to the neighborhood.

“It’s definitely going to have the feel of a true wine bar, and it’ll be very contemporary,” he said. “If people want to come before or after going to the theater, on weekends I’ll be open until 11 p.m. and 10 p.m. on weekdays.”

Glasses of wine at Henley will range from about $7 to $30. Wright has a system planned that’ll allow customers to try some of the finer wines on the menu without purchasing an entire bottle.

“As long as you order two glasses, I will open any bottle. Then I have to pray to God that within seven days you’ll come in and have two more glasses. Because I’ll drink the fifth and sixth,” Wright said, laughing.

Henley on Grace will have a full food menu, one that will lean on sautéing for preparation and stray away from heavy dishes.

“It’ll be very light, fresh, almost like Californian cuisine. We’ll have handmade and hand-rolled pasta and we’ll be cutting our own fish and meats,” he said.

“A lot of food has buckets of cream and buckets of butter. I’m not saying that’s not good. But I want something where people are going to want to come three or four times per week.”

Henley on Grace will also have a small plates menu available for those sitting at the bar or lounge area. Wright said he’s planning to also be open for lunch Wednesday through Friday and brunch on the weekends.

The Henley is expected to open in early October. Renovations are underway, though Wright said the 1,500-square-foot dining spot needs only cosmetic upgrades. The Folleys continue to own the building.

He said Henley on Grace won’t have any traces of the color red, except for in one area.

“I am taking the sign down. But on the wall near the bathroom, it’ll have information all about the Red Door as an homage to Joe and Sheila,” he said.

The name of the wine bar and bistro is also an homage to Wright’s past.

In the 1980s, while working for Ritz-Carlton Hotels and living in D.C., Wright said he had a meeting with a prospective client at the Henley Park Hotel, which is still open near D.C.’s Logan Circle neighborhood.

The meeting went well, and it was in Henley Park’s restaurant where Wright said he closed his first big piece of business.

“Being young and getting into the business, I thought I was a millionaire,” he said.

“(After Bistro 27 closed) I said to myself, you know if I get involved with another restaurant, I’m going to call it Henley, and it happens to be on Grace. So what better way for the public to know where it is, than to call it Henley on Grace.”

Looking forward to the opening of Henley! I enjoyed Bistro 27 and sure I’ll have good experiences at the Henley. Best wishes and much success in your new venture! Neil

Anyone else remember when Mr. Wright vowed in the RTD, less than a year ago, to never open another place in downtown Richmond? I suppose that after a much needed break he realized the potential. Welcome back. Sounds like a great concept.

Was i because of Antifa?

This is fantastic news! So glad that you’re back on Richmond’s restaurant scene. Looking forward to the Henley on Grace!

WELCOME BACK Mr. Wright. I am looking forward to enjoying the high level of dining in the downtown Richmond area that you will bring. I was sorry when you decided to close Bistro 27 but I know Henley on Grace will provide many evenings of enjoyable experiences. THANK YOU for returning to the Downtown Richmond Restaurant scene.

This is great news, but…

YES, Mr. Shakey, I caught the mistake as well.I spoke to quickly without thinking. I will be pouring a just over 6 ounces of wine per glass, about 4 glasses per 750ml bottle. I have always poured heavy for the guest. Hope to see you in October 2021. Introduce yourself, and the first drink is on me..

There is actually a gizmo – can’t think of name or brand, but a friend had some – that lets you insert a sealed pourer through a wine cork, allowing you to pour without opening the bottle. I’m sure it’s not perfect – it inherently introduces some air – but seems like it might be a viable way of offering higher end wines by the glass with less waste.

This is such incredible news to have you back! You already mean so much to the revitalization of downtown. Henley on Grace will be awesome!! Can’t wait!

This is great news! Looking forward to seeing you, William at the Henley!