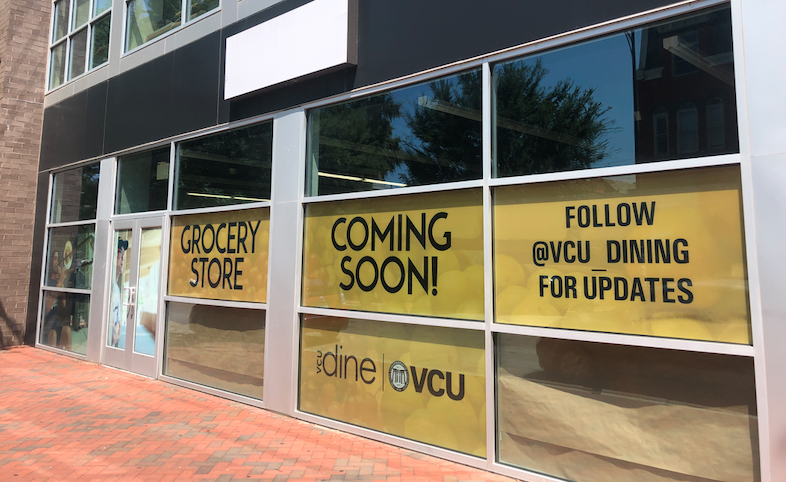 VCU plans to open a grocery store at 912 W. Grace St., which was formerly the site of a Walmart. (Mike Platania photo)

The Rams are behind one of the region’s latest neighborhood markets.

The market will sell groceries as well as to-go coffee and made-to-order sandwiches. The store won’t carry alcohol.

It will take the place of a Walmart that occupied the 4,100-square-foot space until July 2019. Ram City Market is expected to open either late fall or early spring.

The store will be open to the public. Student customers will be able to use their meal plan accounts at the store.

It will be on the first floor of the Grace Street Center, which is home to the university’s procurement office, university relations and the global education office.

The market will be operated as part of the university’s existing contract with dining services company Aramark. The store’s seven to eight workers will be Aramark employees, VCU spokesman Mike Porter said in an email.

Ram City Market comes amid several other neighborhood market concepts that have recently opened or are on the horizon around the region. Chef Carlisle Bannister is planning to open a market in Tuckahoe Shopping Center. Sen Organic Farmers Market opened in Carytown earlier this year.

The neoliberal experimentation continues…. VCU, not satisified with educating students with underpaid professors, now wants to further compete with local groceries and convenience stores… anyone else tired of living in ‘Ram City’? These are our tax dollars, folks…

Did you even read the article? You think it is unusual, or experimental, for a university to have a retail operation on campus? Have you ever visited or attended a university? The article also states that it will be run by Aramark, who also ruin the other food operations at VCU, as well as those at numerous corporate offices in the area.

You guys do realize Aramark is running this market? From the Aramark investor relations page: ABOUT ARAMARKAramark (NYSE: ARMK) is in the customer service business across food, facilities and uniforms, wherever people work, learn, recover, and play. United by a passion to serve, our more than 270,000 employees deliver experiences that enrich and nourish the lives of millions of people in 22 countries around the world every day. I don’t think they are going to be staffed by Antifa super soldiers. Scott Burger: As a taxpayer what exactly is your issue with having a convenience store on VCUs campus? SA Chaplin: The “free market” has… Read more »

I see you haven’t read much of Scott’s work. You’ll want to google him and read a bit.

It is an Aramark run operation, on a state university property. Walmart didn’t work out there. They are trying to provide food options for the students. It is bizarre to me that this would be considered controversial.

Will Antifa make vaccines mandatory at the store?

Scott is a leftist…

The property is not owned by VCU. It is owned by the VCU Real Estate Foundation which is not a state agency but rather a private entity.

Aren’t they a front for the Trilateral Commision ?

At least VCU has the best chance of adding solar panels 😛

This could be a useful amenity for students who can’t make the walk to Kroger. A worthwhile addition to the multiple fast casual dining options on campus. Another, albeit small, reason that downtown Richmond’s rebirth over the past generation is usually linked to VCU.