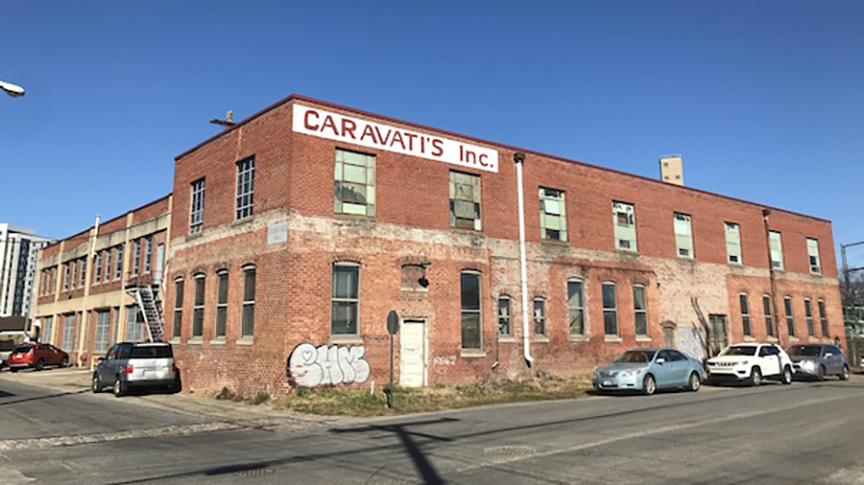 The salvage company’s decades-old warehouse is among the Caravati’s holdings being sold. (Mike Platania photo)

A quartet of local developers has teamed up to breathe new life into a Manchester warehouse.

The Caravati’s building at 104 E. 2nd St. has been acquired for $2.1 million by a group including Justin Paley of Catalyst Development Co., Nolen Blackwood of Blackwood Development, Ali Semir of James River Housing Partners, and Ralph Reahard of Real Property Management.

They plan to preserve and convert the 97-year-old building into 42 apartments. Caravati’s, an architectural salvage firm that’s used the building for decades, recently moved out and relocated to downtown Ashland.

Paley said he and his business partners considered a few different options, but decided to renovate the building in lieu of building anew.

“There’s not a lot of historic inventory left, so to be able to find one that works is a nice opportunity,” Paley said. “We thought (renovating it) was one of the best options just in order to retain some of the historic fabric and make use out of the resources that were existing. For us, that was the best fit.”

The apartment complex will be called “The Rails,” which Paley said is an homage to the railways that surround the property and the area’s heavy industrial roots, as well as the nearby Richmond Railroad Museum on Hull Street.

Paley said the four partners in the deal have known each other for some time and coalesced to take on the Caravati’s project.

“Richmond’s a small town, and we’re all guys about the same age looking to do interesting, fun projects,” he said. “We’ve always just sort of kicked around ideas.”

City records show the developers’ acquisition of the Caravati’s building closed Aug. 26. The real estate was most recently assessed by the city at a combined $506,000, and an entity tied to the Caravati family was the seller.

The 2-acre property has already been rezoned to allow for the conversion.

The 42 apartments will be split evenly between the building’s two stories, and Paley said it’ll be a mix of one- and two-bedroom units renting at market rate.

“As with anything that’s 100 years old, it’s going to need some TLC but that’s kind of the name of the game,” Paley said. “(The building’s) in pretty good condition. It’s very sturdy, heavy industrial construction so we’ve got a lot to work with.”

Walter Parks Architects is the project’s designer and KBS is the general contractor. First Community Bank is the lender and Jennifer Mullen of Roth Jackson is the developers’ legal counsel. The developers are planning to pursue historic tax credits to help fund the project, the total cost of which was not disclosed.

Paley said they’re looking to get through the permitting process soon and begin work on The Rails, with plans for a fall 2022 completion.

Congrats to Justin Paley for putting this together. The Rsils is a fitting name and I’m glad they’ll restore and adapt the old building. It’s been a long process for Caravati’s and Ashland is an interesting choice for their relocation. I’m seeing a renewed interest in Ashland as a destination these days.

The map embedded at the end of the article has parcels highlighted in blue on both sides of E 2nd St. One side with the large warehouse discussed in this article. The other with just some small buildings and a scrapyard looking area. Curious to know if this area across the street is just going to be surface parking for the 42 apartments going into the big building? Crossing my fingers that is not the case. Obviously people need parking but with this so close to Hull Street I’m hoping we have more creative options than dedicating half a city… Read more »

I think I read that they will build new apartments on that site.