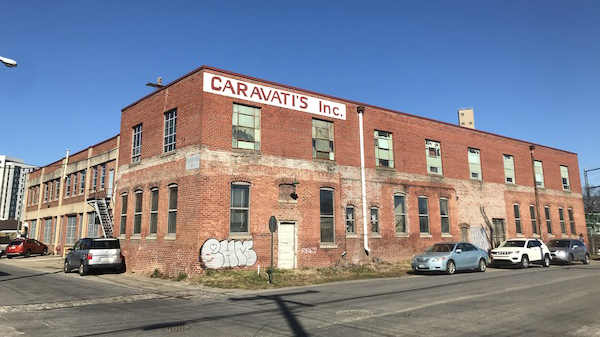 The decades-old salvage company’s warehouse is among the Caravati’s holdings being sold. (BizSense file photos)

The redevelopment of a Manchester warehouse and a Shockoe Bottom surface lot each took a step forward Monday.

The city’s Planning Commission recommended approval of rezoning requests for the Caravati’s warehouse in Manchester, as well as at 300 and 400 Oliver Hill Way in Shockoe Bottom.

The Caravati’s property spans five parcels across two acres near the intersection of East Second and Stockton streets in Manchester. Last year, the architectural salvage company listed its land for sale and by February had it under contract to a mystery buyer.

The contract purchaser’s identity was revealed Monday to be Catalyst Development Co., which is run by local developer Justin Paley. Some of Paley’s recent work includes The Spur in Scott’s Addition and 20-22 E. Broad St., an Arts District building he recently renovated and sold.

Paley, through attorney Jennifer Mullen of Roth Jackson, is requesting to rezone the Caravati’s site to B-4 Central Business district.

Details about what type of project Catalyst has in mind for the Caravati’s site remain unclear. Its rezoning application does not outline its plans, and Paley wasn’t available for comment by press time. 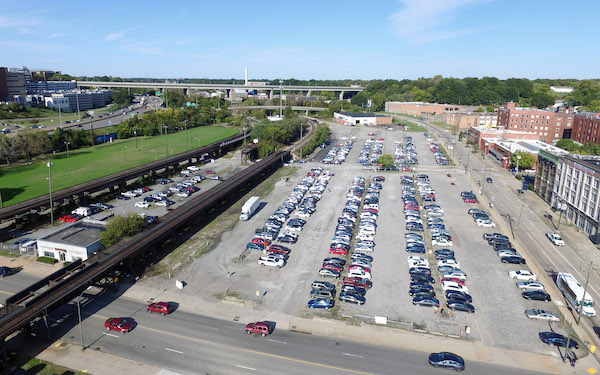 The 5.3 acres planned for a mixed-use development are bound by East Broad, North 17th and Oliver Hill Way, near the East Broad Street exit off I-95.

The Loving family owns the land and is working with local developer Charles MacFarlane and Porter Realty’s Cliff Porter to bring a mixed-use development to the site. As of last fall, it had drawn the interest of grocery tenants.

In an interview after the meeting, MacFarlane said they’ve tweaked some parts of the project’s design but couldn’t comment much further.

“We’re continuing to work on the project. I can’t say too much about what we’re doing but I’ll say there’s been some good quality interest from multiple good quality firms,” MacFarlane said. “We still have some work to do but this is a big, important hurdle for us to be able to get in a position to do this with the Lovings.”

Lory Markam of Markham Planning is assisting MacFarlane, the Lovings and Porter with the rezoning effort. MacFarlane added that they’re also working with engineering firm Timmons Group and 3North architects.

The Lovings also own an adjacent parcel to the west where the city’s planning to build the Enslaved African Heritage Campus, a slavery memorial and museum that’s been years in the making.

The city’s mulled the idea of acquiring the Loving’s portion of the land for the memorial through eminent domain. But the Lovings, through their attorney Stephen Clarke of Waldo & Lyle, have pushed back, saying they’re not opposed to the museum and would be open to selling the property to the city but do not agree with potential eminent domain.

Reached Monday, Clarke said they haven’t been contacted by the city or any right-of-way agent or appraiser for the city.

The Planning Commission also recommended approval for a rezoning that would allow for a 5-story, 52-unit apartment building at 711 Dawn St. The planned Northside project is currently a pair of industrial buildings.

All three rezonings are now scheduled to be heard by the City Council at its May 10 meeting, where the matters are all on the consent agenda.

“Caravati’s has operated at the site since 1939, according to its website. While the age of the original structure is unclear, an addition was constructed in 1924, according to a search at the website of the city assessor’s office.”

That took me five minutes. A subscription to the city’s land records website could tell you a lot more. I don’t know if Catalyst intends adaptive reuse, but it would be great if BizSense could include these details regularly in its stories. Richmonders deserve to know the legacies of projects as they are proposed and move forward.

Caravati’s may have been in the area since 1939, but they operated out of a different location across the street as recently as the 1990s. Historical details are great, but you can’t just scrape them off a corporate website.

All eyes have been on Caravati’s for several years as we’ve followed the marketing of the building. I’m glad to see a local developer with a good track record get control of it. Its not an easy development to figure, despite the phenomenon growth of Manchester. I was on the top floor of Shiplock Watch II yesterday afternoon with Guy Blundon and we played “spot a building” as we ID’d South Falls, Rivers Edge, The Terraces, 7West,and the fast rising Hydra. The growth has been somewhat amazing, and there’s so much more coming our way soon. When I first moved… Read more »

I can’t wait to see that parking lot developed. I’m sure Charles will put together the kind of project a high profile site like that deserves.