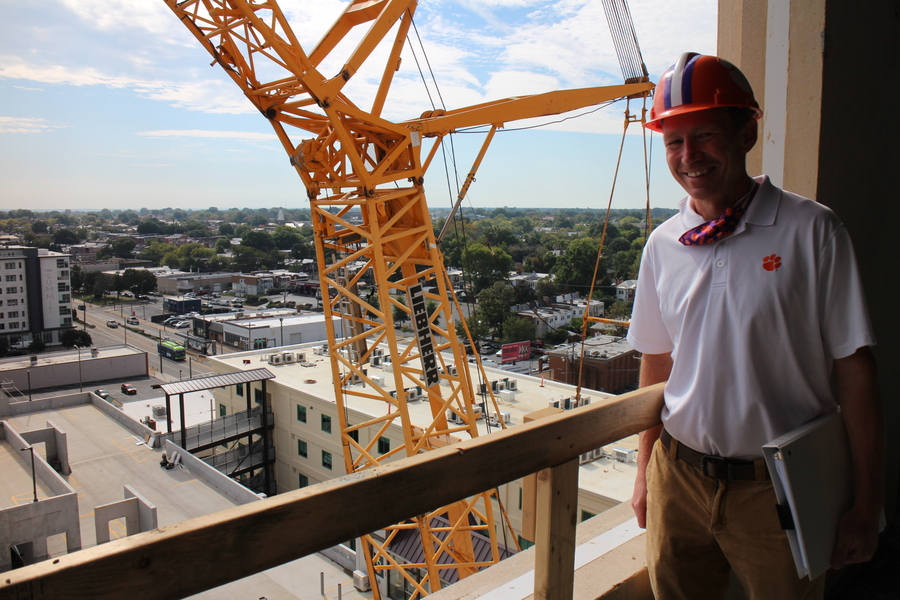 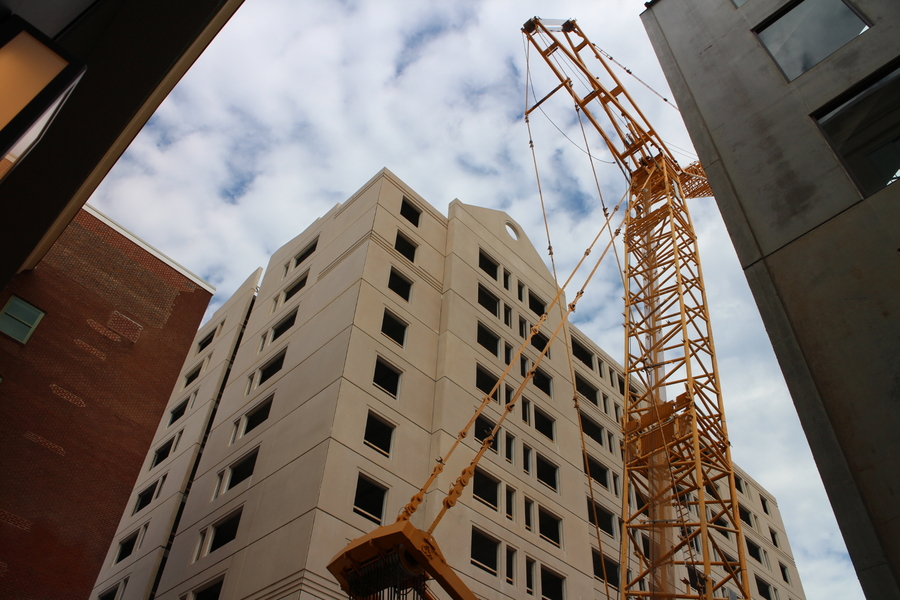 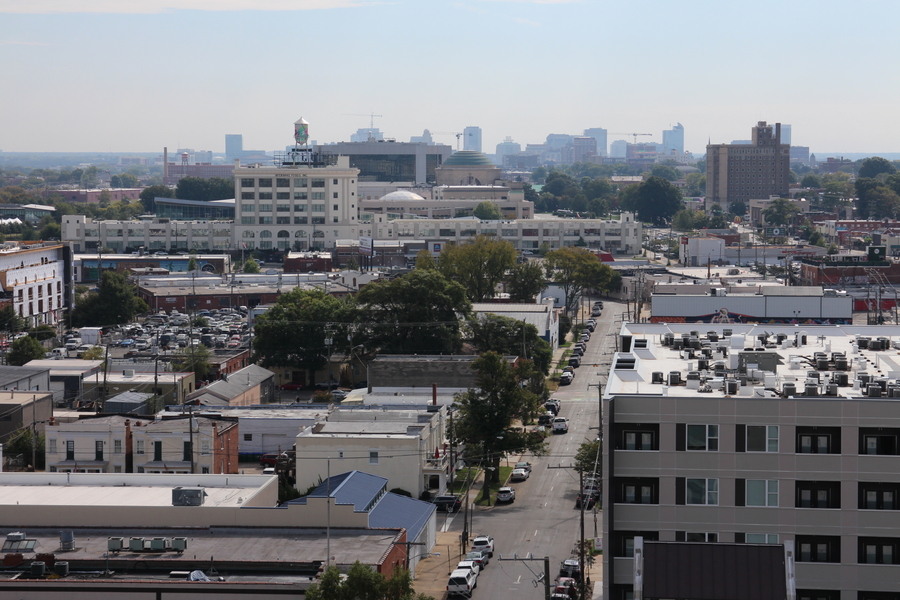 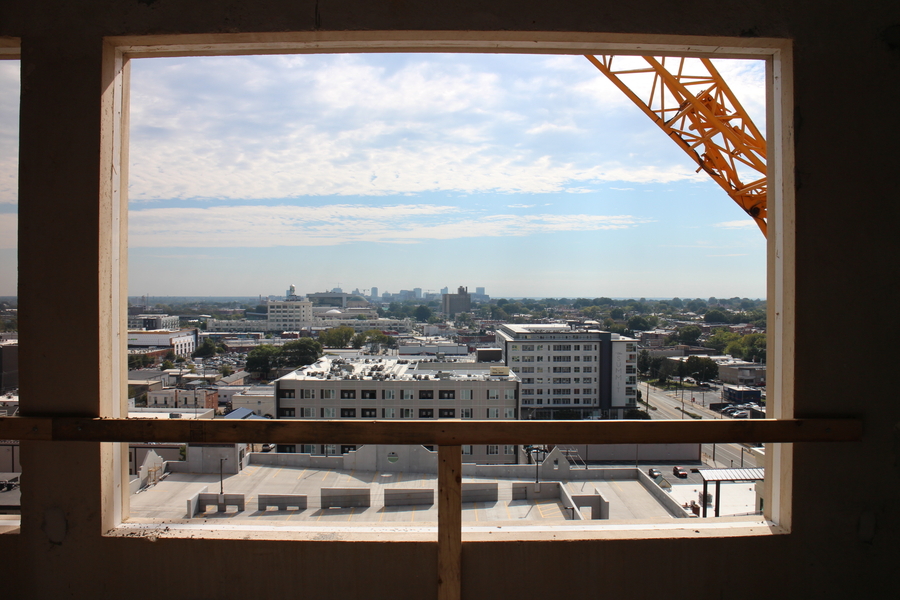 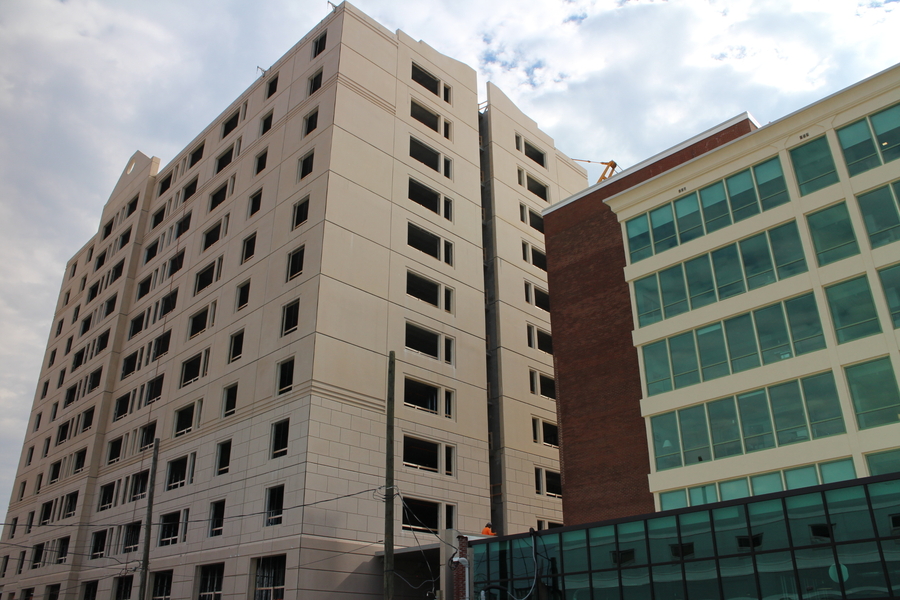 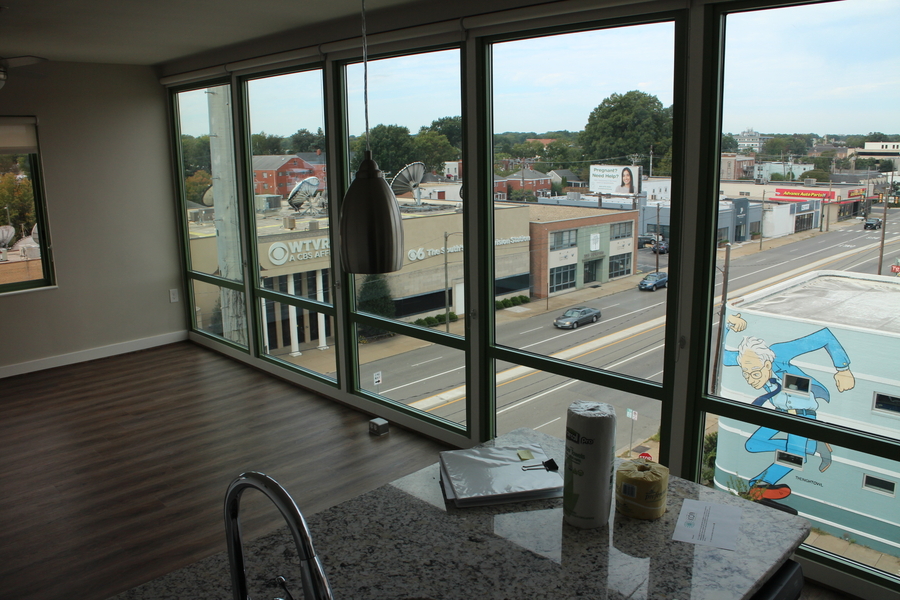 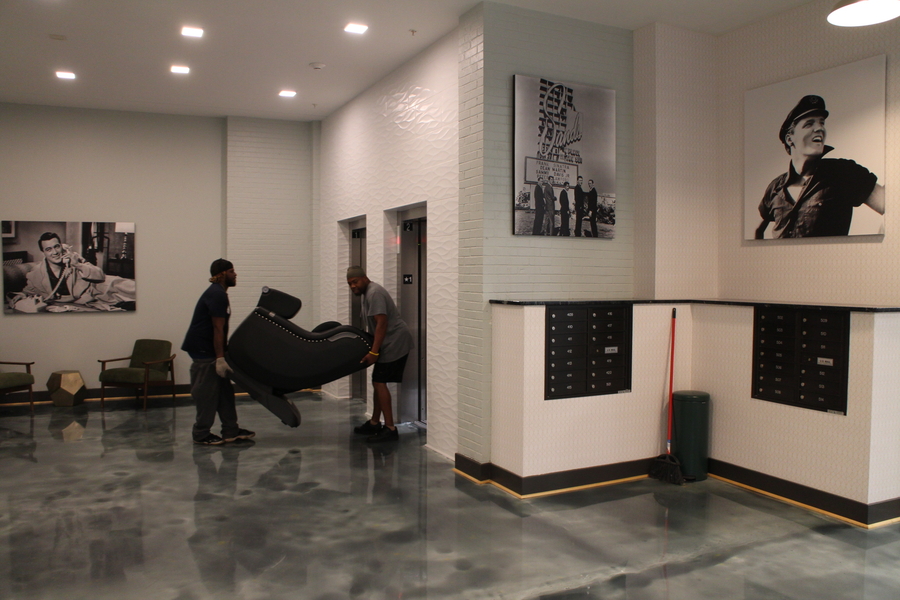 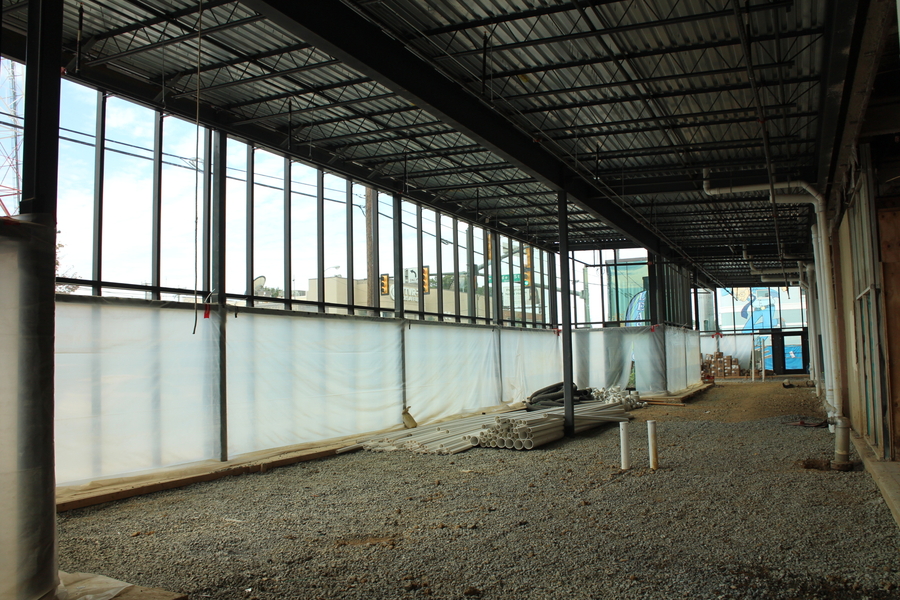 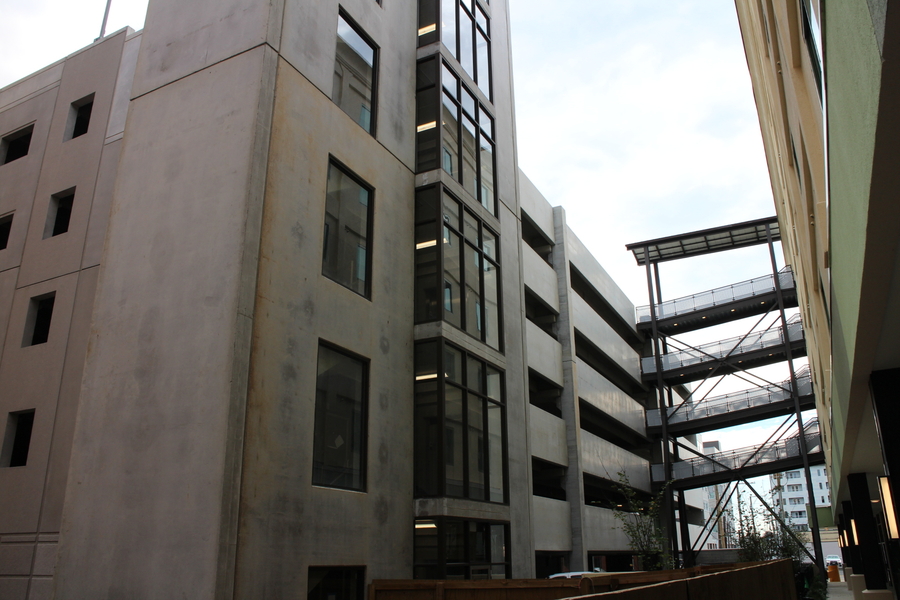 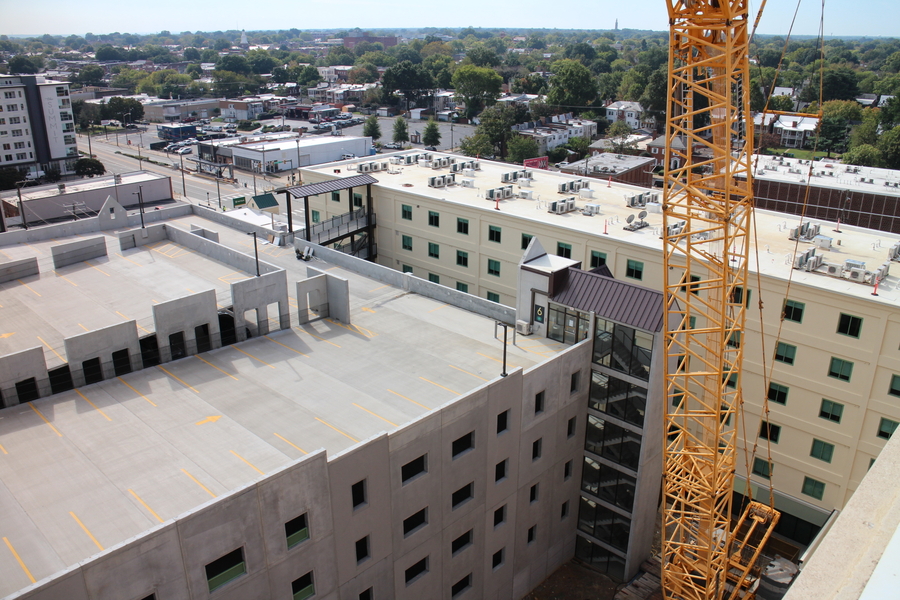 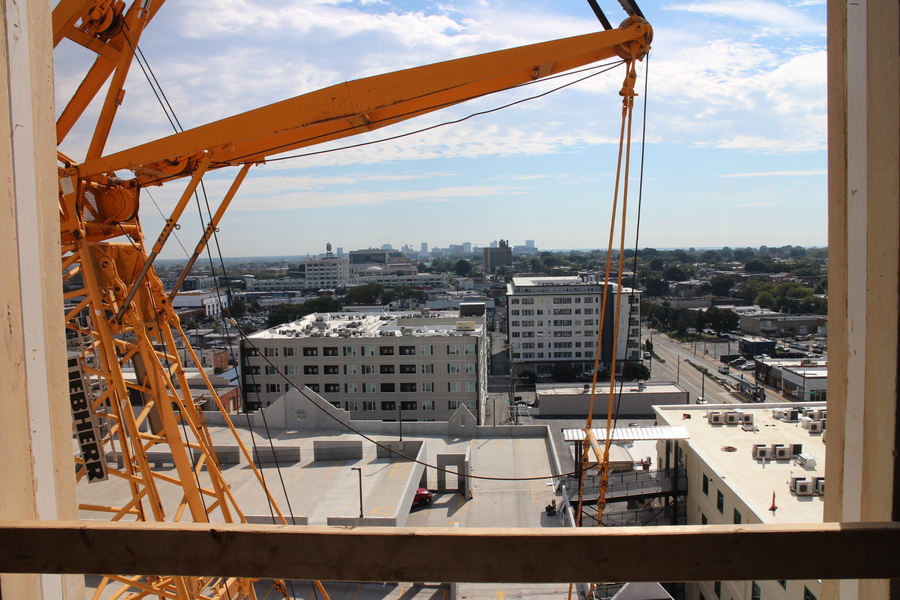 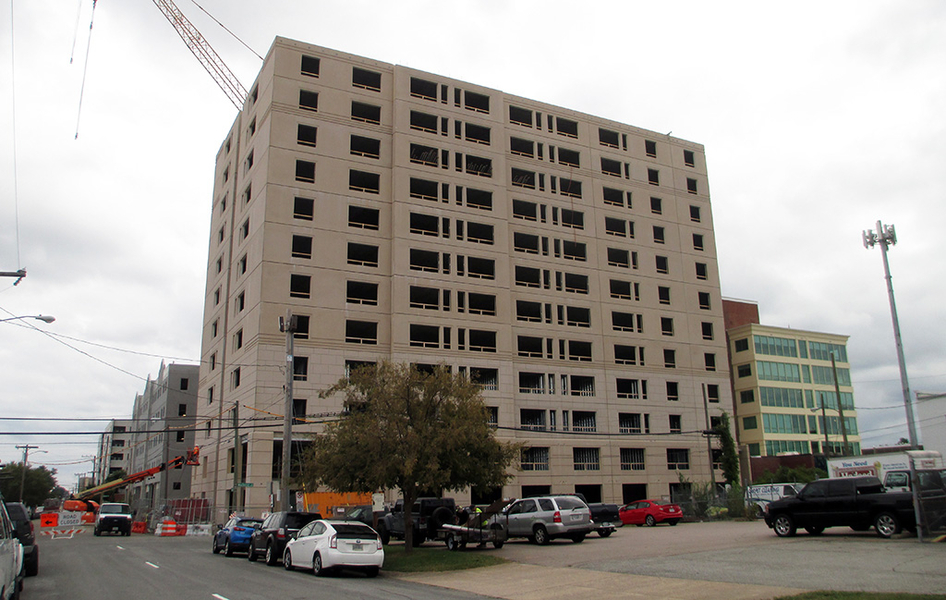 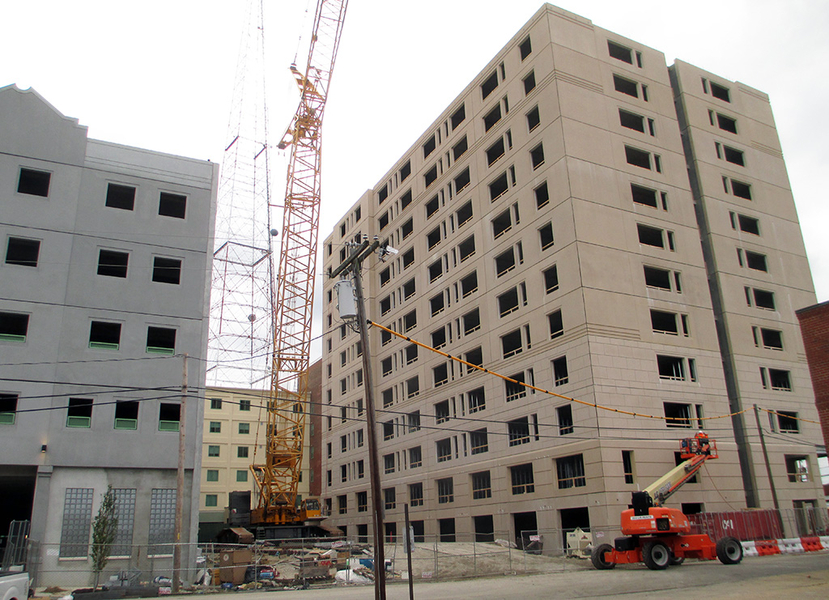 The redevelopment of a former hotel property in Scott’s Addition is taking the fast-developing neighborhood to new heights. 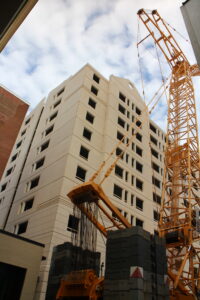 The 12-story tower under construction as part of The Icon development in Scott’s Addition. (Jonathan Spiers photos)

The $62 million project from veteran Richmond developers Louis Salomonsky and David White is not only repurposing the former Quality Inn & Suites building at 3200 W. Broad St., but also adding a new six-story parking garage behind it and a new-construction apartment tower that, at 12 stories in height, is set to be the tallest building in Scott’s Addition.

Called The Icon, the roughly 300-unit complex is the latest in the neighborhood from Salomonsky and White, whose Historic Housing firm also developed the nearby Scott’s View, a two-building complex totaling 350 units along West Clay Street beside Interstate 195.

Originally envisioned as 10 stories high, Scott’s View was in line to be the tallest buildings in Scott’s Addition when they were proposed in 2016, but was ultimately scaled back to eight and seven stories. With The Icon, the developers are achieving the designation, with 12 stories the maximum height allowed under the property’s TOD-1 zoning, which the city applied along the corridor in 2017.

“We didn’t have any objection, here, whatsoever to what we were trying to do,” White said in a recent interview. “I am of the opinion that the city needs more tax dollars, and we’re trying to make it more taxable per acre.” 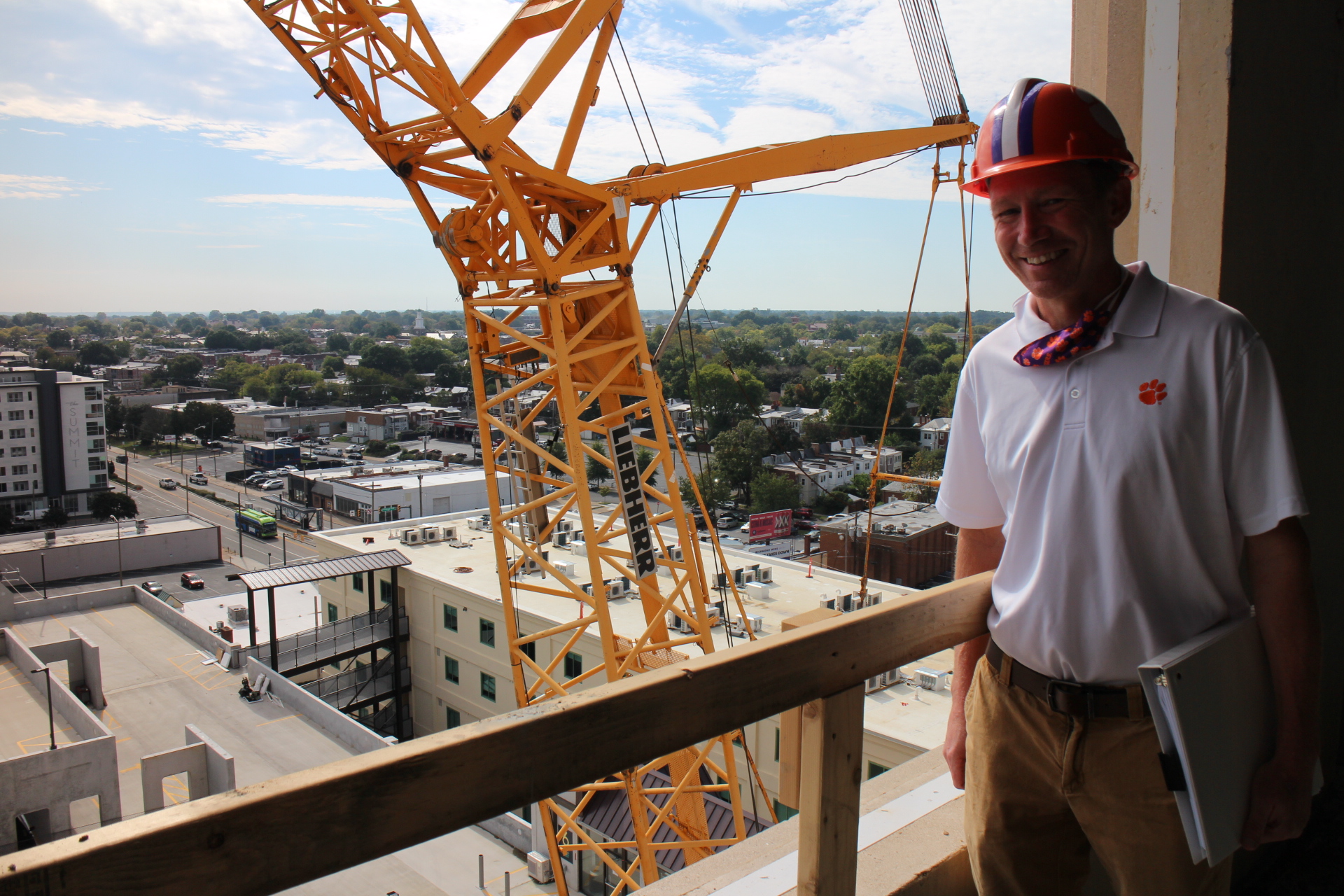 Historic Housing’s Brian White on the top floor of the tower building.

The tower is planned for 201 units averaging 694 square feet in size, with an eight-to-one ratio of one-bedroom apartments to two-bedroom floorplans. Monthly rents will be based at $2.20 per square foot, White said, with the upper floors likely going for more.

“The views up there are going to be really killer, so for the top three floors, we’re going to step it up a little bit. We’re going to do really high-end finishes there, to not just have the views be special but have the entire apartments be special on those,” he said. “You can see to Willow Lawn or to downtown from up there.”

White said completion of the tower and entire project is targeted for next spring, while conversion of the five-story hotel building is currently wrapping up. White said two-thirds of the 100 apartments in that building are already leased. 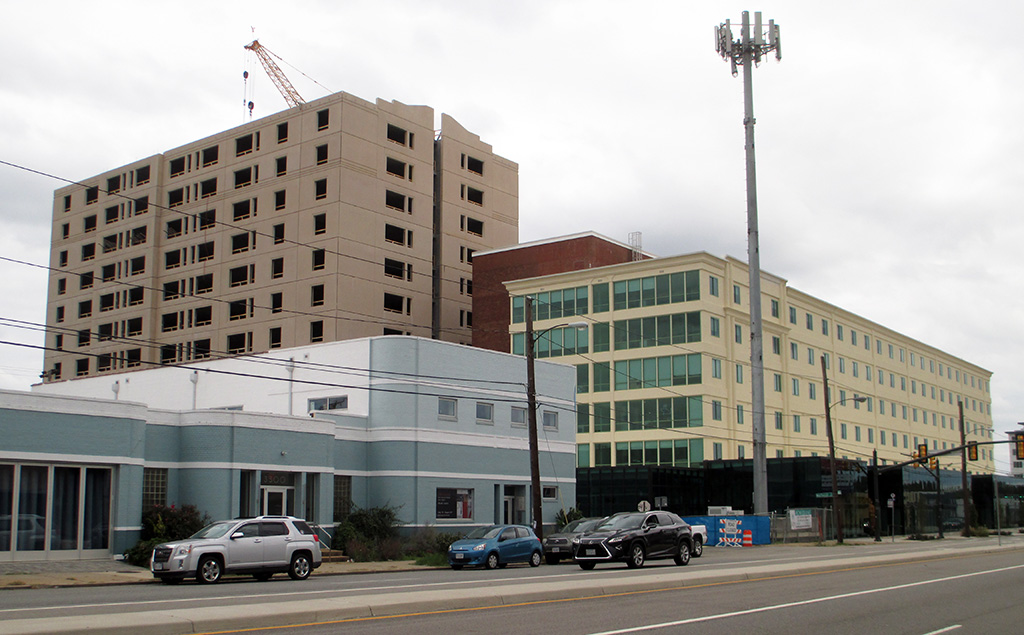 A temporary cell tower was constructed on the site for the duration of construction, replacing antennas that had to be removed from the shorter hotel building.

Average rents in that building are nearly $1,600 a month for one- and two-bedroom units averaging 716 square feet, with rent including utilities, cable TV and internet. The building’s end units feature floor-to-ceiling glass walls, maximizing views.

The six-story parking garage will total about 550 spaces and includes an unusual feature: pedestrian bridges from each level, providing residents with more direct access to their respective apartment floors. 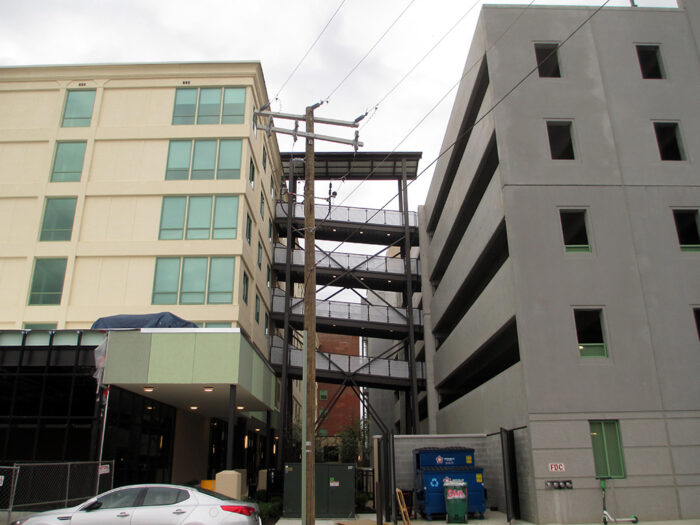 The pedestrian bridges connecting the parking garage to the converted hotel building.

“We’d like to make some of those spaces available to rent to the public, just given how tight parking is getting in that area,” he said.

The complex also is planned to include 24,000 square feet of commercial space, most of it housed in an atrium-like structure fronting Broad Street off the smaller building. White said it remains to be seen whether all of that space will be set aside for commercial use.

“We rented well at Scott’s View in the commercial space and we’re getting a lot of interest here, but given the state of the commercial market, we’re trying to be flexible with whether we will finish all of that 24,000 feet as commercial, or maybe transition some of it to residential,” he said. “We’re going to finish up everything else while we’re making that decision.” 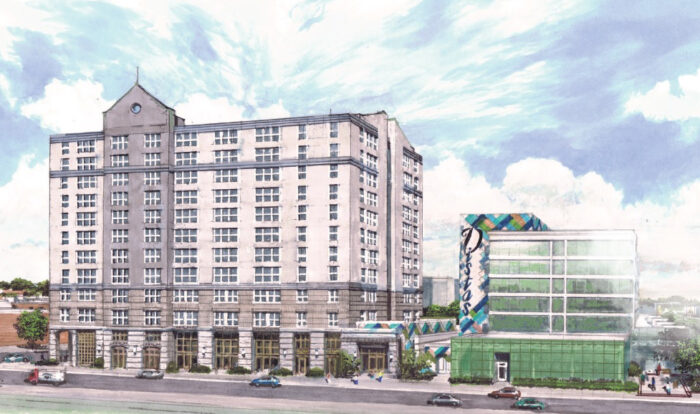 An eastward view of how the tower and converted hotel building will appear along MacTavish Avenue when finished.

Planned amenities include a pool between the three structures, as well as a gym and a game room with a fireplace and bar.

White said “The Icon” name refers to the former hotel’s mid-century beginnings, with the apartments’ floorplans named for various celebrities of the 1950s, such as “The Hudson” for Rock Hudson and “The Monroe” for Marilyn Monroe.

Historic Housing purchased the 3.5-acre property for $8 million in 2018 from Better Housing Coalition, which had planned a $42 million mixed-use development there but withdrew that project after settling a legal dispute with another developer.