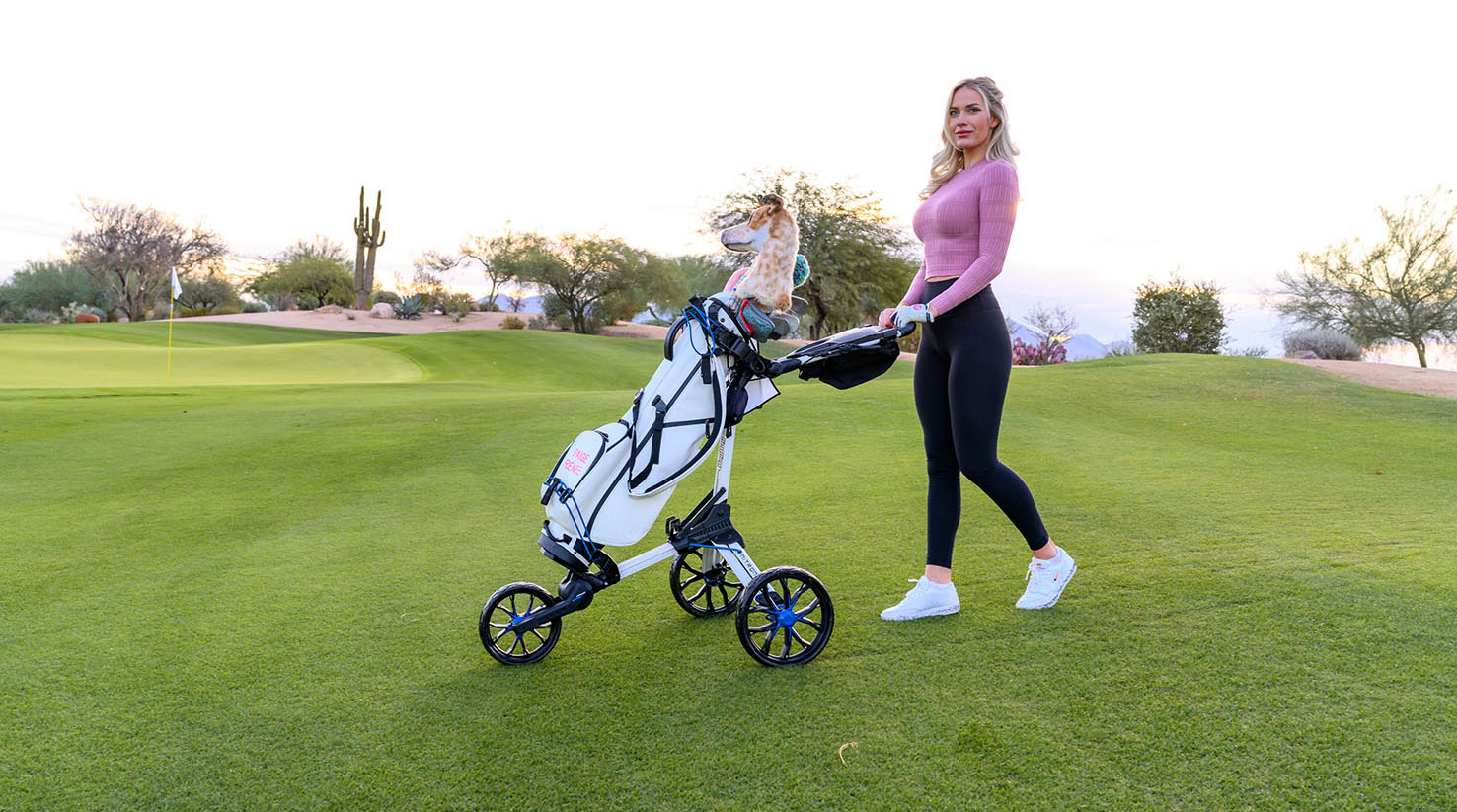 Leighton Klevana admits that his Richmond-based company, Dynamic Brands, has always flown a bit below the radar in how it promotes itself, particularly in its hometown.

Now, in a bid to come further out of its shell, the golf gear maker has teamed with golfer-turned-social media celebrity Paige Spiranac as it ups its online profile. And it’s looking to take advantage of its chance for some extra exposure locally.

Klevana said the company brought Spiranac to Richmond this week to play alongside it at the pro-am at the Dominion Energy Charity Classic. The annual PGA Tour Champions tournament runs through Sunday at Country Club of Virginia’s James River Course.

Klevana said it’s a chance to show the local community a bit more about Dynamic Brands’ reach, which includes well-known brands of pushcarts, golf towels, umbrellas, ball retrievers and other products. Its towels, for example, are customized and sold to the Ryder Cup, PGA Championship and U.S. Open., as well as clubs like CCV and Kinloch.

“We really fly under the radar in Richmond and that’s probably my fault in that we don’t like talking about ourselves,” said Klevana. “We have distribution not only in the U.S. and Canada, but in 40 countries around the world.”

Its relationship with Spiranac has the potential to take the reach to new places -— she’s been crowned in recent news reports as the most followed golfer on Instagram, outpacing the likes of Tiger Woods. She has more than 8 million followers across the big social media platforms.

Klevana said aligning with Spiranac is a first step for the company in stepping outside its more traditional marketing efforts. 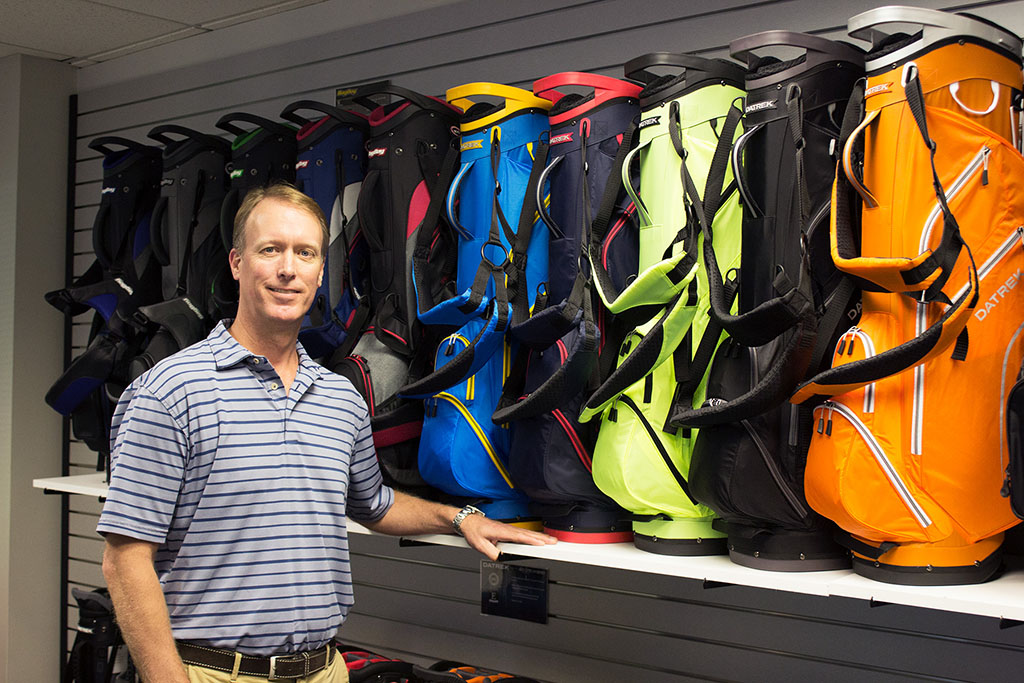 “She’s a social media guru,” Klevana said. “She knows her audience extremely well and can tell you what her followers like and what they don’t. We’re not social media experts and she’s teaching us that on the fly.”

Spiranac, 28, was a decorated college golfer who played briefly as a pro before parlaying that early success into fame on social media.

Her focus on golf and golf products in her postings has helped her build a niche representing various golf products. In addition to her work with Dynamic Brands, she has affiliations with head cover brand Swag Golf, golf simulator company X-Golf, and club fitting retailer Club Champion.

“I never intended to be Instagram famous,” Spiranac said by phone this week. “There’s been no blueprint or clear path. No one’s really done this before in the golf industry.”

Dynamic Brands was formed by Klevana and a business partner in 1997 as an independent spinout after the Bagboy brand had been owned by the Ben Hogan Co. and sold to Spalding.

The company’s relationship with Spiranac was born about a year ago when she was publicly dissing the use of pushcarts. One of Dynamic Brands’ biggest products is its Bagboy brand of pushcarts.

“She was down on pushcarts … she thought it was an old man’s product,” Klevana said. “That started some chatter (on social media). She kind of got pushed into trying it and that’s where we connected with her and it grew from there.” 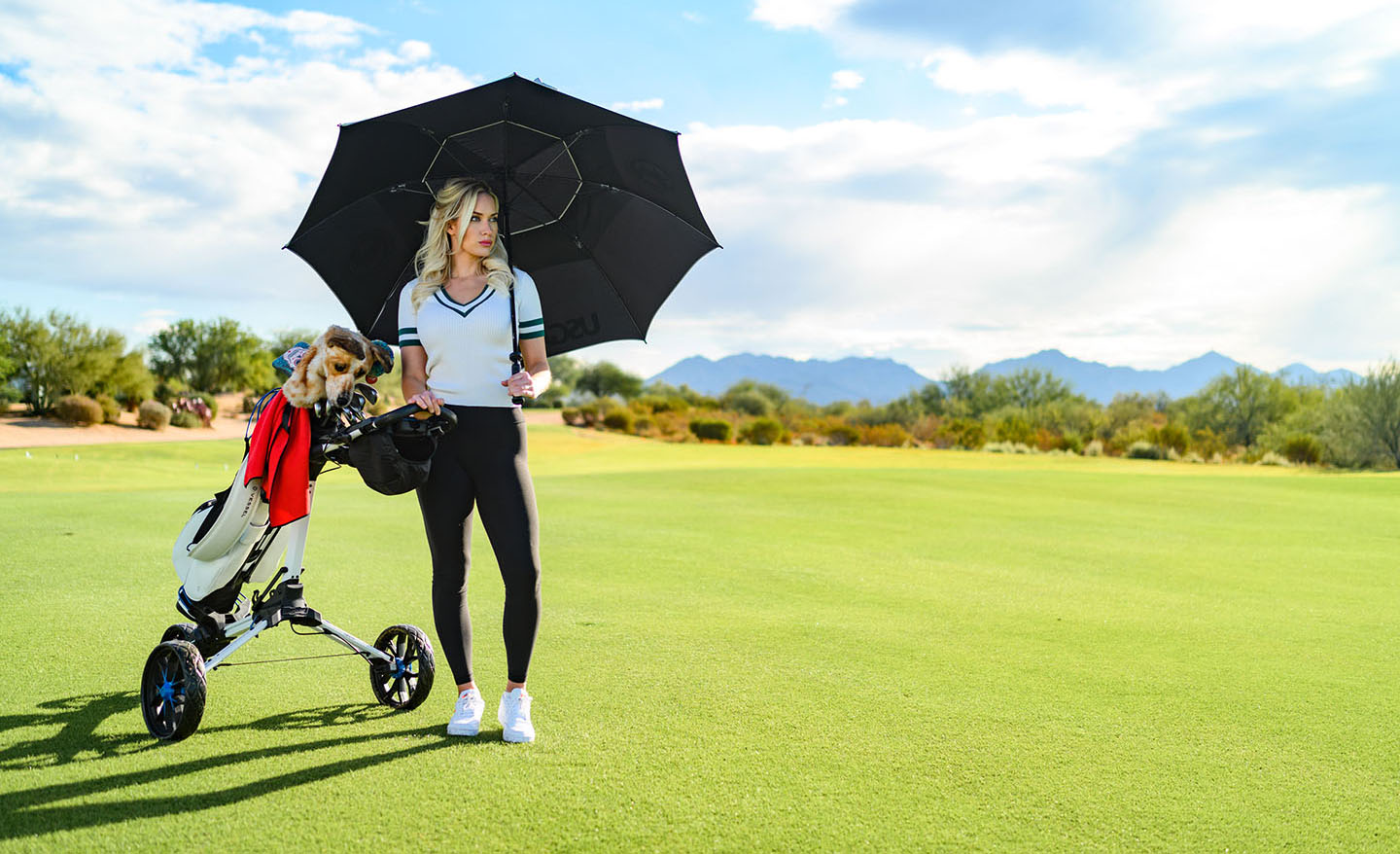 Besides pushing pushcarts, Dynamic Brands and Spiranac are jointly developing a line of golf towels. The latest is a Ryder Cup-themed towel featuring Spiranac in a provocative pose.

The fortuitous social media collision has since evolved beyond pushcarts into the two sides jointly developing a line of golf towels. The latest is a Ryder Cup-themed towel featuring Spiranac in a provocative pose.

Klevana said they’ve sold more than 10,000 of the towels since the promotion began over the last year. He said the deal with Spiranac is set up so that both the company and Spiranac benefit if the towels sell well, as opposed to the more traditional celebrity endorsement deal.

“It’s not ‘Hey, we’re going to pay you X and you’re going to go out and say how great we are,’” Klevana said.

The two sides next are working on a new golf club bag, the details of which they are keeping somewhat under wraps for now.

Spiranac said they will be eye-catching.

“I think people will be shocked by the technology and innovation we’ve put into a golf bag,” she said.

While in town for the DECC, Spiranac said she also had a chance to play at Kinloch, in addition to her two pro-am rounds at CCV.

She and the Dynamic Brands teams were paired with Canadian golfer Mike Weir, known best for his Master’s win in 2003.

Spiranac said she didn’t hit a hole in one with Weir, as she did in recent weeks while playing a round with legend Gary Player.

“There were good holes and bad holes,” at CCV, she said with a chuckle.

She has more than 8 million followers across the big social media platforms.

I mean, when every post is a picture of her cleavage and rear end…

How dare you! They obviously chose her for her golf skills and not her looks. She clearly had a strong point of view regarding push carts that changed with the first check, so not just another pretty face and super, smoking hot body.

Remember Jan Stephenson? A bunch of LPGA Tour wins, and then she came out with a calendar. People lost their minds. In her view, people spent millions on posters of Farrah Fawcett, so why not a professional athlete? “We’re athletes, and we’re women. Let’s market that.” Paige offers golf tips and endorsements and gets paid. Good for her.

Thanks for mentioning X-Golf, Michael! For those interested, come check out our 6,000 square foot facility in Midlothian with our state of the art simulators, full bar, and over 45 courses to play! http://www.xgolfrichmond.com

Nice work, Dynamic Brands Team! Look forward to hearing how the partnership proves out. It sounds like a great case study to share with the Richmond chapter of the American Marketing Association 🙂