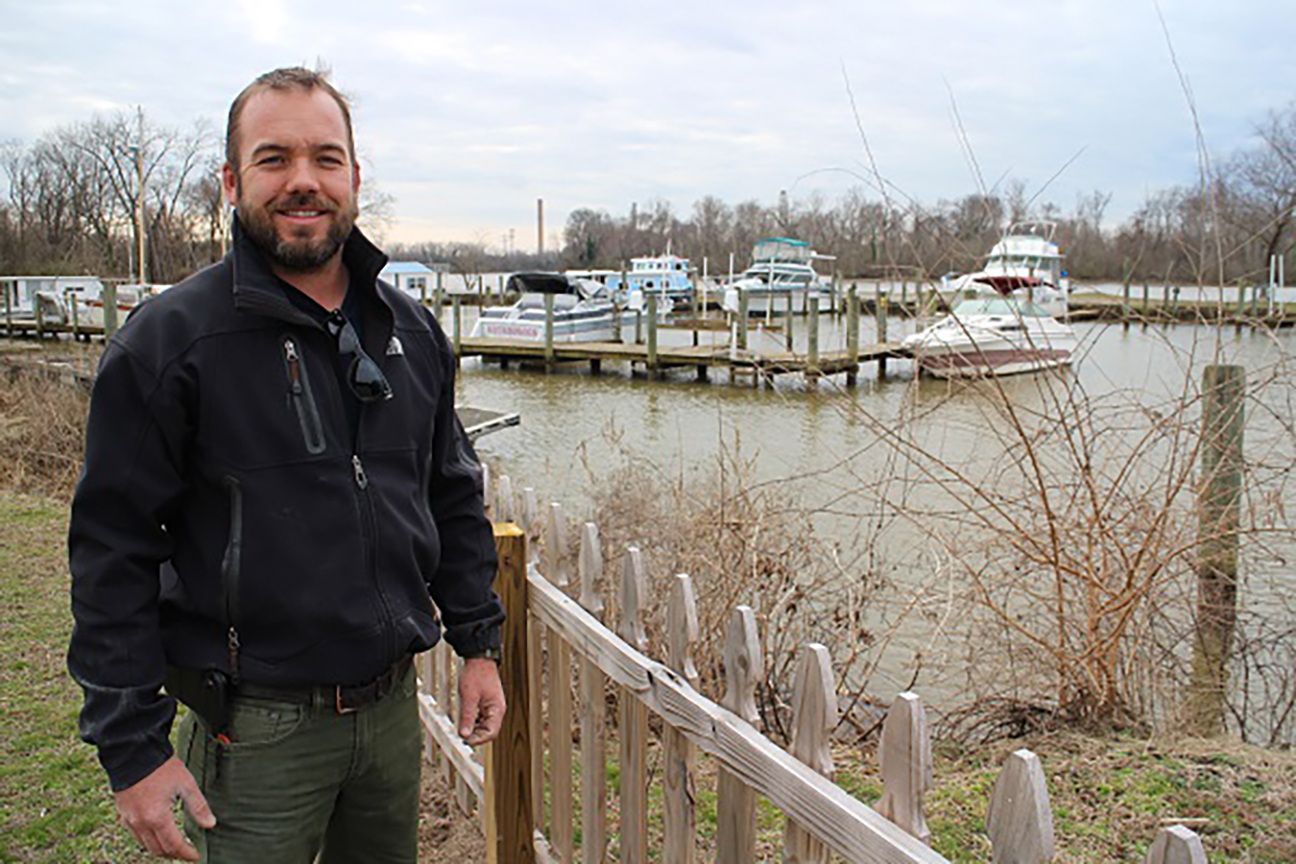 Max Walraven, pictured in 2019, is the owner of Kingsland Marina. (BizSense file photo)

As its centerpiece restaurant attracts big crowds — including some A-list celebrities in town shooting movies — the new and improved Kingsland Marina in Varina is enjoying busy but calmer waters after settling a legal dispute that had been lingering over it for years.

Max Walraven, who has led an overhaul of the 13-acre marina since purchasing a majority stake in it three years ago, said he’s preparing to launch a boat rental and charter business that would build on the momentum of his onsite dockside restaurant The Lilly Pad.

The 38-year-old recently bought a 60-foot sportfishing yacht that he’s renting out at the marina for charters and couple’s cruises. And next spring, he’s planning to start offering pontoon and pleasure boats for rent.

Nearing the close of the first full year in business at The Lilly Pad, which he owns with his wife Karen, Walraven said, “Restaurant-wise, we just absolutely killed it this summer. It’s exceeded all my expectations.”

“It was awesome to see something that was an idea years ago come (to be),” he said. “We continue to grow and mature, even from a culinary perspective.” 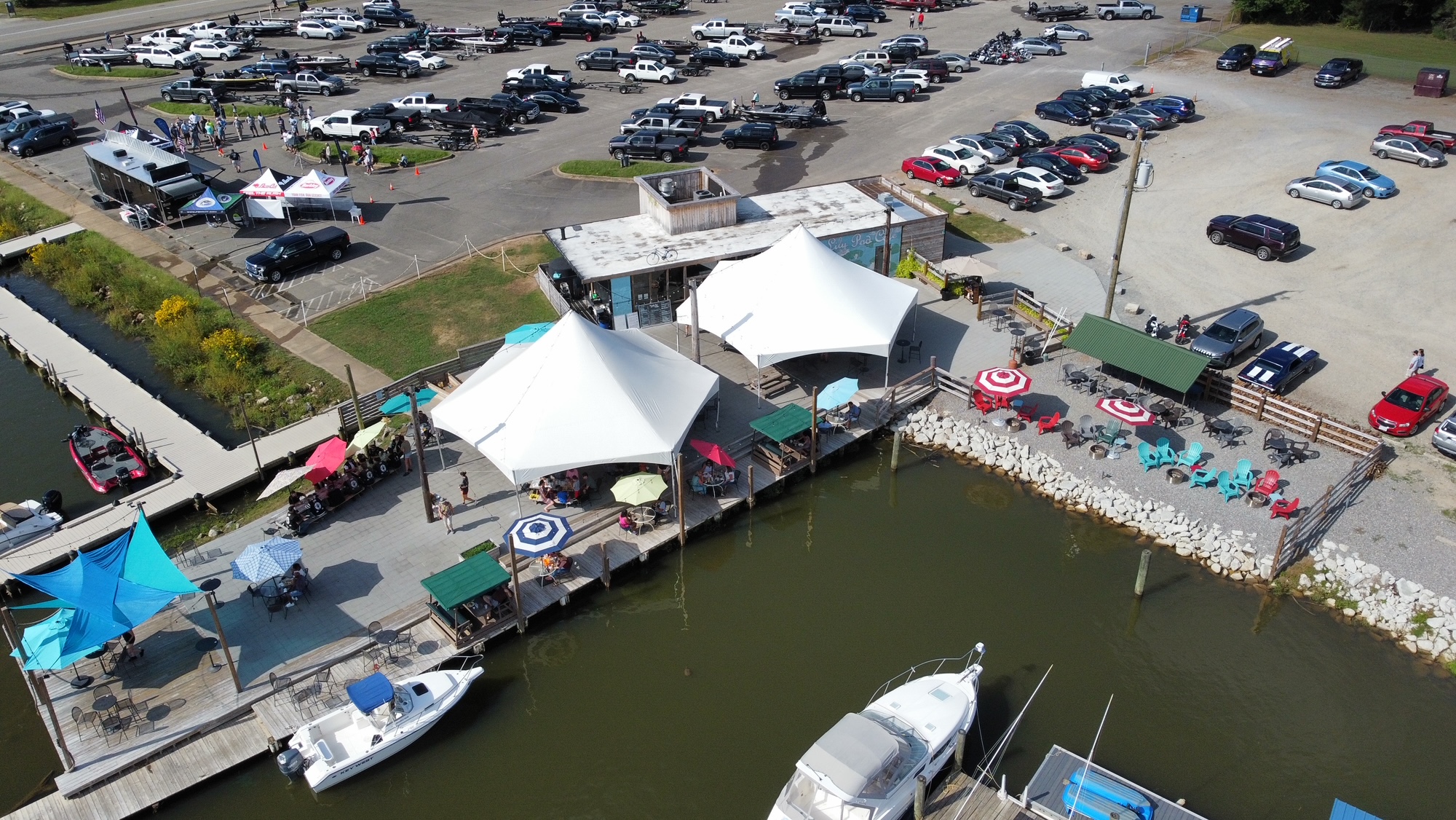 After putting $250,000 into renovating the restaurant last year, Walraven said, The Lilly Pad has served 50,000 people and brought in $2 million in business so far this year, maintaining a profit margin of about 10-15 percent and employing 52 people.

“It’s pretty awesome numbers considering we’re this little place out 15 minutes from downtown,” he said. “We’re not in the city, so that tells you that people are wanting a destination. They’re wanting to take the drive and come for the experience.”

Among the crowds were the likes of actors Michael Keaton, Ewan McGregor and Mary Elizabeth Winstead, who dined at Lilly Pad while they’ve been filming in Richmond in recent months.

While in the works pre-pandemic, the restaurant has capitalized on the open-air dining that’s been in demand since the arrival of COVID-19.

The pandemic has also driven the boat-side of the business at both Kingsland and nearby Richmond Yacht Basin, which Walraven also owns and operates. 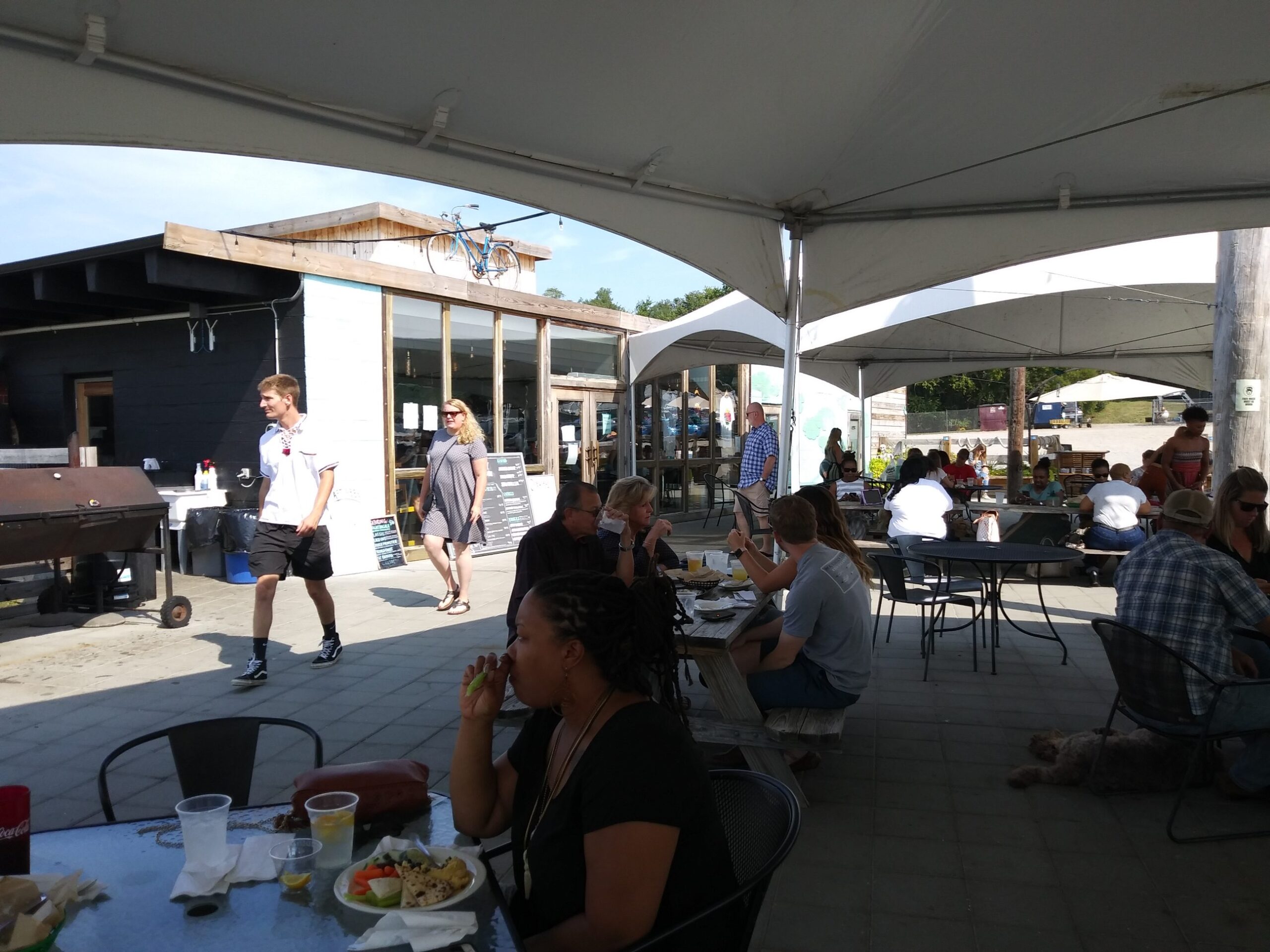 The restaurant was busy on a recent Sunday. (Jonathan Spiers photo)

The two marinas are located near the convergence of Osborne Turnpike and Kingsland Road, about five miles south of the city, and total about 100 boat slips between them. Kingsland also offers land storage for as many as 40 boats.

“We were slam-full, both marinas, all year long,” Walraven said. “More work than we knew what to do with. Even boat sales were up.

“Just like the used car market, there was no boat inventory because of COVID. So, people were charging more,” he said. “A lot of businesses were negatively affected by COVID, and we had the opposite effect.” 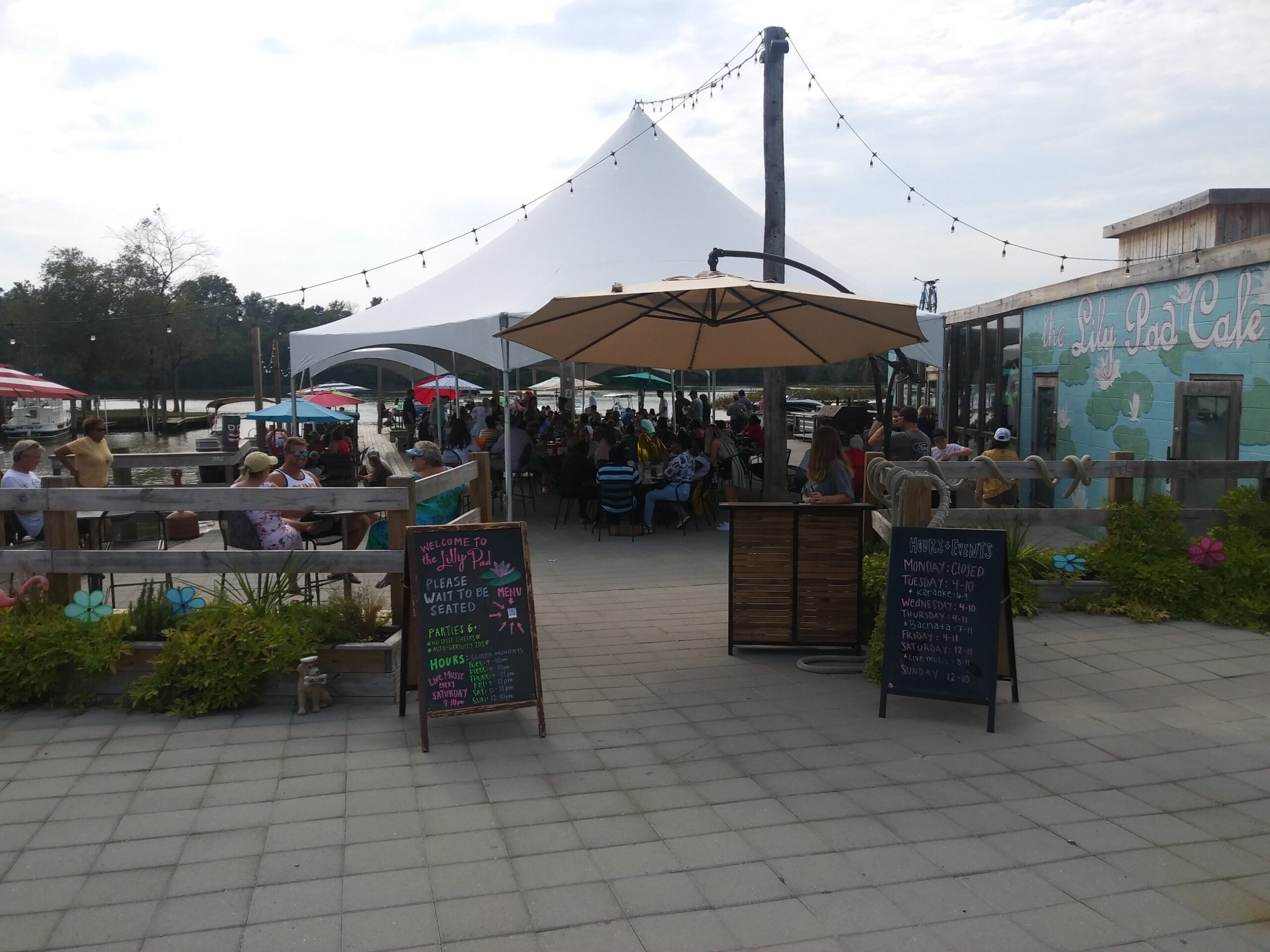 Crowds at The Lilly Pad have included movie stars such as Michael Keaton and Ewan McGregor. (Jonathan Spiers photo)

Walraven said inquiries for boat rentals also went up, spurring his decision to launch a watersports division between the two marinas that would involve boat rentals, wakeboarding lessons and charters.

“We’ve got a captive audience because of the restaurant,” he said. “If I have a QR code at a table that you scan and it says, ‘This is how you rent a boat,’ why not?”

Kicking off that side of the business is the Kryptonite, a 60-foot Ocean Yachts Sportfish vessel that he started renting out over the summer. Soon after he posted about it on social media, the boat was booked for months, Walraven said. 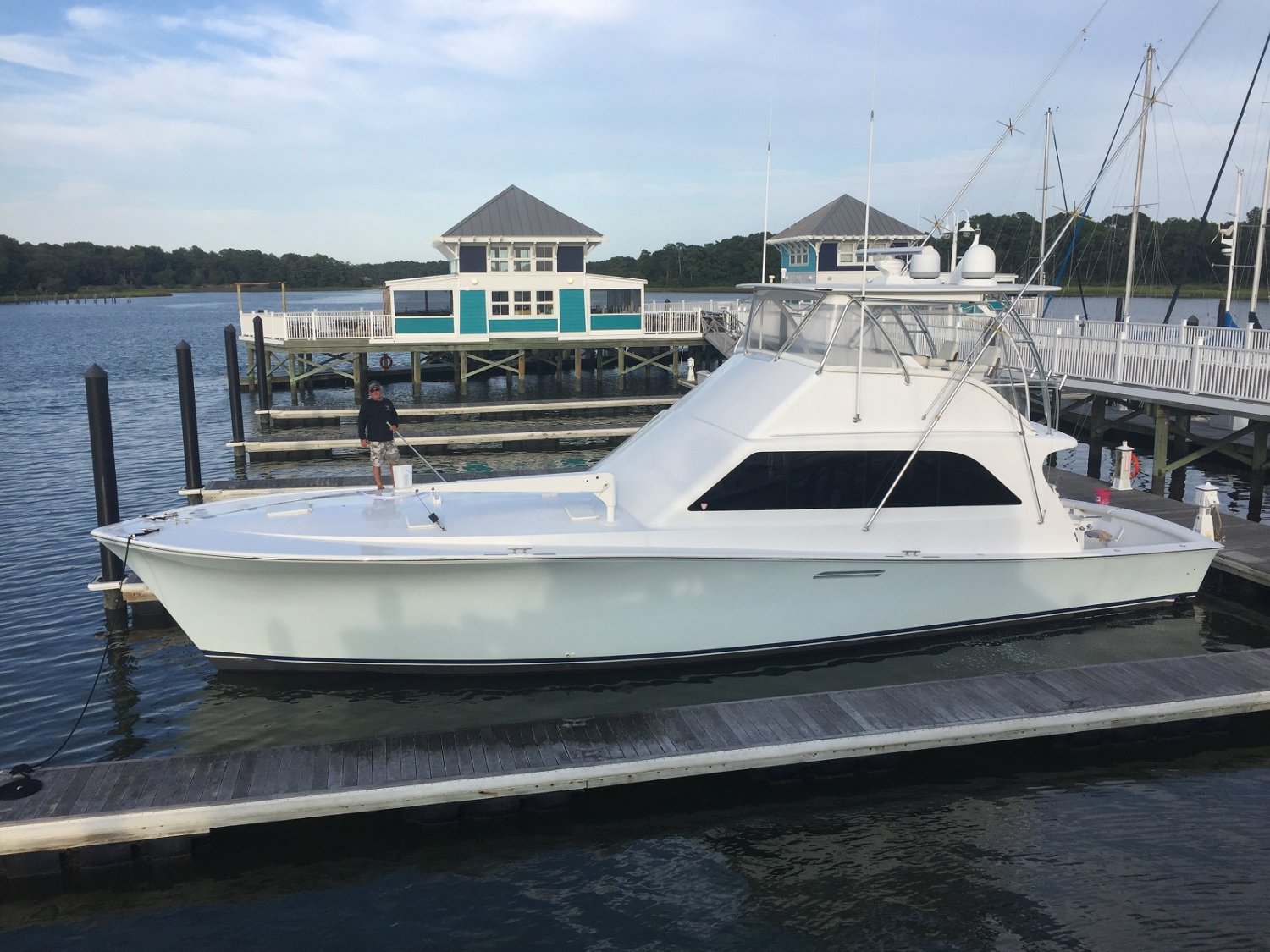 The 60-foot yacht that Kingsland Marina has been offering for charters.

“I did a couple posts about it and we booked up immediately, so there’s a serious demand for what I would consider higher-end charters in Richmond,” he said. “I think that people that do have disposable income are looking for fun, very exclusive things to do in Richmond.”

While currently undergoing maintenance, Kryptonite has been renting for $350 an hour with a two-hour minimum. In addition to charters, the three-bedroom, three-bathroom yacht has been offered for couple’s cruises, with a private dinner from The Lilly Pad served on the boat.

Overnight stays are also offered, with crews anchoring the boat in a cove along the river, leaving and returning the next morning to pilot it back.

“That got a huge response,” Walraven said. “We were already booked all the way into the fall.” 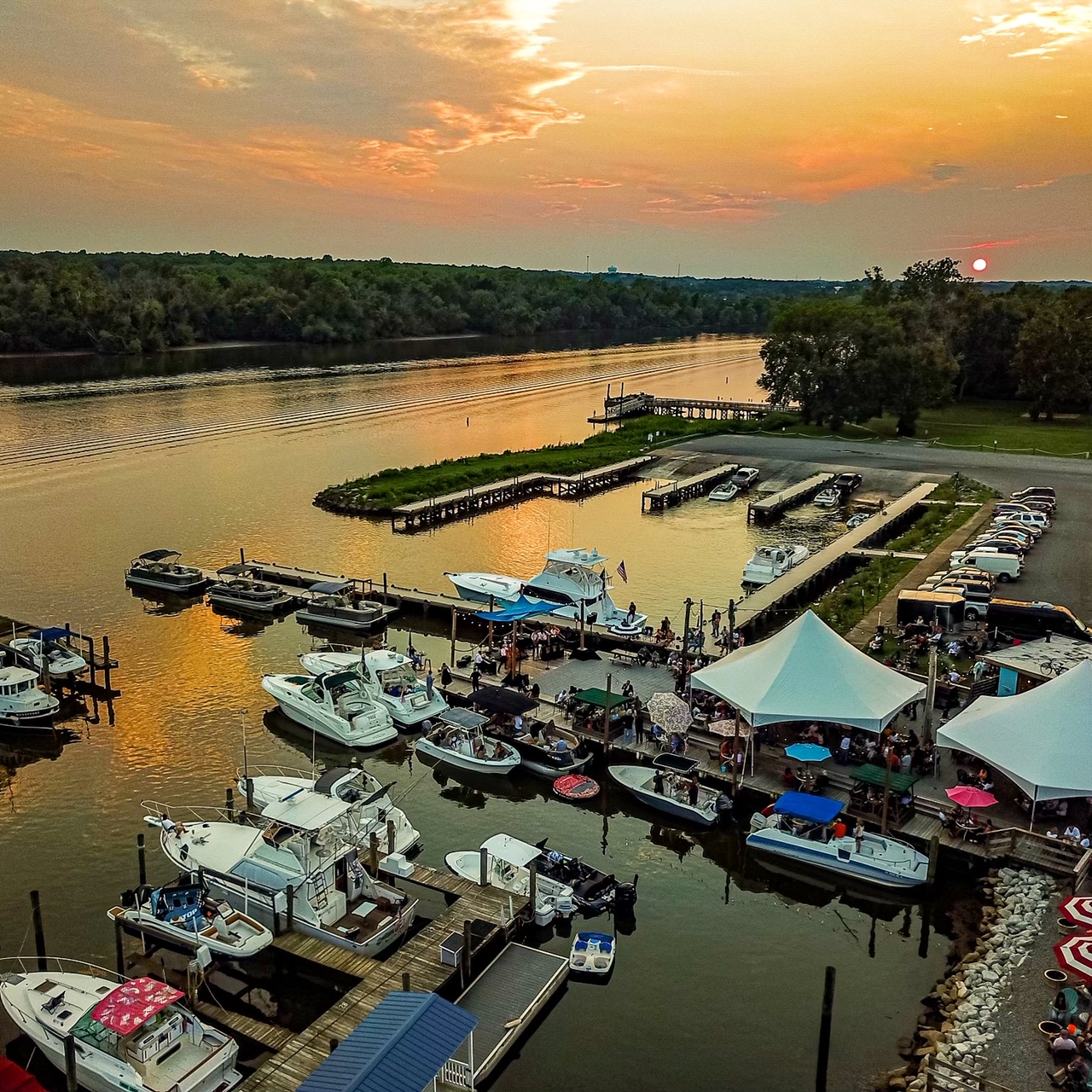 Sunset views along the river are a draw for the restaurant and marina.

The moves come months after a lawsuit between Walraven and Kingsland’s former caretakers was dismissed in Henrico County Circuit Court, after the parties agreed to a monetary settlement a few days into a jury trial.

The marina’s previous operators, Henry and Michaele Upshur, had alleged they were supposed to have first dibs on the property when Walraven purchased a majority stake in Kingsland in 2019. The suit had sought to extend a right of first refusal and award damages.

Walraven countered that the Upshurs had failed to maintain the property according to the terms of their lease and were, therefore, in default. His countersuit sought upward of $1 million in damages attributed to a lack of dredging and other property maintenance, among other claims.

Walraven said he could not discuss details of the settlement because it included a non-disclosure agreement between the parties. A call to Henry Upshur last week was not returned.

“What it came down to was, all of us were tired of fighting, clearly,” Walraven said. “Nothing like five or six days of depositions to really pound everybody to a pulp.”

With the lawsuit behind him, Walraven said he’s looking forward to what the future holds for Kingsland and The Lilly Pad. Come January, he said he’ll have full ownership of the marina, as he plans to buy out the 10 percent stake of minority owner Merritt Foster III.

“I had some exorbitant construction costs in the beginning, but it’s a good living,” Walraven said. “The restaurant business, the struggle is so real. But it’s rewarding. At the end of the day, you’re selling smiles. They’re buying good food from you and watching sunsets and hanging out on the river, so it is fulfilling.”

This is such wonderful news for Max and Karen and their family. They’re truly committed to providing a wonderful experience for all those wanting to come and enjoy the river, the food, the music, and the atmosphere! The place always feels so welcoming and safe! Everyone always asks who are they, and we say, they own this river! They’re young, creative, and they truly care about the river as well.

We’ve been coming down to Osborne for years, and we’ve watched the place transform under their care and ownership! They have turned the place around!!