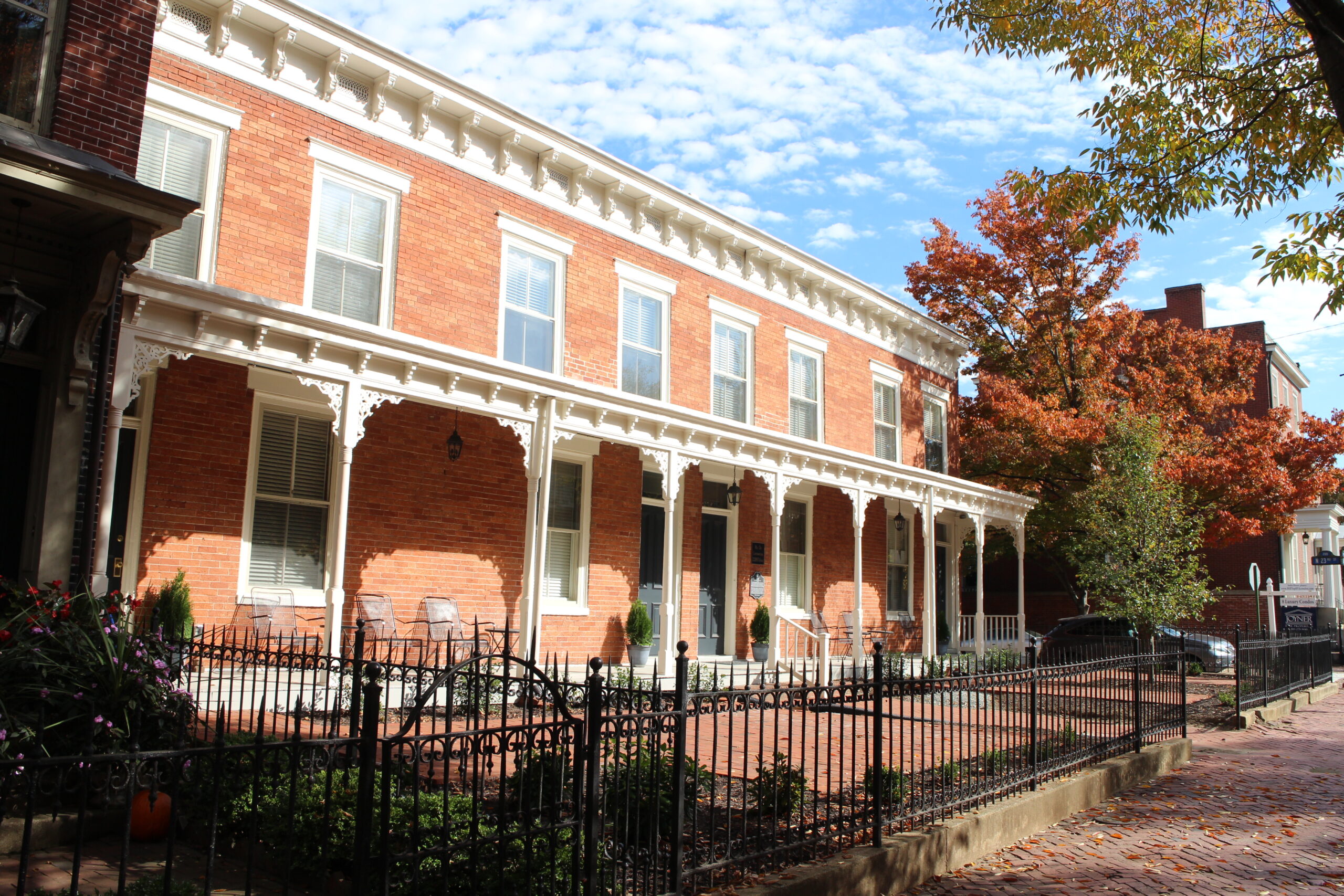 The building at 2218 E. Grace St., once home to Church Hill’s 2300 Club, has been converted into eight condos. (Photos by Jonathan Spiers)

Nearing the end of a three-year conversion, the site of many a wedding reception and other gatherings in Church Hill is making a full return to its residential roots.

The former home of the now-defunct 2300 Club at 23rd and Grace streets is nearing the end of a three-year conversion that’s turned the 1870s-era Italianate building into eight condominiums.

Called Hill Top Condominiums, the nearly finished units were listed for sale last month by Betsy Dotterer with Joyner Fine Properties. Prices range from $319,000 to $435,000 for six of the units, which range in size from 615 to 981 square feet and each have a unique floorplan. The two remaining units have yet to be listed. 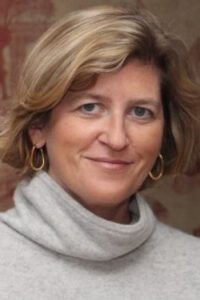 Dotterer is selling the homes for property owner Catherine Branch, who with her sister inherited the building in 2013. Their late father owned the building when the lower floor was home to the 2300 Club, a preservation-focused dining and social club that took up residence there from the early 1970s until it closed in 2017.

Dating back to 1964 and at one point totaling more than 400 members, the club was originally based at 2300 E. Broad St., now home to Patrick Henry’s Pub & Grille at the Inn at Patrick Henry’s.

When it moved a block south to 2218 E. Grace St., the club hosted numerous wedding receptions, dinners and other events for its members, said David Branch, Catherine’s husband, who’s been heading up the renovation. The couple managed the club in its final years and added signage to the property acknowledging its past.

“We think the history of the 2300 Club being here is important,” Branch said. “A lot of people had their wedding receptions here.”

After refurbishing four apartments that were above the club space in 2014, the Branches set out to convert the downstairs space into four more apartments before deciding to convert them to for-sale condos. Work on the lower level started in late 2018 and is nearly complete, with the units unfinished to allow buyers the chance to pick their own finishes. 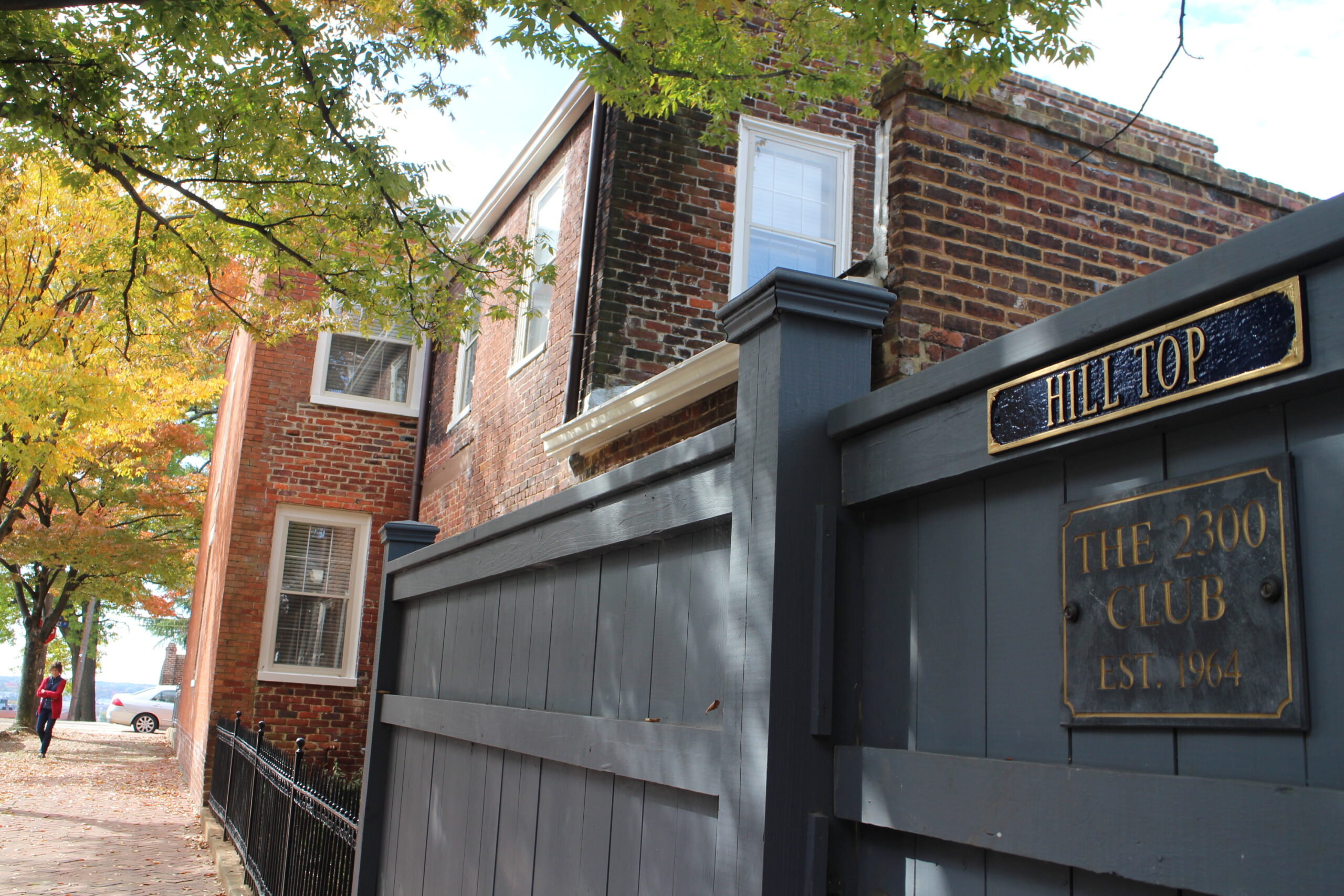 The property’s owners have added signage acknowledging its past as the social club’s final home.

While the Hill Top condos are not quite finished, he said they can be within 30 to 90 days of a sale — depending on the unit and buyers’ customizations.

No stranger to such work, Branch developed the Mooreland Landing subdivision in western Henrico County and built homes there including 8905 Brennan Road.

The one- and two-bedroom Hill Top units each include a full bathroom and half-bath, a gas fireplace, and appliances including a refrigerator and ventless washer and dryer. Heart pine floors and 10-foot ceilings accentuate the rooms, and shared walls and floors separating the units have been sound-dampened with a noise-proofing compound filled between added layers of sheetrock.

The property includes eight off-street parking spaces – one per unit – and an enclosed rear courtyard for residents is being enhanced with a 20-by-16-foot gazebo with firepit tables, as well as a gas grill and storage sheds that can fit bicycles.

New brickwork is being added for the courtyard and front entrance, and the front porch was improved with replacement posts that Branch said were turned by a local carpenter. 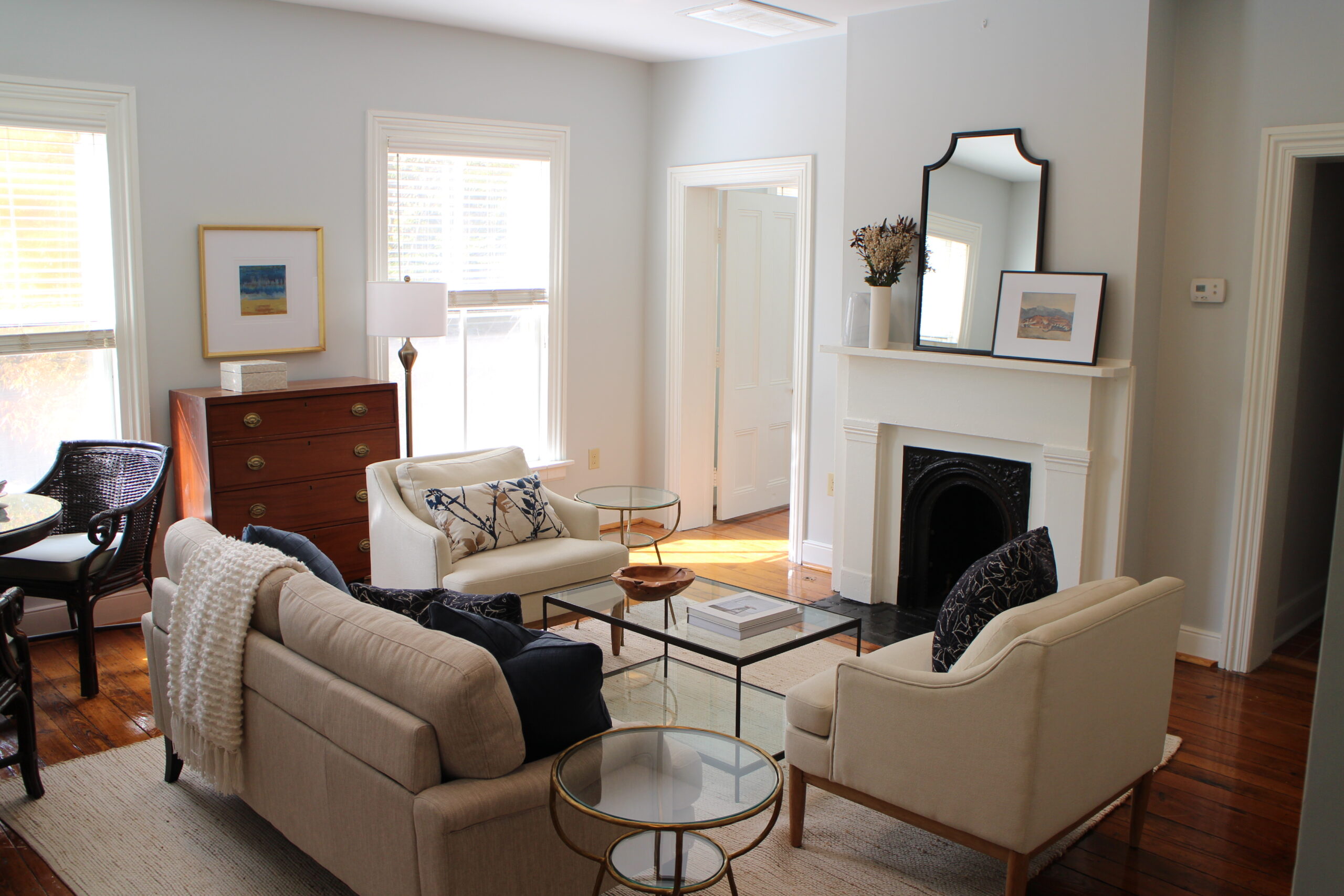 One of the upstairs condos was previously a furnished apartment.

“There’s still a little bit of construction going on. It’s in its final stages right now,” he said. “The units upstairs are for the most part finished, because they were occupied as apartments from after the renovation all the way through to this year. The last tenant moved out in July.”

Branch said the sound-dampening and related work cost over $10,000. He declined to say how much they’ve put into the renovation overall.

“Always more than you think before you started, I’ll tell you that,” he said with a laugh.

Since listing the units in mid-October, Dotterer said she’s received some interest in the condos but no offers as of yet.

Listed as a contributing structure to the St. John’s Church Historic District on the Virginia Landmarks Register and the National Register of Historic Places, the two-story brick structure was built in the 1870s as four row-style townhomes, which were renovated and combined by preservationist Douglas Fleet when the 2300 Club moved there in 1972. 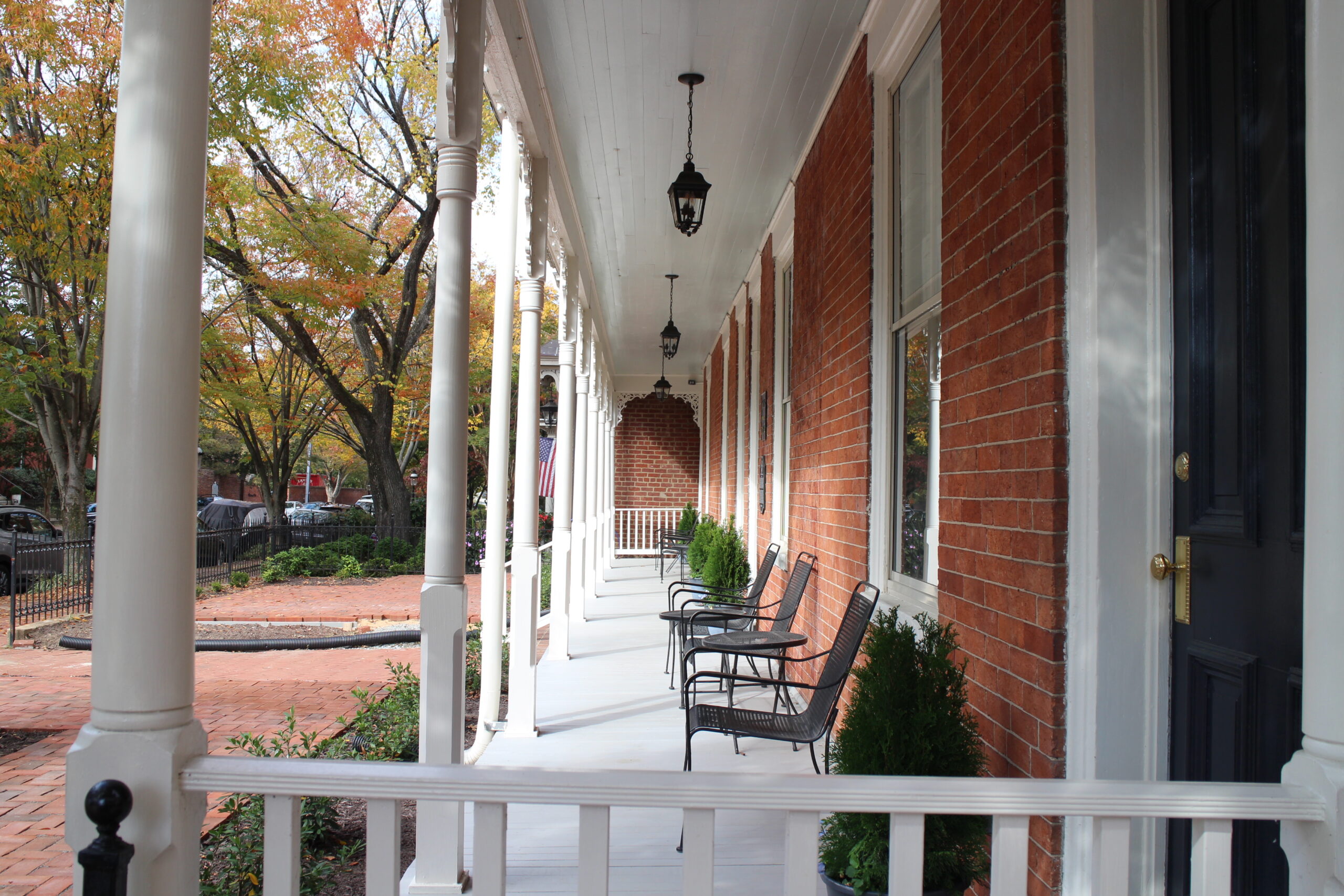 Posts on the front porch were replaced with new ones turned by a local carpenter.

Branch said he helped Catherine keep the club going after she inherited the property, but dwindling membership led to it following the fate of similar clubs, like downtown’s Bull & Bear, that were formed when prohibition laws restricted pre-dinner drinks in restaurants. He said they tried to increase membership, reaching 60 members at one point, but recognized the concept was past its prime.

“The whole business model of paying dues to a private club for a private dinner was unsustainable and outdated,” he said.

Now, with the condos requiring a homeowners’ association, membership dues will again be paid at the property, in the form of $275 monthly association fees.

With the bulk of the units one-bedroom condos, Branch acknowledged they can be a tough sell. But he said the condos carry added value in that none of them feature hallways or other less-utilized space. He also pointed to the courtyard as a site-specific amenity that adds to the condos’ livability.

“When you look at value compared to other places, on a per-square-foot basis, we’re high,” Branch said.

Standing in the courtyard, he added, “What gives this property value is this out here. There’s nothing like it in Church Hill, and really not in the city.”

I wish them the best with the conversion and sale of the condos, because I have fond memories of a few events at 2300 club. It had good karma. Paying as much as $518 per square foot for the smallest condo seems very steep given the market/comparables. You don’t see that kind of pricing anywhere in the metro area for a condo as far as I’m aware.

Hi Justin,
I invite you to visit Hill Top and you will see the value! Each unit has a unique floor plan with 10’ ceilings, working gas fireplaces with original mantles and the opportunity to choose your finishes in the kitchen and baths. The private rear courtyard is partially covered with 2 gas fire tables & gas grill, so you get to enjoy out door living in the heart of Church Hill. Off-street parking, too!

Agreed. I’m familiar with the property and have seen the current offering. I’ll be amazed to see any of these units sell at the current offering price. They are, at least, $100K overpriced per unit based on similar properties. The location, by all means, is outstanding but that can’t account for the ask based on that alone.

Kay, We obviously disagree on the valuations of these units. Something to think about. In the past, appraisers and Realtors used a value for the land and then added a value for the improvements for a total value. Tax assessments are still calculated this way. With the advent of Zillow and other such sites, people are getting lazy and simply dividing the price by the sq. footage to come up with a price per sq. ft. This simplistic method ignores the fact that not all land is equal. Nor are all improvements built with the same degree of workmanship, quality… Read more »