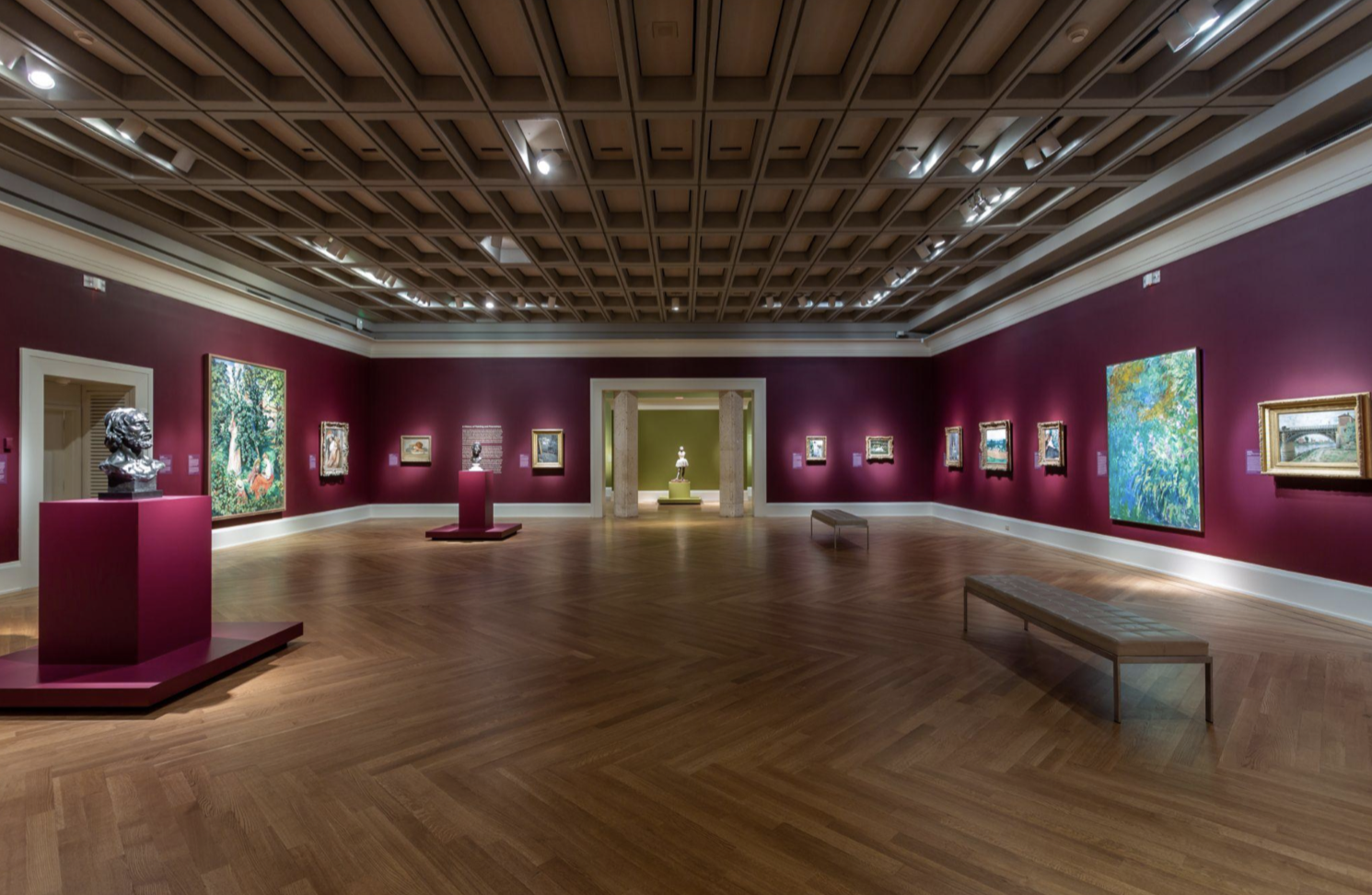 Claude Monet, Pierre Auguste Renoir and Edgar Degas are a few of the artists on display in the newly renovated Mellon galleries at the Virginia Museum of Fine Arts. (Photos courtesy of VMFA)

Two giants of photography, Ansel Adams and Man Ray, currently share the limelight at the Virginia Museum of Fine Arts.

While the handsome exhibitions of their work are temporary, in the permanent galleries Paul Mellon and Rachel “Bunny” Lambert Mellon, two famously generous Virginia collectors, are getting their extended moment. They, too, were essential to 20th century American culture.

Magnificent European pieces from the Mellon collections have been reinstalled as part of a newly completed renovation of 10 contiguous galleries on the second and third levels of the museum’s west wing.

Until last month the British equestrian art and French works of impressionism, post-impressionism and symbolism had been removed for four years to allow for structural and physical enhancements to better serve both the art and visitors.

Another goal of the makeover was to ensure that these galleries would eventually connect fluidly to residual spaces and a new VMFA west wing slated for completion in 2025. 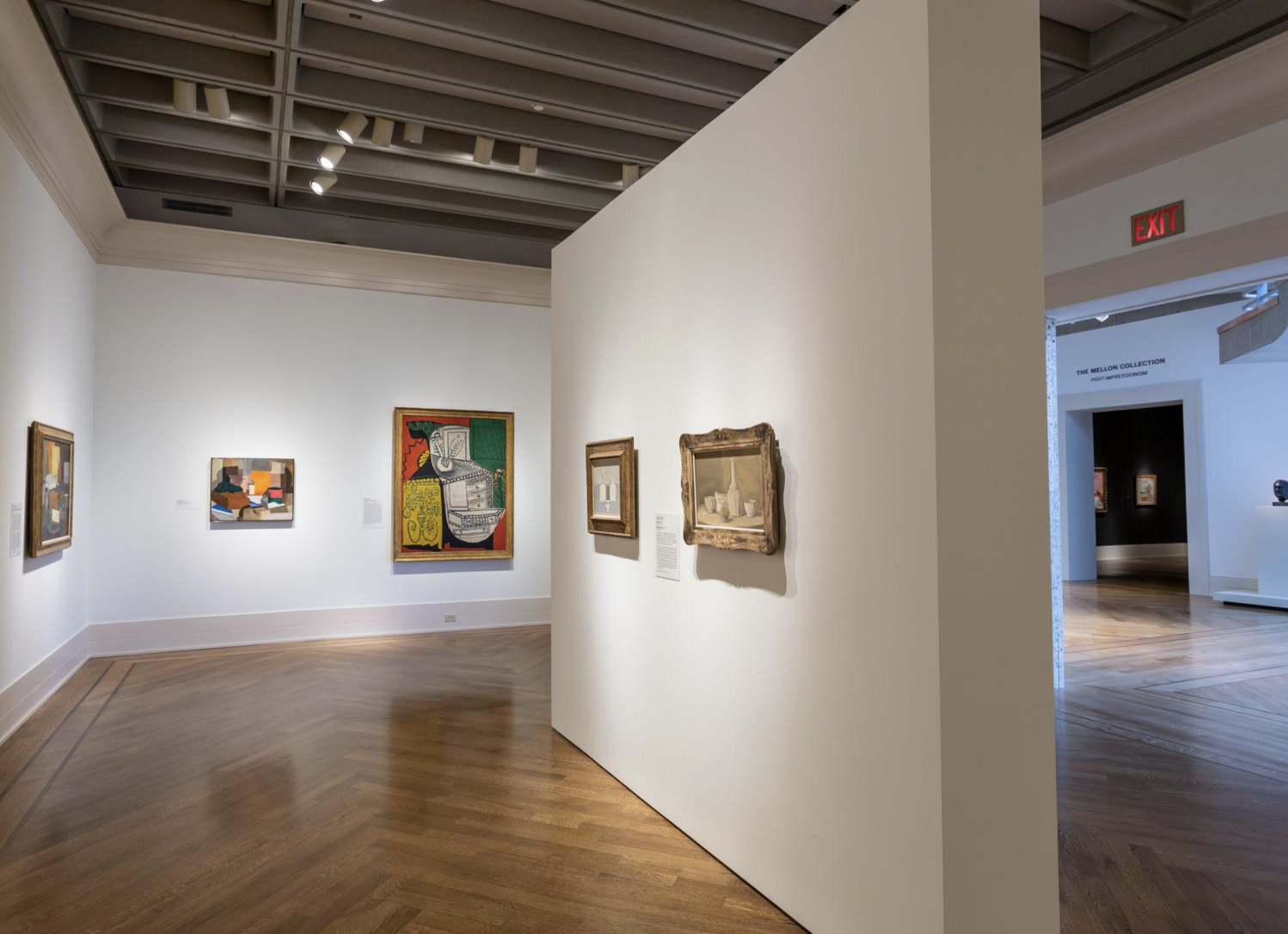 The reinstallation project also bridged the Mellon legacy with the museum’s new Paul Mellon curator and European art department head, Sylvain Cordier (who was with the Montreal Museum of Fine Arts until two years ago). Few new curators get to reinstall their fiefdoms so soon.

“I prefer working with a blank page,” said Cordier, a native Parisian, by telephone recently. “But it doesn’t happen very often.”

Second floor visitors who now approach the Mellon French galleries from the Marble Hall will enter a surprisingly nocturnal environment. The first two galleries have been painted a dark shade of blue and a deep cranberry, respectively. The paintings, which are individually lighted, appear to be backlit. They pop.

Such wall coloring and lighting is unusual since impressionistic works, often associated with the out-of-doors and changing light of day, are traditionally displayed on light-hued, or white, surfaces. Cordier describes the Mellons’ Renoirs, Bonnards, Van Goghs, Matisses, Monets and Seurats as “intimate” and “discreet and subtle masterpieces.”

Upstairs, we get a glimpse into the Mellon’s individual collecting passions. Paul Mellon was a horse breeder and his English equestrian paintings occupy three galleries. The gallery colors derive from 18th century and early 19th century palettes perhaps associated with the Adam brothers, influential British architects and tastemakers. A witty and sly theatrical touch is the placement of a stylized Greek revival-styled chaise the VMFA has devised for visitors’ relaxation. 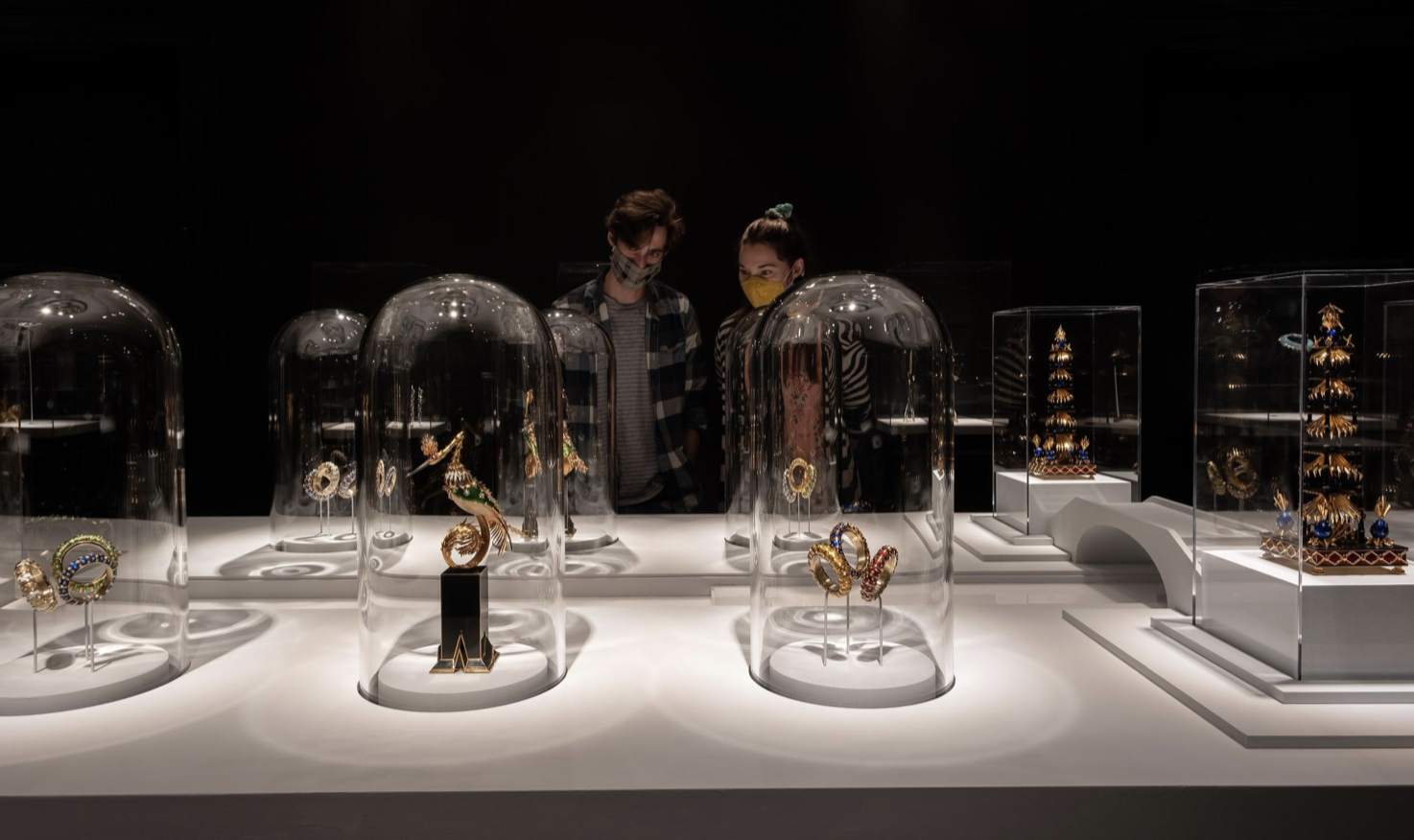 Visitors are fascinated by the jewelry and bejeweled art objects by French designer Jean Schlumberger.

Rachel Mellon’s personal collecting passion is commissioned pieces of jewelry by French designer Jean Schlumberger. For the jaw-dropping works, the installation is simplicity itself. Walls are painted a shade of dark gray (Benjamin Moore’s “Wrought Iron” to be exact). Such objects as “Jellyfish,” crafted of 18-karat gold, platinum, moonstones, diamonds and sapphires appear to levitate. Magnificent.

The Mellons’ benevolence to the VMFA is legendary. In addition to shipping the works of immeasurable beauty now-displayed to the museum, in 1985 they contributed to constructing the wing that their galleries occupy. In 1954, they financed the modern and elegant Leslie Cheek Theater, which for decades housed a professional theatre company. The couple also provided for an art mobile and donated a world-class collection of the art of India and the Himalayas.

The VMFA fostered Paul Mellon’s direction in collecting. In 1958, the museum asked him to chair an exhibition committee for “Sport and the Horse.” The experience so spurred his interest in British art that in 1963 some 400 of his pieces were featured in the VMFA’s spectacular temporary exhibition, “Painting in England 1700-1850.” The museum cleared all of its major galleries to accommodate his treasures. What chutzpah, an unwritten memo read: “Picture your collection housed permanently on the Boulevard.” 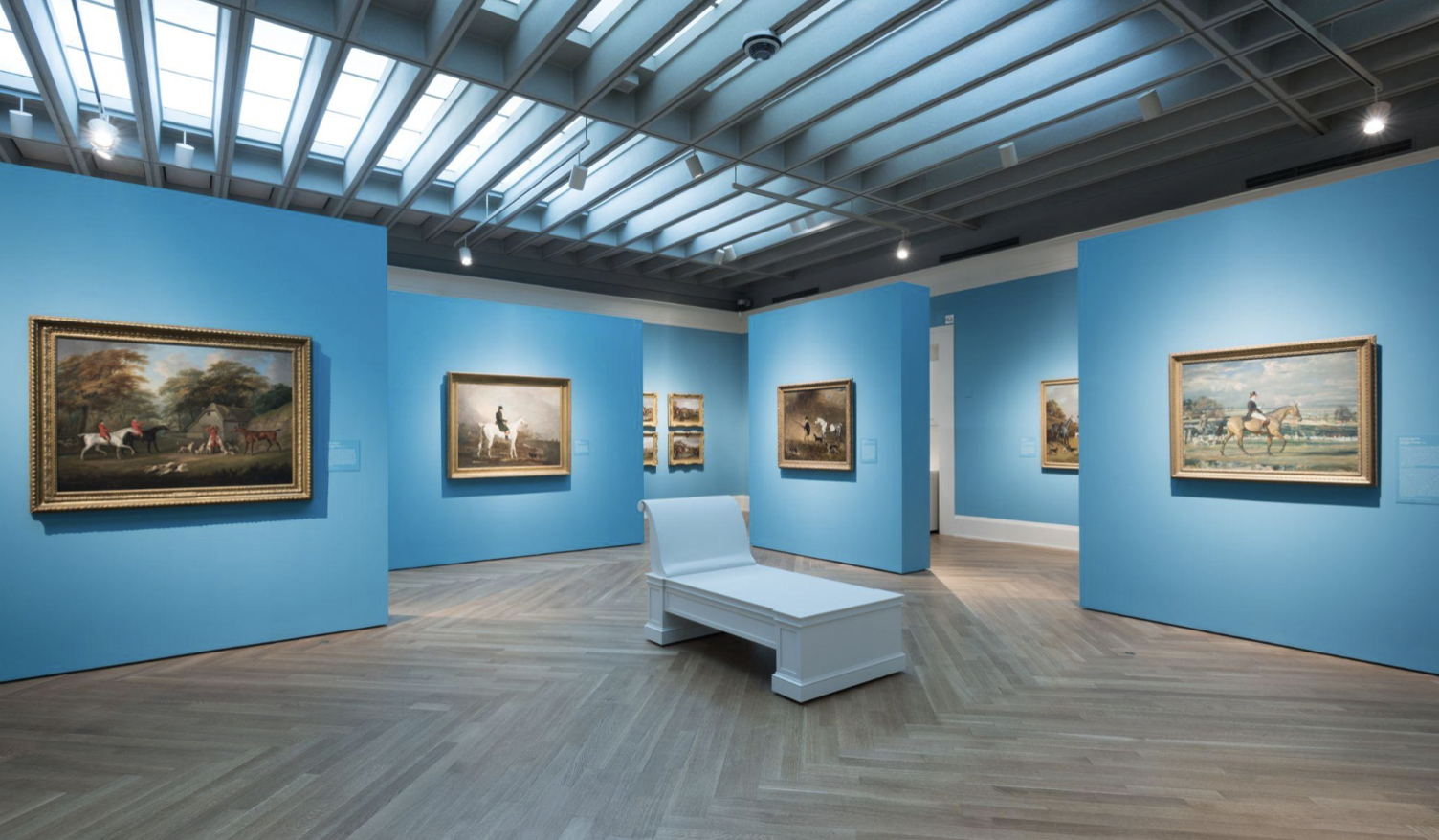 It was not to be. Paul Mellon’s English collection can be visited on the campus of his alma mater in New Haven, Ct., at the Yale Center for British Art.

Paul Mellon’s family fortune was based on the Pittsburgh-based Mellon Bank (later, the Bank of New York Mellon). Rachel Mellon was an heir to Warner-Lambert (manufacturer of  Listerine, now part of Pfizer). In the 1930s, Paul’s father founded the National Gallery of Art in Washington, D.C. after serving three presidents as Secretary of the Treasury. It was horses that brought Paul and Rachel Mellon to Virginia.

VMFA is kicking butt and locals should take advantage of it. I’m a recent Renoir convert. VMFA narrowly missed out on the Clark family collection of Renoir and Monet masterpieces now shown in the Clark Museum in Williamstown, MA, home of the family alma mater Williams College. Before Clark built the museum there, he had a Will drawn (later changed) designating those works to the VMFA. Hopefully, the VCU School of Business will produce more collectors who will want to keep their works at home in the future. I recommend art lovers take the trek to western Massachusetts to see… Read more »

Very disappointing that BizSense has chosen to begin running irrelevant puff pieces disguised as news. When do the music reviews and the horoscope forecasts begin?

Leave it to Edwin Slipek to provide illuminating comments about the venue as well as give us the history to understand the personalities and decisions that led to this wonderful exhibit.