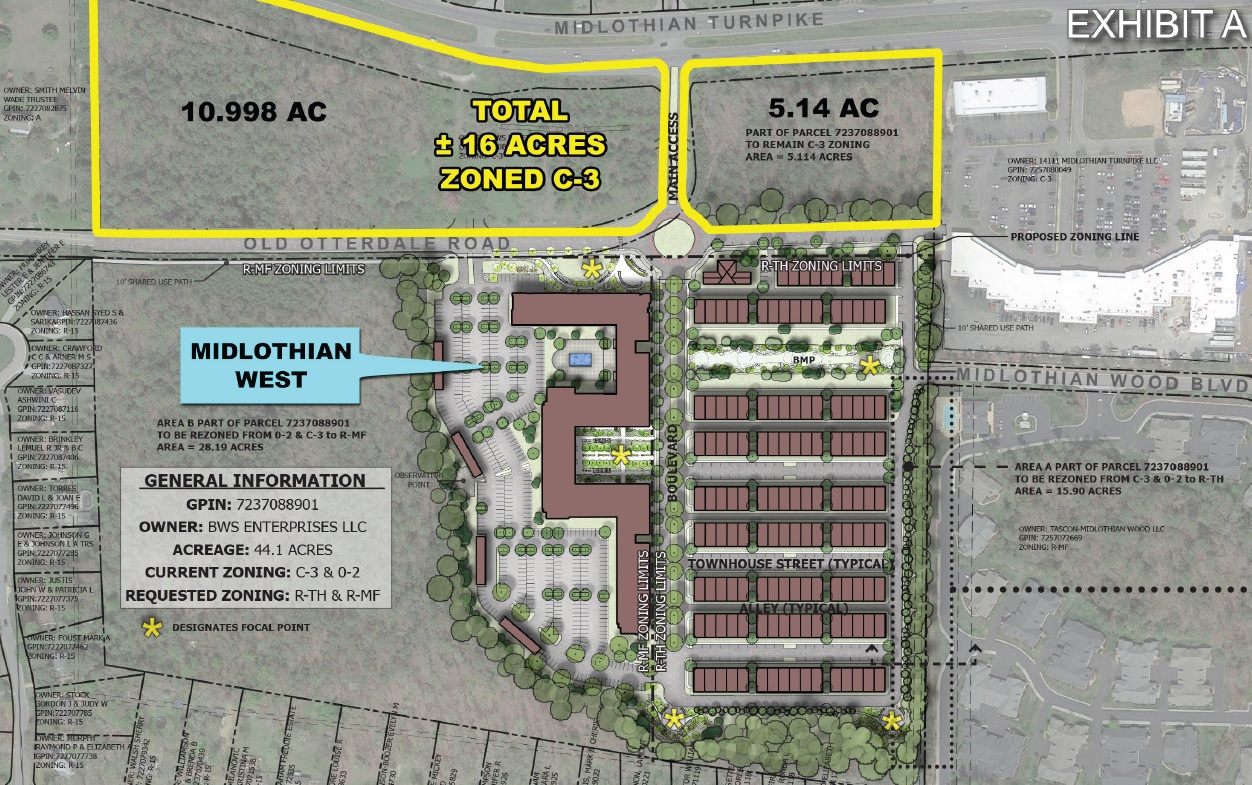 With a local homebuilder on board for the project’s first phase, the green flag is being waved for a Midlothian development that’s being driven by former owners of Richmond Raceway.

Main Street Homes has signed on to build 150 townhomes that will make up the first phase of Midlothian West, a residential and commercial development planned for a 44-acre site at Midlothian Turnpike and Old Otterdale Road.

The Midlothian-based builder in August purchased a 16-acre portion of the currently wooded site, which is across Midlothian Turnpike from the Winterfield Crossing development and just west of the Kroger-anchored Ivymont Square Shopping Center.

The company paid $4.5 million for the parcel at 14351 Midlothian Wood Blvd., which forms the site’s southeast corner. The deal closed Aug. 26, according to Chesterfield County property records, which did not list an assessment value.

John Costello, Main Street Homes’ land acquisition manager, said construction on the townhomes is planned to start next spring, kicking off a multi-phase development that’s also approved for 275 apartments. A retail area fronting Midlothian Turnpike is planned as well, with developer BWS Enterprises taking the lead on those.

“The first phase of the development will be our townhouse development,” Costello said, adding that work would include construction of a roundabout on Old Otterdale Road.

“I don’t think they’ll be far behind us with the commercial component. I believe the multifamily apartments are still a few years out,” he said.

County supervisors approved zoning for the apartments and townhomes in 2018. Costello said the apartments would finish out the development, following the commercial section that would front the turnpike.

The three-story townhomes would include covered porches on the second floor. (BizSense file)

Taylor Long Properties is handling leasing for the commercial section, which would consist of retail pad sites. The brokerage’s Robert Marshall, who’s handling leasing with owner Ellen Long, deferred comment on the project to BWS’s Sean Sawyer, who could not be reached.

Sawyer is a son of the late Wayne Sawyer, who ran BWS with his brother Billy. The brothers once owned Richmond Raceway before selling it in 1999 with their father, Paul Sawyer, who led the racetrack’s transformation from a dirt track to the present-day raceway complex.

Wayne, who also invested in other real estate projects in the area, died Nov. 19.

The townhomes are planned to rise three stories and include covered porches on the second floors off the kitchen areas. Units will range from 2,000 to 2,600 square feet in size and include two to three bedrooms and a flex space on the first floor that can be converted into a fourth bedroom.

Prices for the homes are anticipated to start in the mid- to upper-$300,000s, though Costello noted that pricing has not been finalized. A clubhouse also is planned, and access to the site would be provided via the roundabout and a connection to Midlothian Wood Boulevard, which runs behind the adjacent shopping center.

Midlothian West continues a westward wave of development along the turnpike that’s included Winterfield Crossing, which continues to take shape across the street. The Blackwood Development-led project recently secured a new concept from EAT Restaurant Partners and will be home to a third location for Triple Crossing Brewing.

Meanwhile, Main Street Homes continues to develop Cosby Village, a 68-acre project at Otterdale Road’s intersection with Hull Street Road. Earlier this year, the company paid $7 million for a 47-acre site nearby, where it’s planning a $160 million development with up to 400 townhomes and a senior living facility.

All Trees must be eliminated in Chesterfield and paved over.

I really hope they build sidewalks and put in pedestrain crossings along this section of Route 60 and along a lot of the local roads.