Wong’s Tacos is slated to join Winterfield Crossing in Midlothian. The restaurant’s space will be built as part of a new phase of construction at the mixed-use development. (Jack Jacobs photo)

Editor’s note: This story has been updated to include an update about the Hot Chick location planned for Winterfield Crossing.

The local restaurant group plans to open a new Wong’s Tacos in a to-be-built, 4,000-square-foot space at the Winterfield Crossing development by early spring 2022.

Chris Tsui, owner of EAT and its 13 restaurant concepts, said Midlothian’s demographics and the company’s familiarity with the area led to plans for Wong’s at Winterfield.

“We have been looking for a second location for Wong’s and we know that area, being we have Wild Ginger (in Midlothian),” Tsui said last week.

The original Wong’s Tacos opened in the GreenGate development in Short Pump in 2019, and serves up an Asian-Mexican fusion menu focused on tacos. Tsui said the Midlothian Wong’s Tacos is expected to have the same menu.

Tsui said most details for the new restaurant haven’t been hammered out yet. The restaurant will be slightly smaller than the Short Pump location. Though EAT hasn’t settled on a dining room design, Tsui expects the restaurant to have fewer than 120 seats.

“We’re definitely excited about Wong’s, but it’s a ways away,” he said. 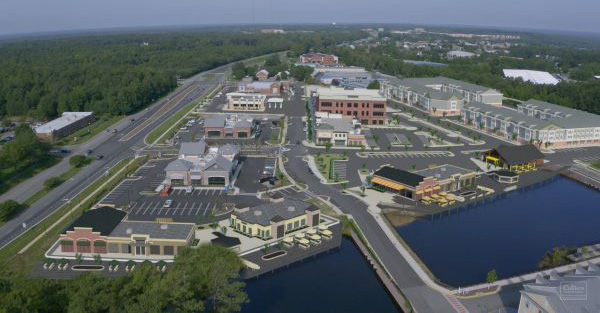 The second location of Wong’s Tacos would be part of an upcoming restaurant-and-entertainment section along the ponds at Winterfield Crossing in Midlothian. (Courtesy of Colliers)

EAT also had previously announced plans for a Winterfield Crossing location of its Hot Chick concept, which originally opened in Shockoe Bottom. The company said those plans are on the back burner for now. The Wong’s space in Winterfield is not the same storefront EAT is considering for Hot Chick.

Wong’s Tacos will be part of a pond-side restaurant-and-entertainment area at Winterfield Crossing that’s just now beginning to take shape.

That section of the development will feature a taproom for Triple Crossing Brewery in a 3,000-square-foot space beside the future Wong’s space. The two spaces will be linked by a shared boardwalk area, said Blackwood partner Marc Greenberg.

The boardwalk will extend toward Midlothian Turnpike and link additional new buildings in the restaurant-and-entertainment area.

“It’s a nice water view and we’re building a boardwalk and patio system that will run the length of the property,” Greenberg said.

The development is anchored by Aldi and is expected to feature 250 age-restricted townhomes. Co-working chain Gather opened an outpost at Winterfield Crossing in 2020.

Not sure if this is due to the upcoming development, but that “pond” is almost completely dry right now. It has been drying out for months now. I think promoting that as a “water view” is a little misleading.

That pond is a storm water detention facility, controlling runoff from all the impervious development surrounding it. We only had 1/4 inch of rain in May until this weekend’s deluge. I bet its got water in it today.

Coming soon is another 250 units of apartments by CMB the builder of the apartments of Winterfield Station. These will be age-restricted for 55 and older folks. The commercial construction will be an amenity to these new residential units.

They drained it for construction purposes.

I thought EAT was opening a hot chick in this location? Was that canceled?

Ian, that’s mentioned in the article.

Disappointing to hear that Hot Chick is on the back burner, but still does give me some hope. The Smoke Show is probably my favorite sandwich in all of Richmond currently.