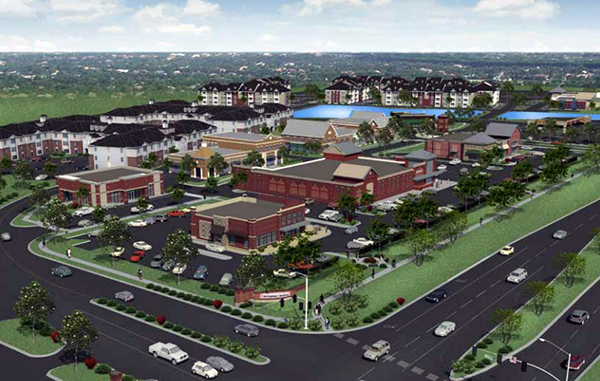 With its initial phase of apartments underway, a new Midlothian mixed-use development has lined up an anchor for its first section of commercial space.

German grocery chain Aldi is under contract to purchase 2 acres for a store in the Winterfield Crossing development, a 25-acre project taking shape along Midlothian Turnpike and Winterfield Road that eventually will boast 100,000 square feet of retail and restaurant space, a mix of 238 market-rate units and up to 250 age-restricted apartments, and 20,000 square feet of office space.

Marc Greenberg, a partner with Midlothian-based Blackwood Development Co., which is behind Winterfield Crossing, said the Aldi deal is expected to close in coming months. He said the grocery will look to open a 20,000-square-foot store near the Old Otterdale Road and Midlothian Turnpike intersection in 2019.

Plans are also moving forward to construct an 8,800-square-foot retail strip within the development at an entranceway that will line up with the main entry into the Kroger-anchored Ivymont Square Shopping Center across Midlothian Turnpike.

Greenberg said there are several letters of intent out for some of the retail space, but no leases have been signed. Cushman & Wakefield | Thalhimer is handling the leasing.

Greenberg said the developers are working to construct another 8,400-square-foot retail strip next door to the first.

The traction on the commercial phase comes after nearly two years of revisions, community meetings and negotiations with Chesterfield County planning staff for the overall project, which was approved last summer.

Dubbed Winterfield at Midlothian, the nearly $40 million apartment development will begin preleasing its one- and two-bedroom units this fall, with an anticipated completion date by yearend. Amenities will include onsite bikes, a gym, pool and business center.

Newport News-based Drucker & Falk will oversee leasing and management of the apartment community.

Winterfield at Midlothian also will include 20,000 square feet of office space that is being marketed for lease by Colliers International.

The general contractor on the apartments is Purcell Construction, which also is working with Blundon on the $40 million, 10-story River’s Edge residential tower in the City View Landing development in Manchester. Richmond-based Winks Snowa Architects designed the Winterfield apartments.

Once the first wave of apartments are completed, Blundon said the work could begin on the age-restricted apartment portion of the development, which he estimates could cost up to $40 million to complete.

Work on Winterfield Crossing comes as the Midlothian section of Chesterfield County enjoys one of the highest concentrations of new apartment development in the region.

More than 1,500 units have either been approved, or are in various stages of planning, within a mile-and-a-half of Winterfield Crossing.

Midlothian West, a development comprising of 275 apartments and 170 townhomes, is in the works across the street.

Westchester Development Partners, made up of Chesterfield County developers Casey Sowers and George Emerson, is proposing two buildings totaling 236 apartments on a 5-acre parcel overlooking 288 at the northeastern edge of Westchester Commons.

Correction: Drucker & Falk will handle leasing and management of the Winterfield at Midlothian apartments. An earlier version of this story incorrectly named another company.