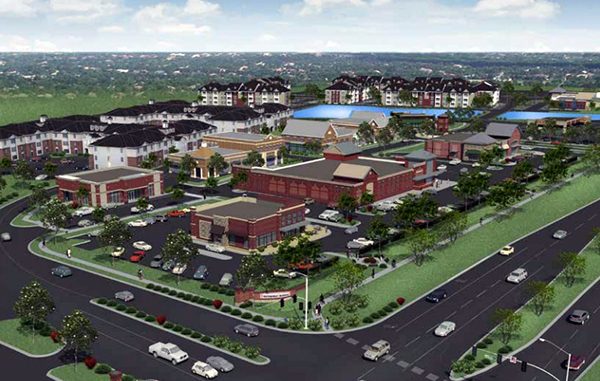 A much-debated mixed-use development in Midlothian first proposed in 2015 has secured the approval it needed to become reality.

That clears the way for the development’s mix of 250 age-restricted apartments and 100,000 square feet of commercial space designed to be pedestrian-friendly with a village-style layout.

The latest iteration of the project was given a thumbs-down in January by the county planning commission, which said it failed to address traffic impact concerns or integrate its mix of uses into a village-style design. Following multiple deferrals, the most recent last month, the project was further revised in response to those concerns, which supervisors said had been met to their satisfaction.

“I have to say thank you to all of those people who came together,” Midlothian District Supervisor Leslie Haley said before motioning for approval. “I’m proud to support this development.”

“Thank you for not giving up on this case, because there have been a lot of changes and iterations,” said Andrew Condlin, an attorney with Roth Jackson who represented Blackwood in the case.

Among the most recent changes were the redesign of a roundabout at the entrance off the turnpike, decreased buffers along the turnpike to bring buildings closer to it and increase their visibility, and the removal of apartments previously proposed above retail in some of the buildings. 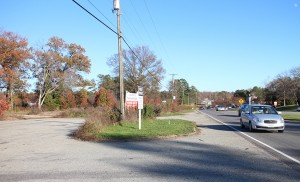 Commercial tenant spaces would be restricted in size, and any fast-food restaurants that locate in the development would have to be located in shared buildings and would not be allowed standalone structures.

A grocery anchor is proposed – renderings have shown an Aldi – and the 250 apartments, restricted to ages 55 and up, would be built farthest from the turnpike, on the northern side of the property along a bordering railway.

Condlin and county planning staff mentioned planned amenities including a brewery, promenade and gathering spaces. Condlin said a three-story office building in the center of the development would provide co-working space.

Condlin said the project is estimated to cost $40 million. Ashland-based Perretz & Young is the architect, and the designs were drawn up by Midlothian firm Timmons Kelley Architects.

Blackwood purchased the site in 2012 for $2 million. The land is part of a 58-acre area once slated for a mixed-use project called Midlothian Town Center, which fell into foreclosure in the wake of the recession. Pieces of that land were picked up by Blackwood and fellow Midlothian-based developer Rebkee Co., which is developing the nearby Winterfield Park across the railroad tracks.

Developer Guy Blundon, who spoke in favor of the project during a public hearing, is planning a nearly 250-unit apartment complex on 8 acres next to the site. Work on those buildings is set to start later this summer.

Winterfield Crossing still needs site plan approval before construction could begin, but the rezoning clears the path for the project to go forward.

Amy Satterfield, president of the Midlothian Village Volunteer Coalition, which worked with Blackwood and the county on the revisions, said the citizens group supports the development.

“We now agree that this development honors the existing zoning and supports Midlothian Village as a whole,” she said.

Congratulations to the entire Blackwood development team for their persistence in this entitlement process, as well as to the community and county staff for their hard work. This will be one of if not the nicest of all mixed use suburban model centers in central Virginia.

I for one hate going to Short Pump and this is going to be the same. Midlothian will be horrible. The traffic will be ridiculous..every time we go to short pump I feel like I’m going to have a meltdown with the traffic at any given time of day. God help the people who live it that area.

More empty storefronts…Westchester, Sycamore Square and Charter Colony Shoppes (once Martins closes) within a mile or so and largely empty.

Those are traditional strip shopping centers with no residential component. They were archaic the day they were finished. The County is working with the owner of Westchester to fix its mistake. Sycamore Square has been a dead-man walking ever since competition arrived to Midlothian. It was ill-conceived from day one, and needs to be completely re-purposed.

Unlike the owners of the other shopping centers, BDA is a local player–the developers live in Midlothian– that has a better handle on the local market, and its plan includes high density upscale residential. They’ll fill those stores.

If the developers live in Midlothian, all the more reason for them to invest in the existing community and focus on re-purposing the existing empty properties rather than moving further west and building new ones. Oh, except that costs too much and there’s less profit to be had. Follow the money.

I’m not sure that is how private property works. The owners of this property cannot just go “repurpose” someone else’s shopping center.

Midlothian residents, welcome to the Short Pump Town Center/Broad Street Village/Green Gate world of chaos, noise, and insane traffic. Enjoy your peace and quiet while it lasts as you pass by the empty storefronts of once-thriving businesses on your way to Powhatan and far beyond to view a tree, a pond, or an undeveloped piece of land.

As Mr. Signs stated above, there is plenty of vacant storefronts and parcels from Westchester down the turnpike in Midlothian. Perplexingly, genuine mixed-use of residential over commercial was tossed aside for stand alone strip-mallview apartments. Midlothian runs the risk of becoming a cheaply made apartments mixed with chain retail/fast-casual a la Gallows Road in NoVa. No amenities at all in Midlothian for seniors but an age restricted residence nonetheless. Perhaps walking to the gleaming new adjacent CVS for your depression script is considered one.

Why are these new shopping centers so concerned about putting apartments right next to storefronts? If you’re not planning on renting one, what value does that add to the average consumer? I’m not sure I understand this layout

Jeff, they think this is what constitutes mixed-use. Residential abutting parking lots. Instead of having fluidity, something more in line with that movie-set neighborhood of West Broad Village up in Short Pump, where residential is commingled/over commercial, they build awkward apartment islands on seas of asphalt. How about those cheapo Ryan Townhomes overlooking a gas pump and a soon to be vacant 2 year old Martin’s in Midlo village. Nobody is thinking, just rubber-stamping.

I grew up in the West End and simply despise going to Short Pump as it way to crowded on that Broad St. corridor.

With that being said having lived in Midlothian now for over 13 years, I see the same things happening here as the West End.

Hull Street out towards Amelia, Midlo out towards Powhatan seems just like Broad St. towards Goochland.

That whole area is going to get even worse once the “mix-use” area is devleoped off Charter Colony.

Growth is fantastic but in more feasible ways.

Looks like a nice development. For the one’s who oppose this- if you have a problem with traffic, that’s what the rural areas are for. Richmond is the capital of VA and a fast growing city that will one day join the NOVA area. Richmond is a growing city and if a developer wants to bring a upper class development, better that then a Walmart or section 8 housing. Be happy this is upper class because developers will always build whether you like it or not. When they propose fine housing and shopping, don’t just say “NO” be happy it’s… Read more »

Midlothian is not the capital of Virginia. Western Midlothian, as a point of fact, is mostly exurban. The problem is sprawl, y’know, when the countryside is consumed by the city? Exurban suburbs have a very short shelf-life. After 15 years, the beige vinyl-sided front loading garage dwellings lose their appeal, with those “high class” folks. They move on to the trendy pseudo arts & crafts with amenities hoods. Nevertheless, they’re throw away homes, just like those apartments. In 15 to 20 years they’ll be filled with the low class people you’re afraid of, as the high class folk jump ship… Read more »

Props to Midlothian for providing more density. As a recent transplant from the DC area who lives in Short Pump, I find the traffic situation here a breeze. I understand that for some this is a change, but development brings with it residents, jobs, and much needed revenue.

The ennui born from places not worth caring about, AKA the sprawlburbia enabled by our city planners and supervisors where endless strip malls and subdivisions reign, demands vape shops, tattoo parlors, and fentanyl rehab clinics.

i wish someone would build another grocery store. shm