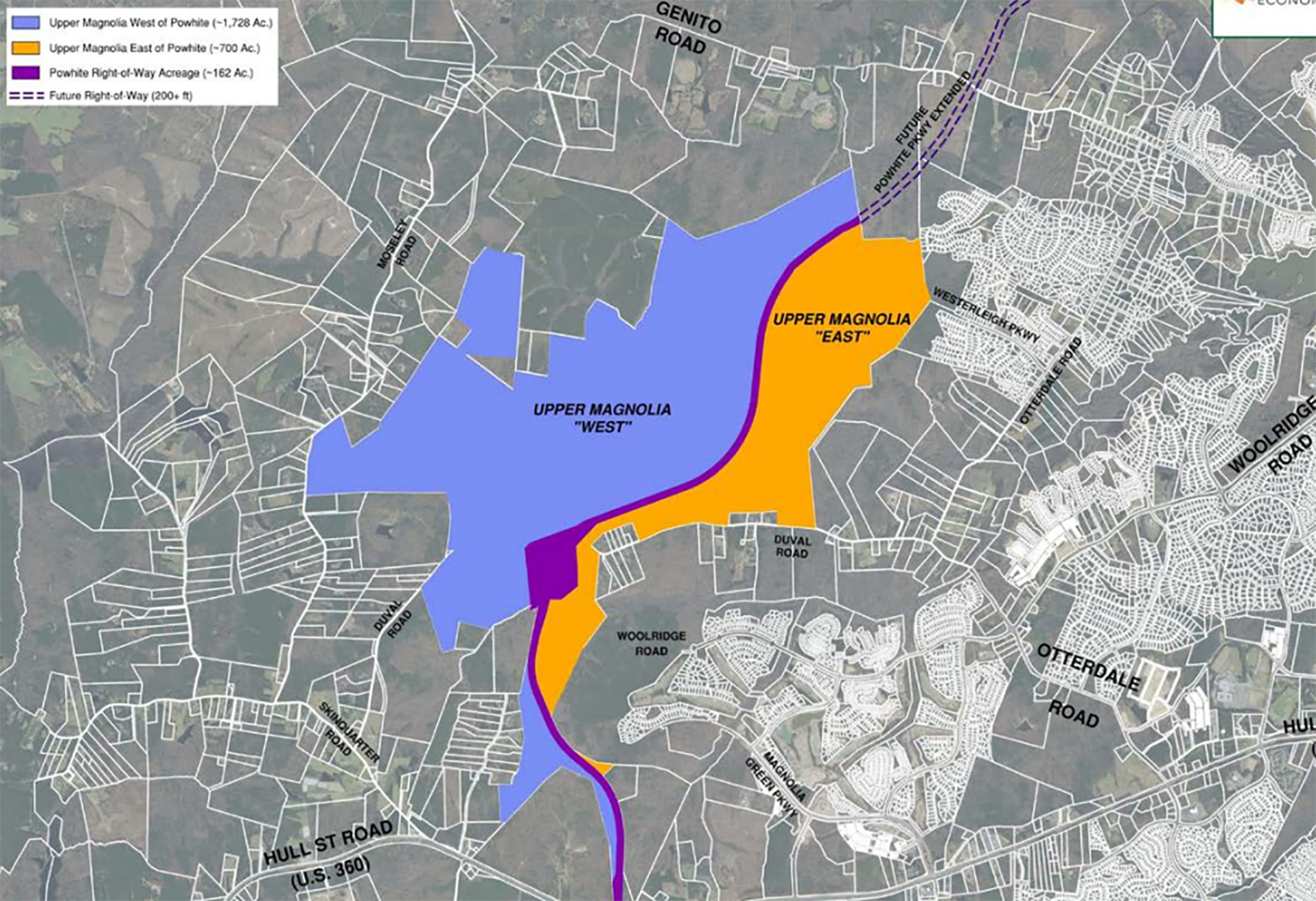 Chesterfield County is seeking to rezone about 2,400 acres in the western part of the county to set the stage for a technology park to the west of the proposed extension of Powhite Parkway and residential development to the east. (Courtesy of Chesterfield County)

A year after Chesterfield County scooped up about 2,000 acres near Moseley, county officials are now weighing a formal rezoning plan to guide development of that property and surrounding land.

Chesterfield intends to rezone the so-called Upper Magnolia Green property, where a westward extension of Powhite Parkway is also planned, to make way for a 1,700-acre technology park and a 700-acre area for single-family homes and public facilities.

“There’s an economic development interest to create an area that could be a source of employment-generating uses in that part of the county, which doesn’t currently exist. Another key element of this is to make good on public uses,” Assistant Planning Director Stephen Donohoe said in an interview last week.

“We’re designing this in a way so that there’s development options and flexibility in the future, but we know the type of development we want to accommodate,” he said.

As for the residential component of the site, the county’s rezoning proposal would allow for up to 600 single-family detached homes in a 500-acre area, leaving 200 acres for public buildings.

The county buildings could include at least three schools and a library, County Administrator Joe Casey said during his State of the County address last week.

The game plan for the undeveloped acreage represents a major shift from a 1990s zoning of the same area that allows more than 1,000 residential units, Donohoe said.

“This changes the course for development in that part of the county. It’s no longer going to be large residential. Residential is really secondary in this proposal we have put together,” he said.

The project area consists of about 1,900 acres that the Chesterfield Economic Development Authority bought for $13 million last year, as well as about 600 acres not owned by the county.

The county will hold a hybrid in-person and virtual community meeting Dec. 16 to present information about the proposal and gather public feedback.

The board initiated development of the rezoning proposal in September. The scope of the project was increased after adjoining property owners requested their land be added to the project.

They need to keep it as a 1,000 acre park or 2,000 acre park to keep a section of green space in this fast growing part of the county. This would keep everything from getting paved over.

That comment doesn’t make any sense in the context of this article. You seem to be quite passionate about a word that you don’t even know the definition of.

They need to focus on infrastructure to handle all of the development that is going on already plus the additional developments along the way on Genito. Upper Magnolia East sounds helpful as our schools are all significantly overcrowded with no signs of slowing down. I would prefer they pump the brakes on Magnolia West unless they have a good plan that the Moseley residents can get behind.