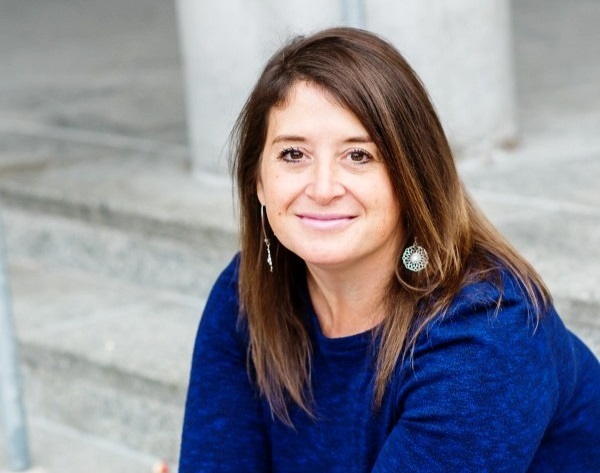 Jessica Collins, an assistant professor in VCU’s advertising program, is the 2021 Ad Person of the Year. (Photos courtesy of VCU)

While her advertising career pre-VCU was more on the strategic planning side, finding ways to teach classes amid the pandemic has given Jessica Collins an opportunity to flex her creative muscles.

An assistant professor at VCU’s Robertson School of Media and Culture, Collins was halfway through her 2020 spring classes when the pandemic’s arrival cut the semester short, leaving her classes unfinished and robbing her students of the summer internships and interview opportunities they were expecting.

So, she got creative, leaning on the strategic planning skills she’d picked up in her pre-academia career at such places as The Martin Agency and Free Agents Marketing.

Among her efforts, Collins helped coordinate “Camp ADventure,” a virtual advertising summer camp that ended up drawing 200 “campers” from colleges and universities across the country. She also used her connections to attract big names in the industry as mentors or featured speakers. 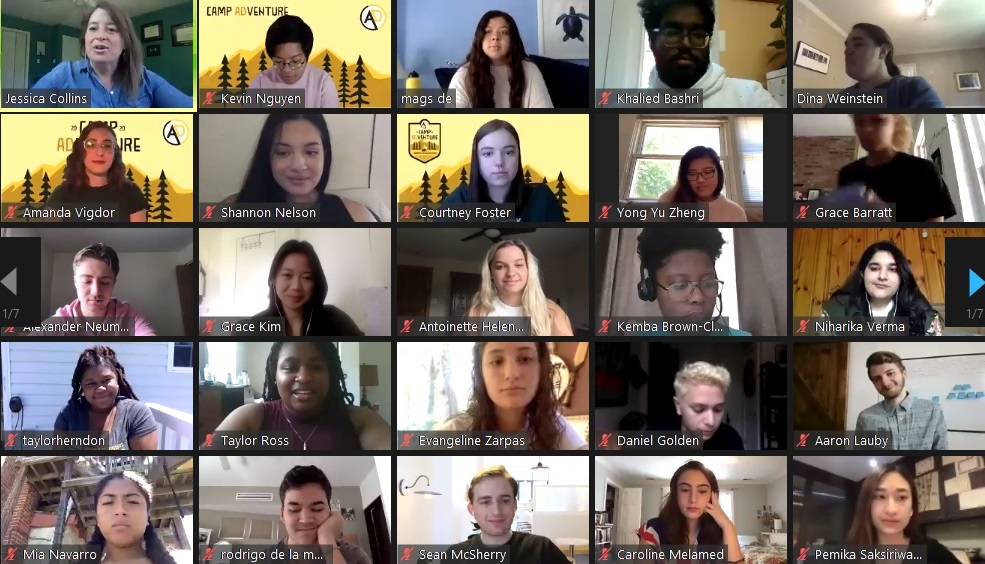 Collins, center, with students who helped bring Camp ADventure back for a second year.

Such efforts over the course of the pandemic, and ever since she joined the Robertson School in 2018, earned Collins the title of 2021’s Ad Person of the Year at the annual Richmond Show put on by the Advertising Club of Richmond.

The recognition made Collins the second VCU ad professor to receive the title in recent years, following program coordinator Scott Sherman’s recognition in 2017.

Over a Zoom call, Collins talked with BizSense about her recognition, her approach to teaching amid the pandemic, and her approach to creativity and strategic planning. The following is an edited transcript:

Richmond BizSense: Congratulations on being named Ad Person of the Year. What was your reaction when you learned of the recognition?

Jessica Collins: I thought it was a joke. I was completely shocked.

It was funny, my good friend Corey Lane, who works at Elevation – we used to work together at The Martin Agency – he said he wanted to talk about some things, so we had a meeting. He said, “I need to share a screen really fast,” and he put up a slide that said, “Jess Collins: Ad Person of the Year.” I was like, “What?” Because I was expecting another slide to pop up.

It’s just such an honor, and I was completely blown away. It wasn’t anything that was even on my radar. 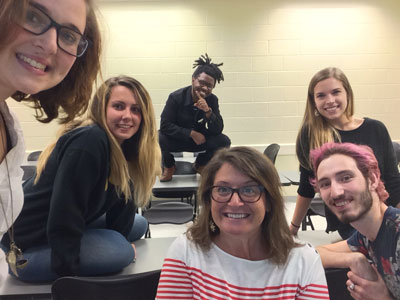 Collins with students in the advertising program at VCU.

RBS: The award recognized your efforts through the pandemic. Walk us through how that all played out.

All of this hit within three weeks of each other, and I felt like the students were just constantly being hit with academic disappointments, in addition to personal disappointments. It was a moment where I’m sitting at home behind a screen and I just thought, “I’ve got to figure out how to make this work for the students that I love so much.” It was just really putting my head down and thinking about how I could keep, through all these initiatives, their last semester or their last couple of years as normal as it could be.

RBS: You also brought in some industry heavy-hitters to participate. How did that all come together?

JC: What we found was that people were really willing to give a lot of help back. It was a moment where students are struggling, but then at the same time other people were like, “Well, I’m sitting at home. How can I help other people?” Seeing the generosity of people willing to help out from a mentorship perspective or interviews, that was sort of what kept me going.

RBS: How did your professional experience from before VCU play into what you were doing?

JC: The benefit of being in advertising, especially in that I’m a strategic planner by trade, is that by nature our job is to be a problem-solver. That’s the environment we’re in, and any given day you could be faced with solving six problems, because a PR nightmare happens, a product’s messed up, a client changes their mind, so you’re just programmed to constantly be looking for Plan A, Plan B, Plan C. 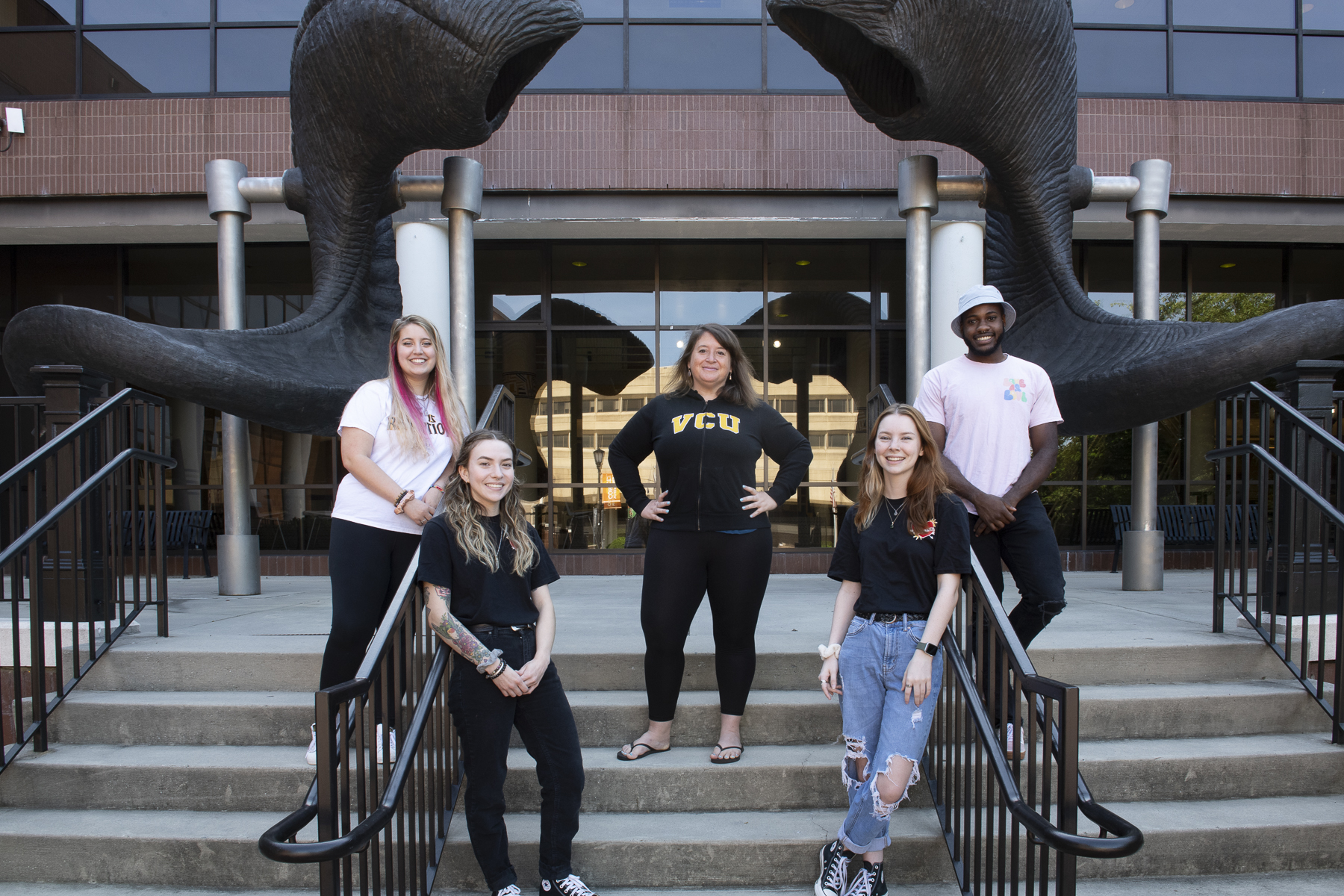 Collins, center, with students who helped bring Camp ADventure back for a second year.

RBS: How do you keep your mind fresh as a creative person? Are there certain sources you go to for inspiration?

JC: I watch a lot of reality television. If you talk about fascinating, that to me is fascinating. Also, selfishly, in my research class I have an assignment that everyone has to do twice. It’s on a pop culture moment. People have to come in and tell me something that happened in the past month – what happened and why is it important and how does it affect the industry.

It’s teaching them to have a point of view and have an opinion on something that isn’t so business-like. But also, selfishly, it keeps me up to date on everything out there. Clearly, I read AdAge and Adweek, but I look at Perez Hilton a lot, because that is what we are, culture, and I want to know what all the things are out there happening.

RBS: What’s your take on Richmond’s ad scene. Are there certain shops in town whose work you admire?

JC: I used to work at Martin, so I have an allegiance. Arts & Letters, from a storytelling perspective, their work is brilliant to me – the stuff for Google and ESPN. Fable is one of my favorite “smaller” shops, because their work is always based in storytelling and is brilliant. Elevation does amazing work. Tilt is growing and they’re doing cool stuff. Everyone has sort of found a niche.

It’s almost like Richmond has a become like a mini-America. It used to be if you want a big shop, go to New York. We have basically the ad world in a city: big shops, small shops, medium shops, entrepreneurs, freelancers, production companies, client-side. I’m Richmond-born and raised, so I feel like people are finally seeing all of the magic that we’ve always known existed here.

RBS: If you could ask any person – in or outside the industry, alive or dead – one question, who would that person be and what question would you ask?

JC: I would have a long conversation with Elvis Presley. I’m a big Howard Stern fan, and a couple years ago they were talking about how Kanye West was going crazy on Twitter, and Howard Stern said, “Can you imagine if Elvis Presley had a Twitter?” This craziness with celebrities has always been around; it’s just they used to have a handler. Ever since I heard that, it cracks me up: “What would he have (tweeted)?”