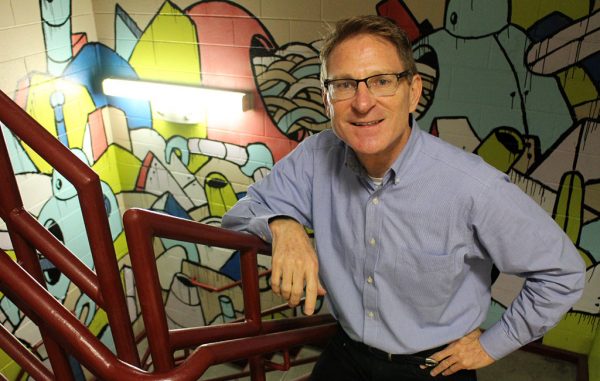 Scott Sherman has been teaching in VCU’s Richard T. Robertson School of Media and Culture since 2004. (Jonathan Spiers)

When Scott Sherman learned that the Advertising Club of Richmond had named him this year’s Ad Person of the Year, the associate professor and coordinator of VCU’s undergraduate advertising program reacted to the news – he admits it – with tears.

A former VCU student himself, Sherman has been teaching in the university’s Richard T. Robertson School of Media and Culture since 2004, after 20 years in the ad business that included stints in the creative departments of local agencies RightMinds and Landmark Advertising, the in-house advertising arm of Markel Corp.

In his role at VCU, which has evolved over the years from an adjunct professor to his current tenured post, Sherman has taught countless students who have gone on to careers in advertising, providing them with a starting point while sharing the basics of the business.

BizSense sat down with this year’s Ad Person of the Year to discuss the recognition, what he teaches his students about the creative process, and his perspective of the industry from his spot at the front of the class. The following is an edited transcript:

Richmond BizSense: How did you get into advertising? What brought you to VCU?

Scott Sherman: I didn’t really know what I wanted to do. I graduated high school, just went business in college. My sister said, “You should think about advertising.” I didn’t even know it was an industry, growing up on military bases.

I came down here and took some undergrad advertising classes and got an internship at Carlton Communications, a small little shop here in town, and I really loved it. I found that it was a good place for me. I kind of “got it” – it was one of those subjects that wasn’t like physics, which I didn’t get it. And I liked Richmond. It has a vibrant ad community.

RBS: Does the VCU Advertising undergrad program coordinate much with the Brandcenter?

SS: The Brandcenter is a remarkable place, world-class facility, and we’re the No. 1 feeder school for it. We send a lot of students there, and our teaching philosophy and our process is very much like the Brandcenter’s. It’s collaborative projects, real-world. We don’t teach a lot of theory. It’s practical, “jump in, get your feet dirty.” I think when they see somebody come from our program, they have a good sense of what their background is and what they’ve been through.

RBS: You mentioned Adam Mead from local ad firm Yogg was your first intern. Who else in Richmond have you worked with or taught?

SS: I don’t take any credit for Adam (laughs). I help them a little bit, I try to keep them on course, but a lot of the time the best thing to do is get out of their way. These are people who are going to be doing great things, so I don’t want to mess things up that way. I’ve been here long enough that I see students, run into students who’ll stop by again, or I’ll see them in the news and, boy, I’m proud as ever. But I don’t take much credit for it.

RBS: What was your reaction when you learned you were getting the Mike Hughes Ad Person of the Year award at this year’s Richmond Show?

SS: I cried. It was really cool. It was neat that a lot of students or alumni had things to do with it. It was overwhelming, because I certainly haven’t done anything remarkable like many of the people who are on the list. But I think it kind of gave a nod to VCU’s role in the ad community in Richmond, and it gave a nod to the success of our students and alumni and the neat things that they are all doing. 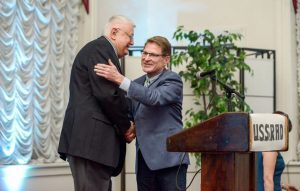 RBS: What did you say in your acceptance speech?

SS: I talked about what I would like to see in the Richmond ad community in the near future. The Richmond ad business has been really good to me. It not only put a roof over my head and clothes on my back and food on the table, but it’s a fun ride, and what makes it that is the people in it – good, wonderful people who are trying to do new, interesting things and keep business going, or keep the world a better place, because it’s not just all about business.

For that, it’s the weirdos, the diverse people, the nerds, those people. I think we need to grow that a little bit more, celebrate it. And really, we wield a lot of power – the power of communications. People who can do that well, a lot of times, are not the smartest guy at the table but the one who can communicate better. If we can really harness that to make the world a better place, or Richmond a better place, that’s pretty cool.

RBS: We’ve heard from Kelly O’Keefe and Don Just at the Brandcenter about how they think Richmond’s ad scene could, and should, be more than it is today. What do you see that could use improvement?

SS: If you took a snapshot of the ad club event, or look at the ad community as a whole, it’s a bunch of white folks. You lay that over the Richmond community, and we’re not a bunch of white folks. And if you look at what are the cool things happening in culture, which advertising uses a lot of, it’s the people on the fringes who are making some of the interesting things. Think about what that could be. I think there are some growth opportunities in that.

People who are pushing technology and art and culture in new interesting ways, they might be leaving Richmond. I think Richmond does a really good job of (keeping people here); I think per capita we have it better going on than a lot of places. But I think we have room to grow.

RBS: Describe your creative process. How do you keep a fresh approach and an open mind to things? What do you convey to your students to help them capture that?

SS: When I was working and starting out…I knew what creativity sort of was, and I had heard of the creative process, but it was vague. I didn’t really “have it.” …When I had to supervise others and give people creative direction, it was a very different animal. To me, it was an internal thing, and I didn’t know how to get it out of somebody else, so I had to do a lot of work and study on it. I’ve taken that even further in my classes, to really learn about the creative process and how to inspire other people and to simplify that into a way that the students can go, “Oh: 1, 2, 3, 4, 5,” as opposed to this vague thing.

In the creative process, the first step is information input. I knew before I was aware of that that I really like to do research on the project, the client, the category, the consumer, and look for ways to look at it differently. There’s the incubation stage, and the next one is to prepare. I knew when I did my best, if I had a creative project, I’d clear my desk, I’d do these organization things, but I didn’t really know that that was part of the process. And then, the “go” stage: idea-generation.

When it’s idea-generation, quantity makes quality – just flowing out ideas; dogged determination – where I’m not that creative; I just keep pounding away at it.

RBS: Are there sources of inspiration you rely on to get your creative juices flowing?

SS: Depending on my project, I do have a go-to list. I like the storytelling that Goodby, Silverstein (& Partners) does out of San Francisco. They’re beautiful storytellers and do more traditional TV spots. Crispin Porter (+ Bogusky), I like how they do things very unexpected but smart strategically. Illustration work, a guy named Guy Billout. His work is very simple, tells a story and has this interesting perspective all the time. I just love seeing how he turns something on its ear. Keith Jarrett is a jazz pianist, and (jazz pianist) Oscar Peterson I love – the simplicity of Oscar Peterson. Keith Jarrett, he improvises – he’ll have a whole concert where he just improvises. Dave Brubeck. I just love the simplicity of their music.

RBS: If you could ask any person one question, who would that person be and what question would you ask?

SS: I’d like to have a class reunion with everybody who I took a class with and just hang out with them and bounce around and talk with them. “Now that you’ve been out 10 years, what do we do well? What should we have done better? What suggestions do you have for us?” That would be cool – seeing what they’ve done, hearing their story, getting advice from them.