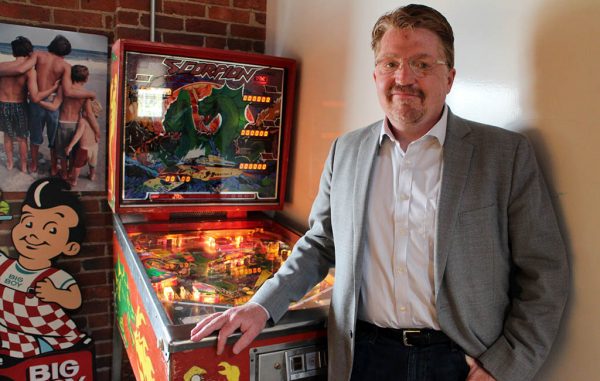 Kelly O’Keefe in his office at the VCU Brandcenter. (Jonathan Spiers)

Of the memorabilia and keepsakes that adorn Kelly O’Keefe’s office in the VCU Brandcenter, the largest among them blinks in a corner: a circa 1980 Scorpion pinball machine.

O’Keefe has held onto it since he put it in his first agency, O’Keefe Marketing, which drew national recognition and awards in the 1990s, including being named Southeast Agency of the Year by AdWeek Southeast.

In the two decades since, O’Keefe – professor and head of the graduate school’s creative brand management track – has developed a national reputation as an expert in the fields of marketing and branding – organizational branding, specifically.

A Richmonder since 1984, the Detroit native has steered the branding projects of corporate powerhouses such as Capital One and Walmart, as well as local nonprofits such as the Richmond Symphony and OutRVA. He’s been involved in such projects as the “RVA” brand campaign and recent work has included EarthCraft Virginia’s rebrand as Viridiant, as well as Dominion Resources’ planned rebranding as Dominion Energy.

Last year, O’Keefe stepped away from his role as chief creative strategy officer for the firm now known as Padilla, where he’d been involved since it acquired a later agency of his, O’Keefe Brands, in 2012. Wanting to focus on his work at the Brandcenter, he orchestrated his exit after helping to facilitate the firm’s acquisition of local branding startup Joe Smith. Or as O’Keefe put it: “I hired my own replacements.”

O’Keefe sat down with Richmond BizSense to talk about his approach to branding, the one question he always asks when working with a client, and the “colossal failure” that forever changed his professional outlook and perspective of his industry. The following is an edited transcript:

Richmond BizSense: You’re heavily involved in the Brandcenter, but you still do corporate branding work on the side. Describe your recent work for Dominion Resources, rebranding to Dominion Energy.

Kelly O’Keefe: I’m fortunate to work with brands all over the country from time to time on thorny strategic challenges, and certainly that was a complex one. It’s a very big company, it has over 100 subsidiary divisions, and you want to make sure that you’re doing work that is helping the company move forward.

The big solution that we just implemented is to go to one brand across the whole company, which had been made up of many, many brands. Now, they have unified under one brand, which is really key for us to be able to see them as one large company. And we updated to a more timeless identity – something that looks fresher, more forward-thinking, more innovative.

RBS: Describe your creative process. When you’re presented with this type of project, what’s your starting point?

I always start all of my projects with research into what’s going on inside the organization: what they do, what they’re proudest of, where their aspirations are, where they’re going. And then I talk to outside partners: the consumers, stock analysts – whoever we want to talk to who has an opinion of this company, to understand what the current opinions are. It always starts with deep research.

RBS: You mentioned your work doesn’t always result in a rebrand. Have you ever had a project that was the one that got away, where maybe the meeting of the minds just didn’t happen? 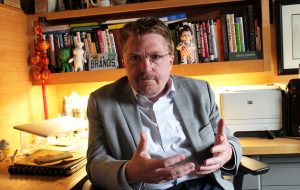 KO: I had what I consider to be a colossal failure that in many ways helped me understand where I wanted to go with my own work. It was a company, Office Furniture USA, which is a large middle market company. We launched an ad campaign for them and spent $3 million launching this ad campaign, and we had very little impact on the brand. I was just devastated to see that we had done everything right in my opinion – TV ads, social, online – and yet, we didn’t really move the needle much for the brand.

The client really should have fired us, but instead, I ended up working with their CEO at the time, Gary Kitchen, to understand why it hadn’t worked. The more research we did to try and figure out what was going on, the more I learned that it wasn’t really the advertising that was going to make the difference for this brand. What we had to work on was the experience at the dealership, the pricing of the product, the delivery standards, the values behind what they did and why they did it. When we started to work on those things, the actual physical experience, we had an impact.

For me, it’s when I started to understand that there was a lot more to branding than advertising. There are a lot more tools that we could use to change the way the customers thought about us than ads, and I wanted to go deeper and work with senior management to solve the problem.

RBS: Your Brandcenter colleague, Don Just, shared some interesting perspectives with us last year on Richmond’s creative scene and its perhaps-unmet potential. What’s your opinion of the local ad scene? Do you think it’s strong? Could it be more?

KO: I think there’s the good and bad. When I talk about the creativity in Richmond, I think that is thriving right now. Talking broadly, we’re seeing design firms and architecture firms and restaurants and fine artists moving to this area and doing amazing things. And there’s nothing I think more encouraging for Richmond than the rise of the creative class here. It’s been exceptional.

As it relates to the advertising agency community, I think there are a lot of great firms here. What we haven’t seen is a lot of really big firms emerge along the lines of The Martin Agency. I’m not sure that’s as important as seeing a lot of great firms emerge, because what we’re seeing in the world of creative as a whole and the world of innovation is that big firms, really big companies, aren’t where great creativity is happening. They’re happening in little garages and little outposts and 10-person firms. That’s where we’re seeing sparks of great excitement.

In the Richmond advertising community, you have firms like that. Elevation is doing great work right now. Certainly Cabell Harris and Work Labs is doing best-of-class work. We’re seeing a rise in the quality of work at ndp, under Danny Fell, and little places like 93 Octane. So from my perspective, it’s becoming more of a creative community. It’s not giant creative businesses like The Martin Agency that are going to drive the industry tomorrow; it’s going to be 50 small ones that are each doing something new and innovative and fresh and serving people who need that service. It’s what attracted to me to Joe Smith: they had really created a very formidable company in a handful of years.

While I think we haven’t met the promise or the hope that we would see other giants like The Martin Agency emerge, we may actually be better off as a result of that. Around the country, giant agencies are struggling a little bit, while younger, more innovative firms are thriving, and I think we’re experiencing that in Richmond.

RBS: We’ve seen Martin undergoing some changes as of late, such as reducing its staff and closing its New York office. What do larger firms like Martin need to do moving forward?

KO: I think larger organizations of all kinds, certainly in the agency world, do need to reinvent themselves. I think this is underway even at The Martin Agency. The way we go to market with brands is dramatically different than it was 20 years ago. We’re not just buying 30-second TV spots and running them; we’re building brands in deeper and more profound ways.

Agencies of the future that are going to thrive are going to be those involved in those aspects of experience design and environmental design and product design that are fundamental to how the products are made and where the employee comes to work every day, and not just window dressing like advertising. We’re seeing a big change, and the larger companies are forced to reevaluate and rethink. I think the good ones will get there, and I consider The Martin Agency to be a great firm. They’ve got great people, and I know they’re well on their way to transitioning to a more nimble and more powerful entity.

The Brandcenter has evolved as well. We started as the Adcenter, and we recognized we were doing deeper things and more focused on brands. I think that all of us here are on a mission to make this industry that we serve one that is a positive force in culture, and it’s not that right now. If we look at the least-admired professions in the world, advertising always falls on that list. We’re always toward the bottom of the list in Gallups’ least ethical professions poll, and I think we should be ashamed of that. I don’t think we should accept that.

When we are at our best, we are helping businesses and causes and communities to find ways to voice what they do best in a way that generates more engagement, more interest, that creates more support for causes, that changes people’s minds. When we’re at our best, we’re helping people understand each other.