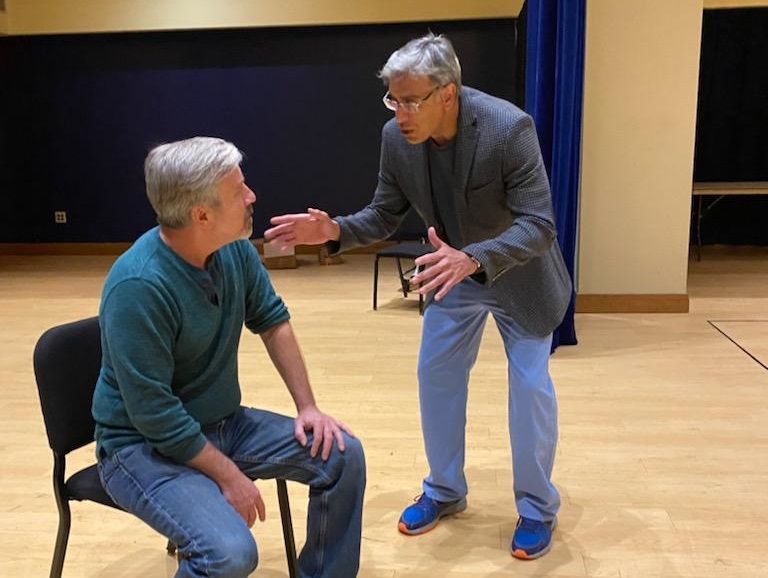 Dr. Charles Joyner, right, during a rehearsal for ‘Chaos of Spirit,’ which opens this week at Dominion Energy Center’s Gottwald Playhouse. (Photo courtesy of Joyce Slater)

In a lot of ways, Dr. Charles Joyner has been preparing for this role his whole life.

A cardiologist with Virginia Cardiovascular Specialists, Joyner’s not only a doctor, he’s also playing one on stage. He’s making his acting debut in a locally produced play, “Chaos of Spirit,” which opens this week.

Officially a cardiac electrophysiologist, Joyner’s specialty is managing electrical problems with the heart, such as slow or fast heartbeat issues, fitting pacemakers and defibrillators, and performing procedures called ablations to treat atrial fibrillation.

While his day job deals with electricity in the heart, Joyner said it’s the electricity of live performance that’s been filling his own heart of late.

“Learning the lines, trying to interpret the character and just learning that thing that is so natural for stage actors — that playing off each other and working off each other’s energies and cues and stage places — were things that I had to pick up,” Joyner said. “I think I finally got it, thank God, now that we’re almost upon the performance here.”

Joyner’s path to the stage also followed his experience with another type of performance: live music. Initially working backstage as a sound engineer at a venue while attending Yale as an undergrad, the D.C. native has since been involved in live music production off and on for decades. 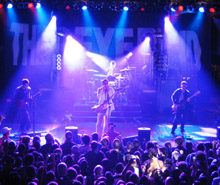 In Richmond, where he attended medical school at MCV, now the VCU School of Medicine, Joyner served as a silent investor in several shows that were put on at Brown’s Island. He was also the mastermind behind Toad’s Place, a short-lived music venue at the Lady Byrd Hat building that brought concert-goers to the Canal Walk from 2007 to 2009.

Joyner said those experiences prepared him for the stage and gave him a love for live performance.

“I’ve been around it for a long time, and I know a whole lot of what goes on leading up to a show and booking a show and producing a show. When you do that, you do have an appreciation for all kinds of live performance and how to do it right,” he said.

Joyner said he had never aspired to act but fell into it while flipping through the Nextdoor app on his phone. There he saw an ad from Bruce Slater — the play’s writer, director and co-producer — seeking people who could fill roles that remained vacant, including, Joyner said, “a physician in his 50s or 60s.”

“I just laughed at myself,” he said. “I was like, ‘Uh, I am a 56-year-old physician, I could probably pull that off.’ I couldn’t stop thinking about it over the next couple of minutes and just thought I could really solve this gentleman’s problem and maybe get his play off the ground if I just said yes.

“I sent him a message and said, ‘I have no acting experience, but I am a physician, 56 years old, and maybe I can solve that problem for you.’ I assumed he would do some sort of read-through and probably say, ‘Thanks for coming but we’re going to get someone else.’”

While his medical commitments kept him from meeting with Slater for an audition, Joyner said it was a series of videos he’d posted on YouTube explaining atrial fibrillation ablations that landed him the part.

“I was on call that weekend, and I just never could get out of the hospital in time,” Joyner recalled. “On Sunday, he said, ‘Don’t worry, I just saw a bunch of your YouTube educational videos and I think you’ll be just fine.’” 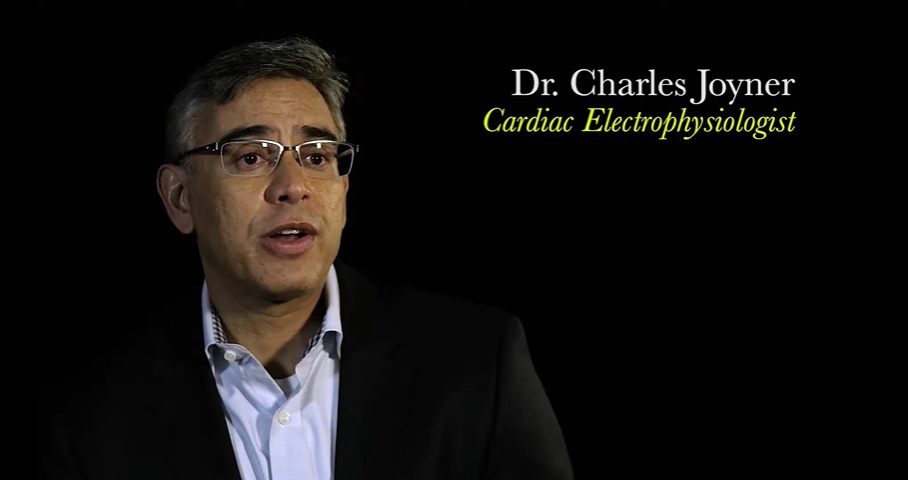 Joyner in one of his educational videos that helped land him a role in the play. (Screenshot)

Joyner credits those videos as another step toward performance, as well as a men’s coaching podcast he co-hosts with friend Zach Butler. They recorded 15 episodes of the podcast, called “Twisted Wisdom,” at In Your Ear Studios about a year ago and are working to line up sponsorships for more episodes.

Of his videos, he added, “When people asked for videos to be done, I never shied away from it, because I had been behind cameras and on the other side of it for so long that it was very comfortable for me to do that. There must be some kind of carry-over with that and me being on stage.”

In “Chaos of Spirit,” Joyner plays Dr. Levison, a role that he said allowed him to exercise doctor muscles he doesn’t get to in his day-to-day routine.

“It’s a family and a community going through a roller-coaster of emotions and questions surrounding an untimely death of a young person,” he said of the play’s plot.

“In this role as Dr. Levison and the way that I serve this particular family at this time of crisis, I actually bring what I think is the best part of being a doctor to that interaction, which is not how I go in and cut-and-sew or fix a problem, but just the human element of sitting down and understanding, empathizing what they’re going through, which is as important to being a doctor as anything else,” he said.

“Sometimes that gets lost in the shuffle.” 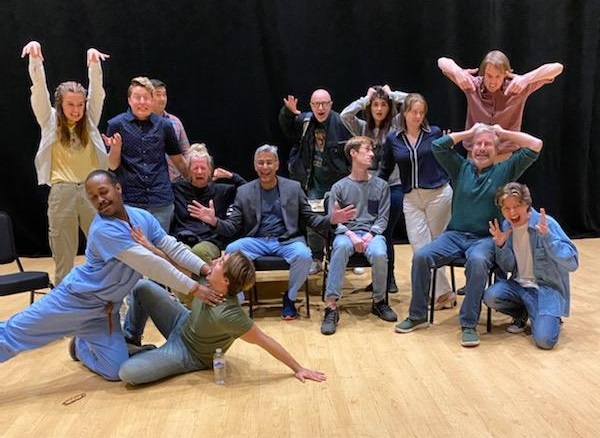 The ‘Chaos of Spirit’ cast hamming it up. (Photo courtesy of Joyce Slater)

One of 14 actors in the cast, Joyner will be performing “Chaos of Spirit” May 4-8 at Dominion Energy Center’s Gottwald Playhouse. The show is presented by Slater Theatre Productions, the husband-and-wife team of Bruce and Joyce Slater.

When he takes the stage before his first live audience at Wednesday’s opening night, Joyner will be further fulfilling a creative side that he said his day job has kept at bay.

“A lot of people in my position get so busy with what they do during the day that they’ve got a lot of guardrails and blinders up and they can’t express their creativity at all,” he said. “Many of us, especially physicians — scientific-types, engineer-types, analytical-types — can have a creative side that they don’t get a chance to express, and I think I’ve learned more and more how important it is to use that side of my brain.”

Asked if he’s planning to return the stage after “Chaos of Spirit” closes, Joyner said, “If I can find the eighth day of the week, I would be glad to do more of these. I will say it’s been more than I ever expected, and I just love collaborative efforts with very dedicated and energized people. You don’t get a lot of lazy people on stage. Everybody is pushing along to make one thing happen.”

He added, “This kind of a group, they’re so supportive, and I think they all enjoyed the chance to go up on stage and make something happen and have an impact on people. I’m not around that kind of energy much, so it’s been very interesting. I’m going to miss it when it’s done.”

This is the latest installment in our Downtime series, which focuses on business people’s pursuits outside of the office. If you, a coworker or someone you know around town has a unique way of passing time off the clock, submit suggestions to [email protected] For previous installments of Downtime, click here.