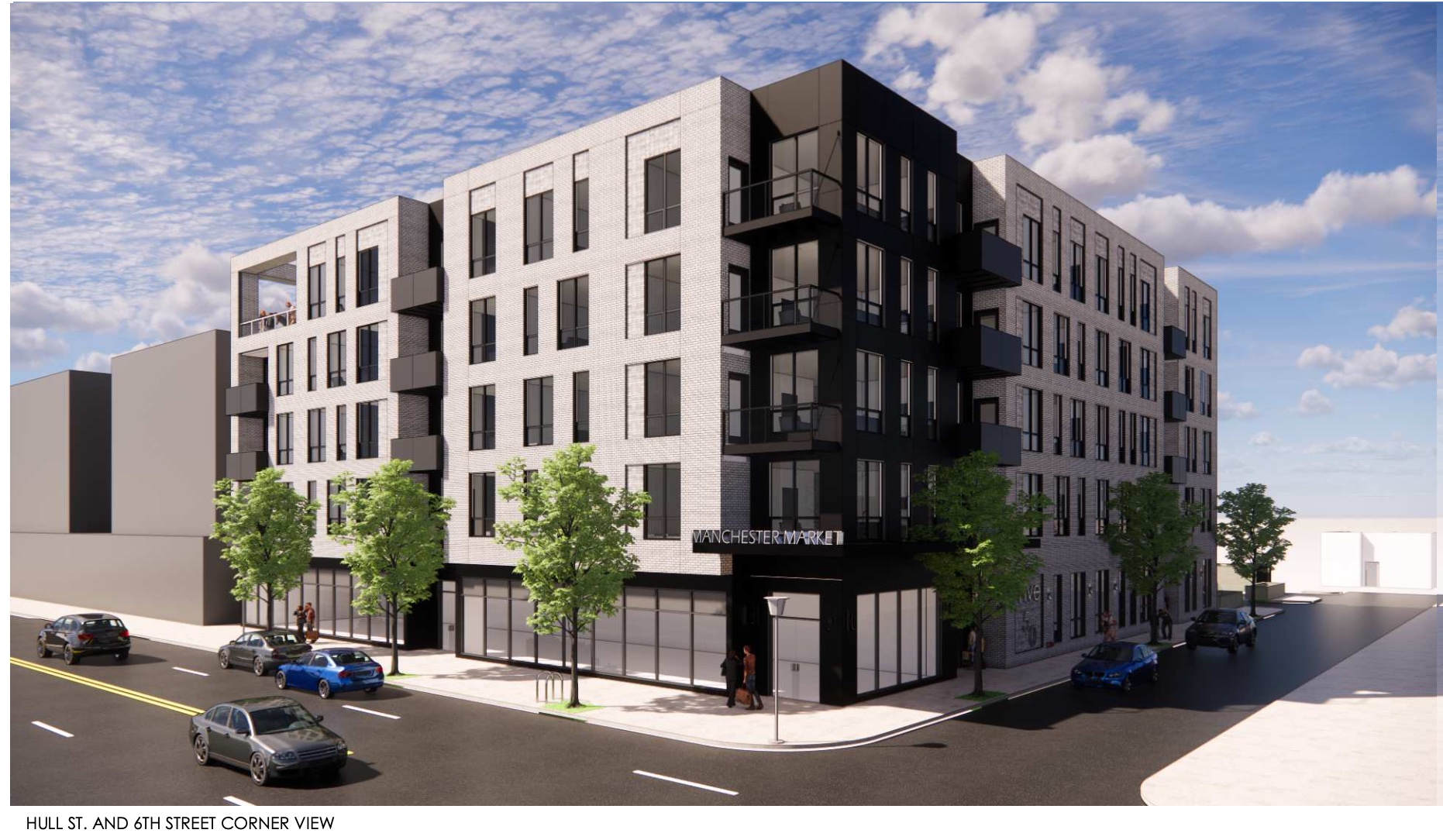 The new mixed-use building planned for 512 Hull St. is set to be less than half the height of the initially-planned 12-story tower. (City documents)

Five years later and with seven fewer stories on the drawing board, a long-planned Manchester project is set to get underway.

Developers Sam McDonald and Mark Scordo are preparing to break ground on a five-story mixed-use building at 512 Hull St. The 65-unit building will rise next door to their neighboring 102-unit PortRVA at 500 Hull St.

The new mid-rise project marks a significant reduction in size from the 12-story, 188-unit tower McDonald and Scordo had initially proposed for the site beginning in 2017.

McDonald said they had plans drawn up and paid for and were getting ready to break ground on that larger version when the pandemic hit in early 2020.

“COVID killed the bigger building. When COVID happened, bankers changed their requirements for equity, reserves and loan ratios,” McDonald said. “So, we couldn’t do the bigger building anymore. We thought we were ready to go, then the bank said, ‘Wait a minute.’”

In order to make the numbers work for the 12-story tower, McDonald said they’d have had to sell equity in the project, something they didn’t want to have to do.

“Now doing a five-story building and keeping the ownership … it made sense for us to do that instead of raising equity,” McDonald said. 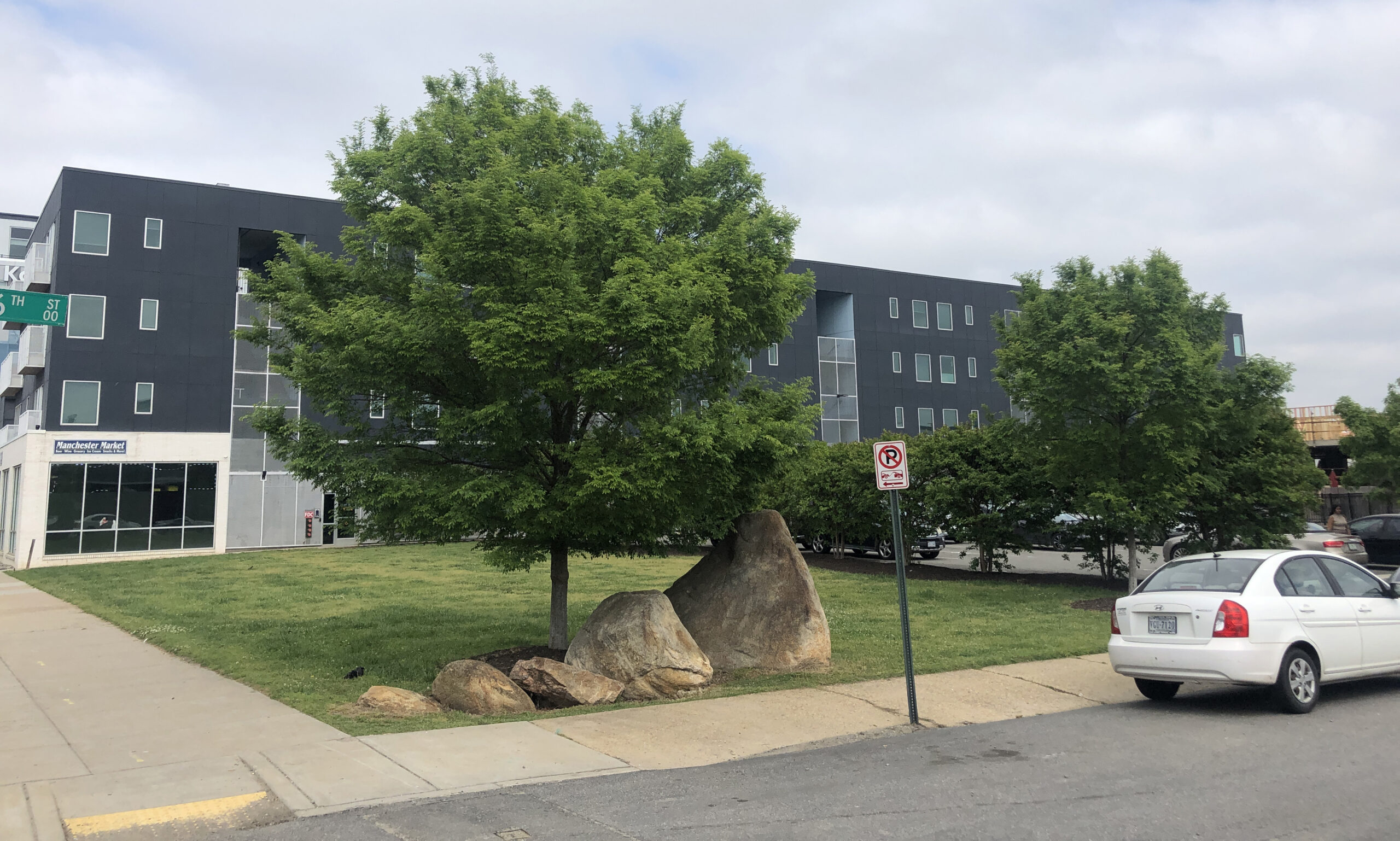 The site is primarily a parking lot and includes some greenspace. (Mike Platania photo)

The new project was initially billed as a second phase to PortRVA, though McDonald said it doesn’t yet have a name.

Plans for the new building call for 65 units across 54,000 square feet, with 51 of those apartments being one-bedroom units, six as lofts and eight as studios. Amenities include a pool, roof deck and fitness center, as well as 29 parking spaces.

About 3,000 square feet of commercial space will face Hull Street. McDonald said they’ll begin marketing that space as construction progresses and that all options are on the table for the type of commercial tenant.

“A couple years ago I’d have said only office but now there’s a lot of possibilities,” he said.

SMBW is the project’s architect, UrbanCore Construction the general contractor and Parker Design Group the engineer. South State Bank is the lender. McDonald declined to disclose the project’s cost.

Another project on the block is already well underway. To the east of McDonald and Scordo’s site is The Box, Tom Papa’s seven-story, 118-unit apartment building at 501 Decatur St. After a below-ground parking deck was dug late last year, construction on The Box began going vertical in early 2022.

It’s difficult to beat this corridor along Hull Street as the canyon of apartments and businesses continues to evolve from the bridge to Commerce. The location is great and amenities are finding their way to serve the huge new population. I’m glad to see Property Results build out the last bit of their acreage there to complement the very successful Phase 1 of PortRVA.