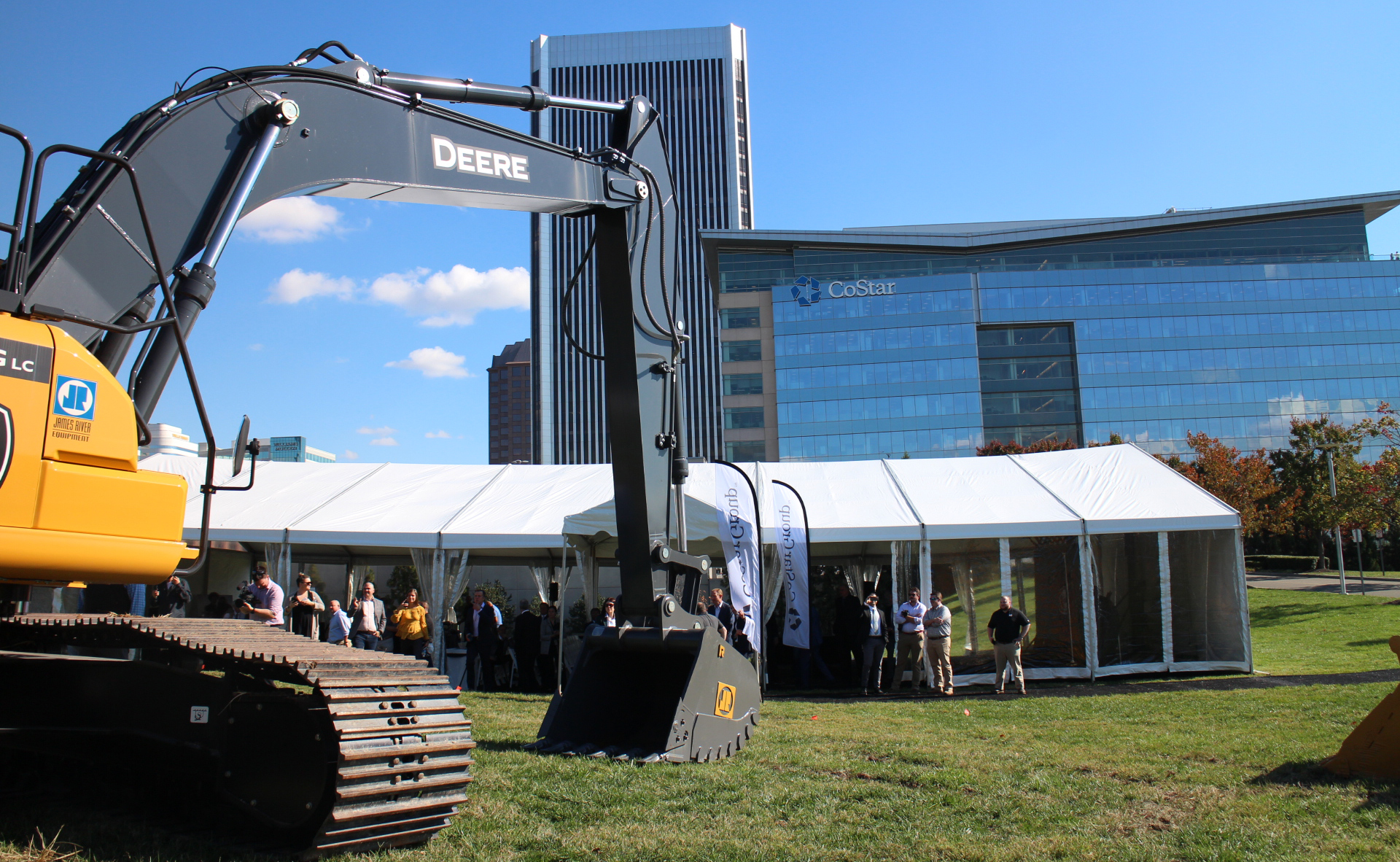 Work on a nearly half-billion dollar riverfront development got ceremoniously underway on Tuesday.

The campus will include a 26-story office tower and a six-story multipurpose building near Brown’s Island. Spanning 750,000 square feet, the complex will rise on a four-acre grassy area that the D.C.-based real estate data firm bought in 2020 for $20 million.

The new buildings will be adjacent to CoStar’s current local office building at 501 S. 5th St., which it moved into in 2016 and bought last year for $130 million.

Connecticut-based Pickard Chilton is the project’s architect, and Whiting-Turner Contracting Co. is the general contractor.

CoStar announced its plans for the campus last year, along with its intention to hire an additional 2,000 employees to work in the new building. Founder and CEO Andy Florance said Tuesday the company currently has 1,500 employees in Richmond and 5,300 companywide. 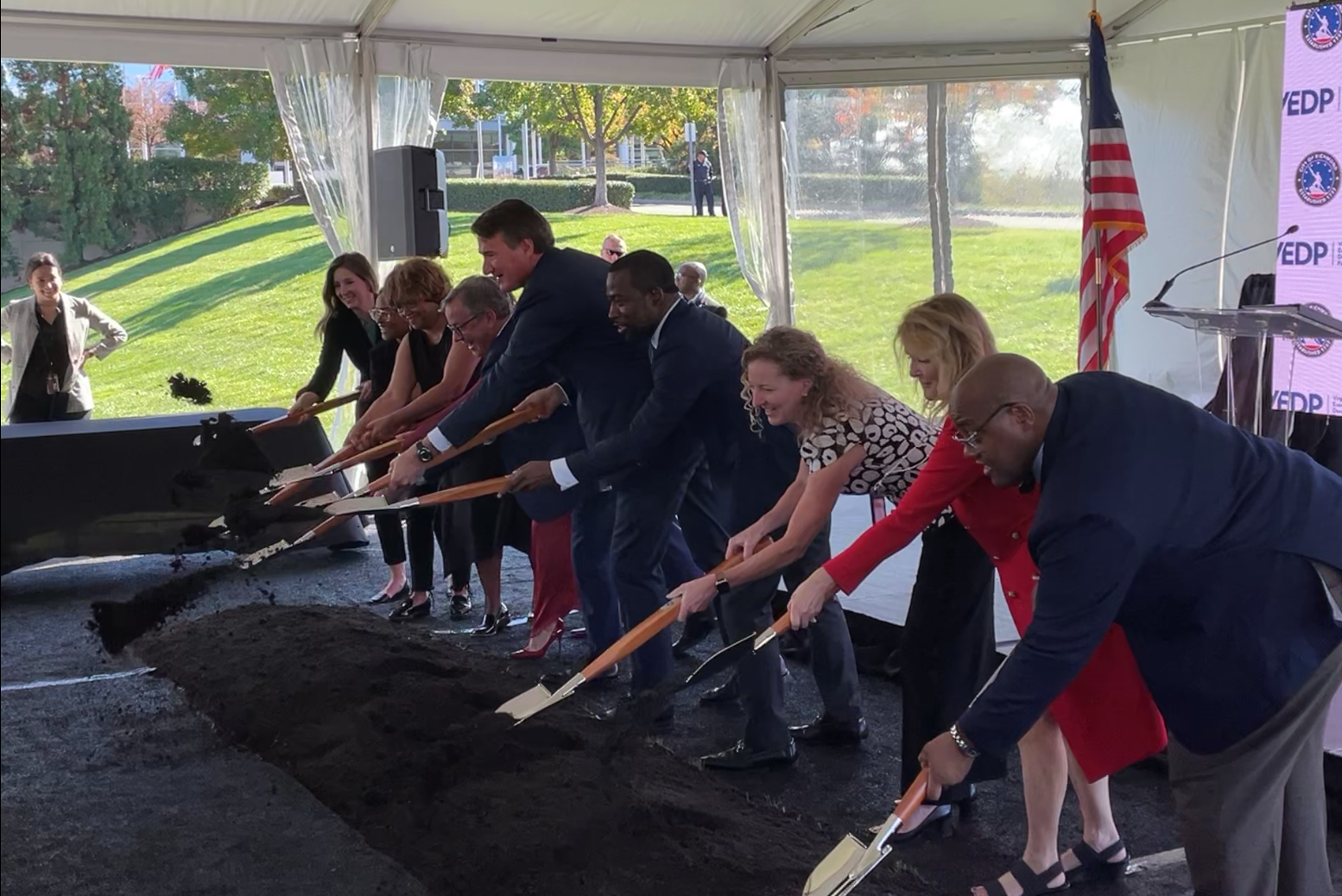 A ceremonial turning of the dirt was held on the future complex’s site Tuesday. (Michael Schwartz photo)

Once completed, CoStar’s building will be the highest above sea level in Richmond, and it might become the tallest if the James Monroe Building winds up getting demolished as the state prepares to replace it.

Florance said Tuesday’s event was “One shovel in the ground for coming back together, working together and being more productive,” referencing the company’s goal to have its employees back in the office.

Public-facing entertainment spaces are also part of the plan for the new complex. The six-story multipurpose building will have room for restaurants, for which Florance said they’re “going to seek our great culinary partners in the city.”

The project will also include an amphitheater that Florance said will be a good bit smaller than the one being planned just down the street by a group led by Coran Capshaw.

“Our amphitheater is more modest than the one over there. Ours is 400 to 500 (seats),” Florance said. “We’ll do smaller, more intimate (events).” The Capshaw venue would have a capacity of 7,500. 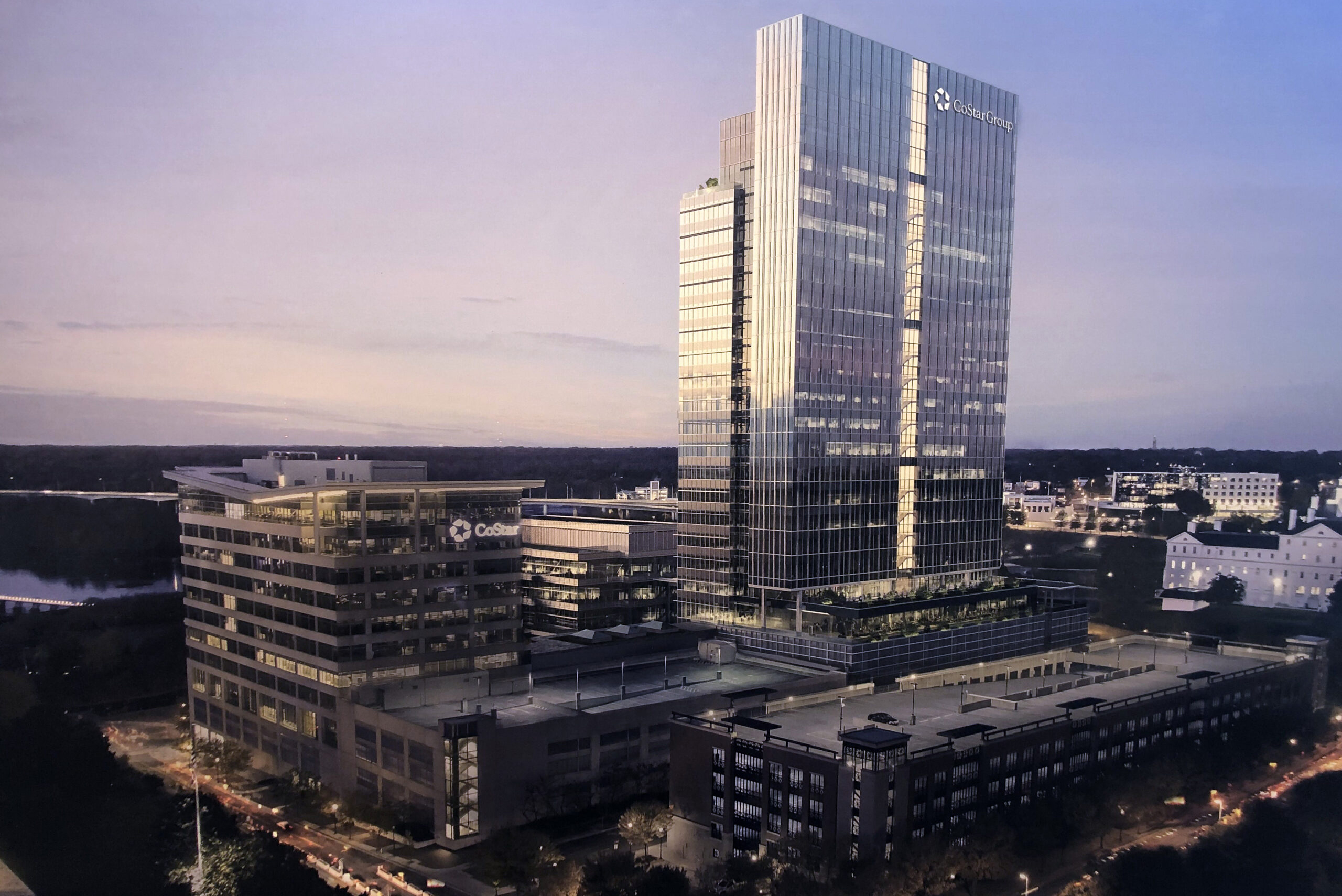 A rendering of the new CoStar complex. (Courtesy of CoStar)

As it waits for the new office tower to be built, CoStar also is working on new office space south of the river. Earlier this year it bought the former SunTrust Mortgage office building at 901 Semmes Ave. for $20 million. Florance said the company is in the process of renovating it as they look to move in in about a year.

He added that CoStar may eventually look to redevelop its Manchester land.

“Our thought is once we build this campus, we’ll probably redevelop (the SunTrust land) for housing. You can do some really wonderful housing there, unless we need more office space,” he said.

Aside from the sizable campus development and its deals for the Manchester and downtown office buildings, CoStar’s appetite for Richmond real estate may not yet be sated.

During his remarks to the crowd on Tuesday, Florance talked, seemingly in jest, about wanting to build second and third towers in Richmond after the first one’s completed.

Asked after the event just how serious he was about such an undertaking, Florance said, “We have to build the first one but yeah, we grew 25 percent this year in staff. I think we’ll fill the building.”

“I do have a map of the city up on the wall,” he said, laughing. “And I am looking at things that are parking lots that could be something else. But it’s over time.”

This is simply amazing. I’ve read and re-read this story more than a few times and I’m still trying to wrap my brain around just how HUGE a win for RVA CoStar is. It goes WAY beyond just a 26-story, 425-foot tall office tower that will be a signature building on the RVA skyline for generations: it’s about the POTENTIAL that Andy Florance sees in Richmond as one of the next up-and-coming cities and as a fantastic place for CoStar to plant a few flags and make some amazing things happen. I can hardly contain my excitement in thinking about… Read more »

If they plan to put affordable housing in Manchester, Florence had best get his checkbook out now. The lots are filling and the industrial spaces are being cleared for new apartments. He’ll find these properties for sale on Loopnet.com.

Very true, Bruce. One thought – and it would no doubt require Mr. Florance to really dig deep into the CoStar pockets – but if lots in Manchester are filling, CoStar should always have the option to GO VERTICAL! Yes, it would be more expensive to build – but – as many other cities have embraced – when it comes to limited land space, the sky’s the limit! Here’s hoping they’ll reach for the stars and go vertical with anything they build. (And I get the impression from the RBS article that Florance has a penchant for building big and… Read more »

Richmond has a lot to offer. We are more affordable than any of the cities you mention, and as CoStar was looking to move I’m sure the overall savings, as well as growth potential, was a big piece of that equation. I’m excited for the Diamond District and City Center. I’m hopeful we can make progress with the reimagining of Monument Avenue and get some stability and civic cooperation with our next police leader. I think with the right packaging our offerings are very compelling and don’t need too many additional incentives. Whether the CEO is a real estate mastermind,… Read more »

💯 !!! Agreed on all points, Boz. Well said. 👍 Indeed, RVA is a much more cost-friendly option for businesses looking to relocate, particularly companies who have been been looking to escape uber-high-cost areas such as NYC, D.C./NOVA, etc. Like you, I too am very excited to see what will happen in both the Diamond District and City Center.I’m particularly excited that the City Center has been rezoned to eliminate height restrictions on development – so perhaps as the economy shakes out better in the (hopefully near) future and as construction costs (hopefully) normalize – we could potentially see some… Read more »

That BIG shovel is one I could get behind! Let’s build that tower Andy!

“One shovel in the ground for coming back together, working together and being more productive,” referencing the company’s goal to have its employees back in the office.

I’m not surprised to hear that from the CEO of a commercial real estate company, but that attitude is going to make it very hard to hire and retain the best talent.

Richmond virginia Is Getting So Big