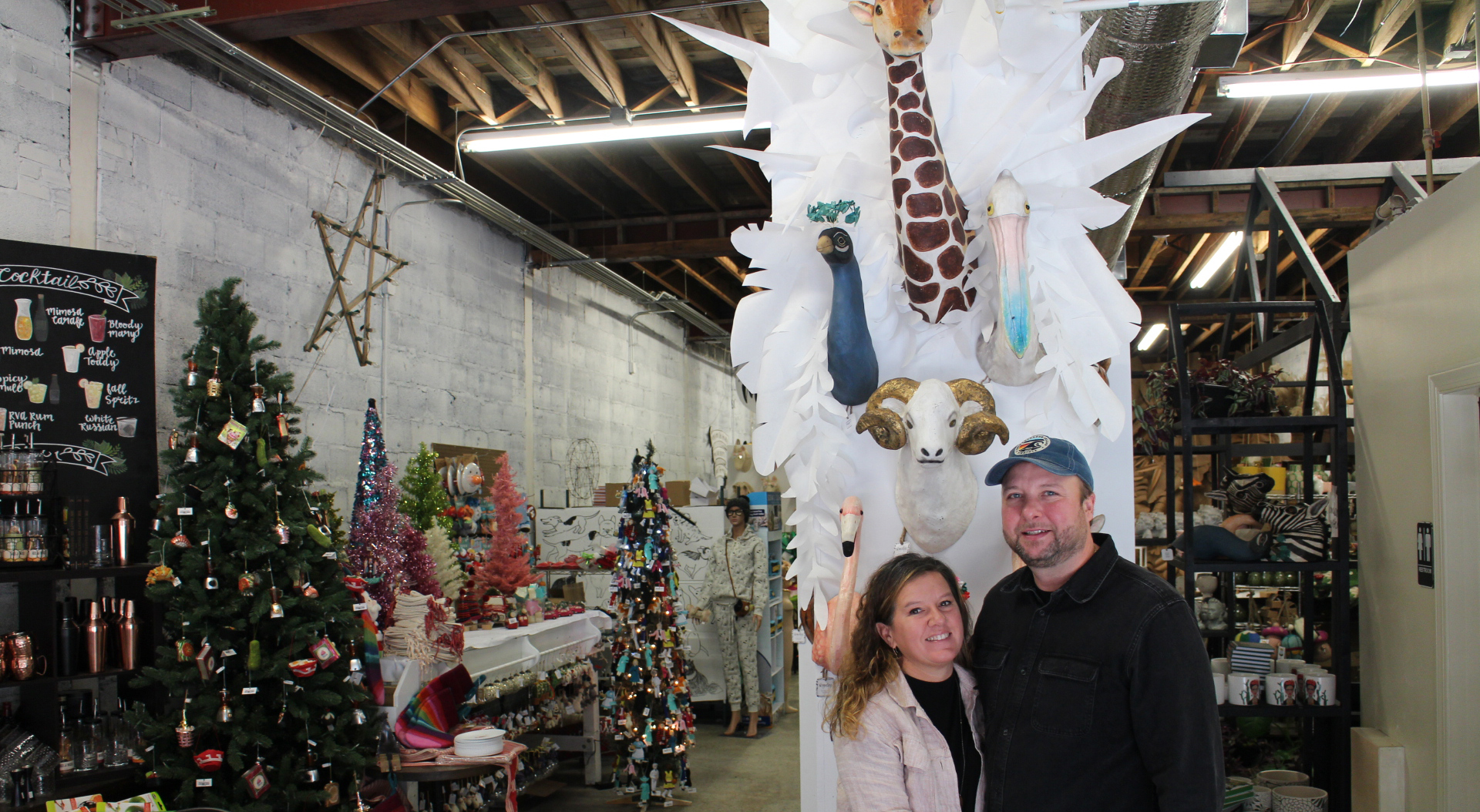 Nicole and Bryon Jessee in the future home of Shyndigz. (Mike Platania photos)

Nicole and Bryon Jessee are plotting the next move for their Fan confectionery.

The owners of Shyndigz are preparing to relocate the bakery and gift shop across the road from its current home at 1833 W. Cary St. to 1912 W. Cary St.

The married couple say they plan to make the move a gradual one, with an expected completion in mid-2023. But until then, they plan to use the new space as a pop-up holiday market that will open in the coming weeks.

Since launching Shyndigz as a sit-down cake restaurant in 2010, the Jessees have expanded and moved the business a few times. In 2014 they took it from the West End to 1903 W. Cary St., and later opened both Shyndigz Market & 2go Cafe and The Fancy Biscuit at 1831-1833 W. Cary St.

They also spent 2021 becoming their own landlords. As the Eck family sold off its extensive Fan real estate holdings, the Jessees jumped on the opportunity and bought the building and lot housing the Shyndigz market and Fancy Biscuit for $950,000, as well as 1912 W. Cary St. and the 0.3-acre parking lot next to it for $655,000. The Jessees also bought the Shyndigz restaurant building at 1903 W. Cary St. for $875,000, though the Ecks were not a seller in that deal.

Throughout the pandemic, the Jessees said, they gradually added more gift items to Shyndigz’s shelves. The current building isn’t big enough to house the extra merchandise as well as their signature cakes and sweets.

“The vision is that it’s the one-stop shop to any event you’re going to. You’re going to be able to get a great bottle of wine, a wonderful dessert and the perfect gift idea, and you don’t have to go to five different shops,” Bryon said of the new space. “It’s been a ton of work to figure it all out, but I think we’re close.”

The building had formerly been used as storage for the Ecks and is currently being decorated to become the holiday market. After the holiday market closes in January, the Jessees said they’ll look to begin heavy renovations, which will include adding garage doors and installing a trailer RV-turned coffee bar near the front door.

“We’re going to be pouring espresso and prosecco. The idea is to sip and shop,” Bryon said.

The 3,800-square-foot building had been used for storage by Eck Enterprises.

In addition to the added space for retail items, the Jessees said the space will also have a large showcase of Shyndigz’s baked goods.

“When you come in, you’re going to see a whole wall of cake,” Bryon said.

Johannas Design Group is designing the space. They haven’t yet selected a general contractor.

Nicole said they’re hoping to have the new location ready to open in June 2023 in time for Shyndigz’s 13th anniversary. Once open, the current Shyndigz Market & 2go Cafe at 1833 W. Cary St. will close.

The Jessees have also not reopened the Shyndigz restaurant at 1903 W. Cary St. since the pandemic, but they said they’re not ruling it out.

“It’s hard because it’s our flagship, it’s how we started,” Nicole said. “It breaks my heart to not think about opening it, but we have other things that we’re working on.”

They said they haven’t done so because they’ve been trying to look out for their staff of around 48 as well as trying to get The Fancy Biscuit’s numbers back up.

“We haven’t had the appetite to reopen the restaurant because of all the heartburn our leadership team has been going through,” Bryon said. “(And) with the Fancy Biscuit, thank God it’s doing well now, but this is the first month we’ve made money (there) since the pandemic. It’s been very challenging. So we’ve put a lot of our resources into that, to be honest.”

The Jessees also said Shyndigz, operating solely in a to-go manner, has been thriving. Bryon said business year-to-date is up 6 percent from the numbers Shyndigz did in 2019 with the restaurant.

Once the move is complete, the Jessees said they’ll start thinking about what to do with the restaurant, as well as the Shyndigz market space at 1833 W. Cary St.

“Who knows what that will be,” Nicole said, laughing. “We have no trouble coming up with new ideas.”

A great success story! One of the few places you can go out for deserts ONLY and be totally satisfied!

Love the place but how do you got “out” to place that is only open for to-go. I truly hope they re-open the restaurant space. The buzz and excitement (and closeness to other tables) was part of its charm.

I certainly enjoyed the restaurant but I kind of prefer getting their desserts to go.

I don’t eat sweets often, but they were certainly worth a splurge a couple times a year