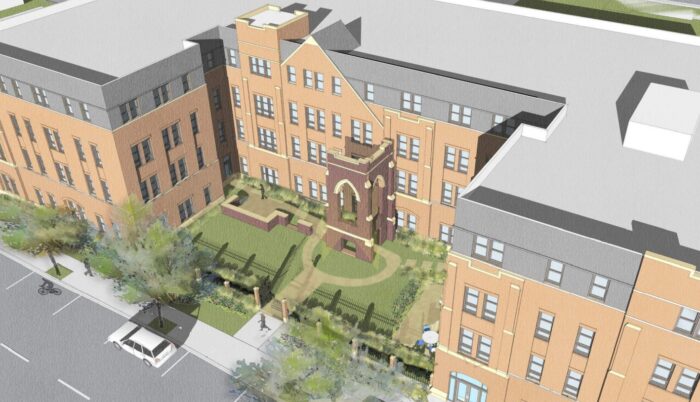 A rendering of the 66-unit apartment project on Brookland Park Boulevard shows how the existing church building facade would be worked into the structure. (File images courtesy Enterprise Community Development)

Site work is slated to start next month on an apartment development on Brookland Park Boulevard that’s been nearly a decade in the making.

Enterprise Community Development announced this week it has closed on its construction financing for its Brookland Park Apartments project, a 66-unit, $21 million project planned for the 1200 block of East Brookland Park Boulevard.

The nearly 1-acre site, just west of the Six Points area in Northside, includes the former Mizpah Presbyterian Church and Nehemiah House Community Center, the bulk of which are to be demolished. The façade of the church building is planned to be preserved and worked into the new structure.

Enterprise, a Baltimore-based developer that converted the nearby Highland Park Public School building into senior apartments, is planning a four-story structure with units ranging from one to three bedrooms. The apartments would be restricted to households earning between 40 and 60 percent of the area median income.

The company secured approvals for what was then planned as a 76-unit project in 2018. Matt Engel, senior director for real estate development at Enterprise, said the time since has been spent trying to secure financing for the project. 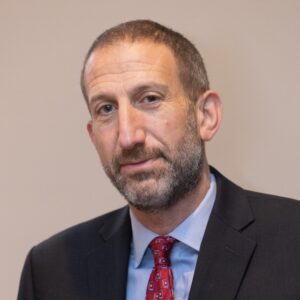 “We have been trying year after year to get the deal financed and to close the financing for construction,” Engel said. “We were finally able to do that this year.”

Other funding sources include the City of Richmond’s Affordable Housing Trust Fund, a construction loan from Truist Bank and a grant from Bank of America.

With the financing in place, Engel said development is set to start in February with demolition of the existing buildings on the site, with the church building façade to be preserved. He said construction is scheduled to last 18 months.

The apartments are to be built to U.S. Department of Energy Zero Energy Ready Homes and Enterprise Green Communities standards, the company said in its announcement. Seven units will be designed to Universal Design Standards, including two for vision- and hearing-impaired residents. 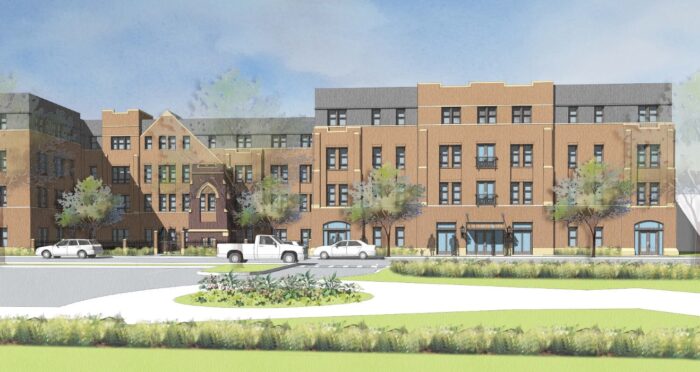 A street-view rendering of the four-story apartment building as it would appear along Brookland Park Boulevard.

While construction on the project gets going this year, Enterprise will also be working to secure financing for another project it’s planning right across the street: a 43-unit new-construction build with ground-floor commercial space at 1203 E. Brookland Park Blvd., next door to the Highland Park Senior Apartments.

That project would give the firm a trifecta in a neighborhood that’s been seeing development interest pick up in recent years.

“We always looked at that area as an opportunity for us to be a community developer, not just a transactional real estate developer,” Engel said. “When we bought that school, we sat there and looked at the edge of the property around the different sites in the neighborhood and realized we didn’t just want to do a one-off. We wanted to do something comprehensive.”

The Highland Park project was the first of three that Enterprise completed with the RRHA to provide replacement housing for residents of Gilpin Court’s Fay Towers. The other projects included a conversion of the former Baker Public School and a mixed-use development in Jackson Ward that includes the Van De Vyver apartments and The Rosa senior apartments.

Always amazed when you do the math on these deals that “low income” properties most of which are likely to be one bedroom units end up costing $320K per unit. I know construction materials are not cheap but there seems like there has to be a way to be able to build apartments cheaper than most high end new houses when you figure the cost per square ft?