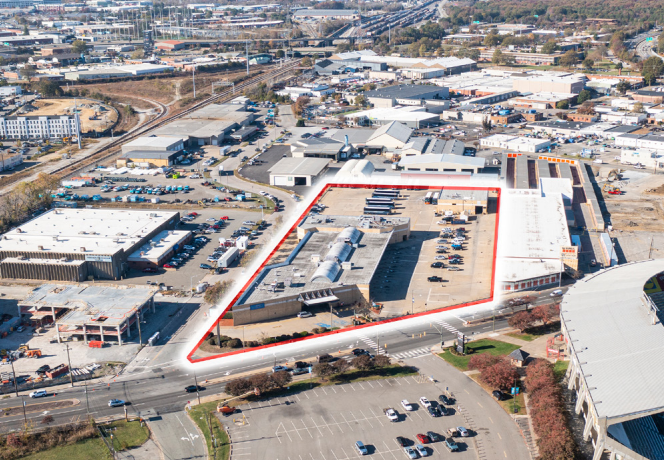 With the massive Diamond District development in the works across the street, the aging Greyhound bus station on Arthur Ashe Boulevard is getting some renewed attention.

But the new owner isn’t looking to hold onto the property for long.

Twenty Lake has already put the site up for sale as a redevelopment opportunity, according to a marketing flyer from listing broker Commonwealth Commercial.

It’s unclear what Twenty Lake paid for the property at 2910 N. Arthur Ashe Blvd., as the December sale is not reflected in the city’s property records.

The deal was confirmed by the seller, FirstGroup PLC, a U.K.-based firm that was formerly Greyhound’s parent company.

FirstGroup sold the Greyhound business to German-based FlixMobility in the fall of 2021, but held onto Greyhound’s U.S. real estate. Last September, FirstGroup announced it was planning to sell all the Greyhound real estate to Twenty Lake for a total of $140 million. The exact number of properties sold and individual sale prices were not disclosed by FirstGroup.

The Richmond Greyhound property was most recently assessed by the city at $9.1 million and is zoned TOD-1 Transit-Oriented Nodal district, which allows for up to 12 stories and a mix of uses.

The two buildings on the property – a 42,000-square-foot bus terminal and an 8,000-square-foot garage – account for $4.7 million of that value. The land makes up the remaining $4.4 million assessment.

Commonwealth Commercial’s Jim McVey, who’s handling the listing with colleagues Michael Morris and Thomas Lynde, said they’re in the process of reviewing offers for the land.

Greyhound continues to operate there, but McVey said he doesn’t anticipate the company will be there long-term.

A Greyhound spokesperson said they have “no new information on any Richmond station changes.” 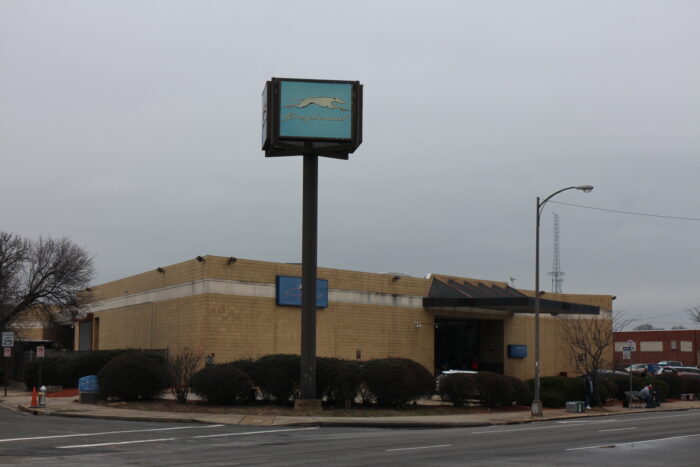 The bus station continues to operate on the site, but it’s unclear for how long it’ll continue to be there. (Mike Platania photo)

The Greyhound property is surrounded by current and upcoming development.

Right across the street is the  67-acre Diamond District project that’s scheduled to begin this year. To the south is Novel Scott’s Addition, a 272-unit apartment project from Thalhimer Realty Partners and Crescent Communities that’s currently going vertical at 2902 N. Arthur Ashe Blvd.

Farther down the block Thalhimer also recently began work on Scott’s Walk, a retail and restaurant project at 3064 N. Arthur Ashe Blvd., as well as a seven-story mixed-use apartment building at 1801 Ellen Road.

Future infrastructure may also land near the Greyhound parcel, as the city’s Richmond 300 master plan outlines the rear of the Greyhound property as a site for a pedestrian and bicycle bridge that would go over the train tracks and connect to MacTavish Avenue in Scott’s Addition’s historic district.

Though a rare occurrence, real estate can sometimes change hands without recording in public documents, namely when it’s included in corporate acquisitions or portfolio sales.

Another local example is the former TForce headquarters at 1000 Semmes Ave. in Manchester that’s set to hit the market. The Canadian trucking firm came into owning the nearly 7 acres when it acquired all of UPS Freight in 2021. UPS Freight, too, took on the land when it acquired Overnite Transportation in 2005, yet city records still show Overnite as the land’s owner, despite Overnite not existing for more than 15 years.

Congrats to Jim McVeys team for winning this very attractive listing. Commonwealth Commercial has really grown in size and it’s reach over the last decade as a homegrown competitor to the national brokerages.

I know making a bus terminal for all bus lines was thrown around as part of Main Street station at one point, but I don’t know what ever happened to it. I think a central spot for bus traffic, kind of like an airport, would be beneficial to the bus lines, the public and businesses near it.

Now is the time to strike, you’d have Amtrak, Greyhound and GRTC’s Pulse service all in one hub.

It will be 2025-26 before more than 7 trains go downtown; are your recommending a fifth rail station in the area? Ashland, Staples Mill, Main Street, Ettirck-Petersburg….I can’t see them building another station and final track improvements are years and years off

A fifth rail station? No! Not at all. Where are you coming up with that? Absolutely no one is suggesting any additional rail stations be constructed. Relocating Greyhound to Main Street Station – or to a new BUS station immediately adjacent to MSS – would not involve building any new rail stations. Rather, it would fulfill a decades-long plan that the city has included in multiple versions of the master plan to create a multi-modal transit hub at Main Street Station, combining Amtrak, Greyhound, GRTC local and express service (express to/from the airport, for example) in one central location on… Read more »

That would have been nice the but mult-modal Main Street Station is dead for the near term. And yes some are still pushing at new station in/near the Diamond district. Main Street as a multimodal died in the Jones administration when they and GRTC determined buses in and out on the roads would not work (and no I think that was smoke) and GRTC’s central transfer station is going in a 8th and Clay is expected to be used for 3-4 years. Maybe in 2030-35 when all the rail improvements between DC and RVA are done (and we see 10-12… Read more »

It wouldn’t have to be just Greyhound either. Like an airport you could have loading areas for MegaBus and the other lines.

MegaBus is already at Main Street Station….. and I agree, a central hub is ideal, especially in the absence of an east-west train to Charlottesville.

Megabus uses the public parking lot across from Main Street station. The Main Street Plaza. Why the City did not work to do a bus loop instead of surface parking lot around the back side of the 15th & Franklin parking deck one will never know.

The removal of the Greyhound Bus terminal will be an added plus for the continued re-development of Scotts Addition. This property is the largest remaining eyesore in the area.

The question to be answered is whether or not Greyhound will remain in Richmond. If the answer is YES, the next question is where?

I mean you would not want LMI people that use multimodal intercity bus services in your growing transit oriented development district. LOL, TOD should be called COD as all development is still car-centric in Richmond.

Just because people think the facility is an eye sore and should be redeveloped does not mean people want the service removed. Updated? Yes! Gone? No.

It would be great if we could co-locate the downtown GRTC hub with Greyhound. Linking up the path to the airport would help Richmond get closer to realizing it’s multimodal dreams.

Why are the going t00 put a pedestrian/bike lane there? You would have t have a serious death wish to ride a bike in Scotts Addition. Potholes, no sidewalks, and tipsy drivers, and no bike lanes.

Have any of the people who downvoted me BEEN to Scotts Addition?

I’m there every day. Honestly it needs sidewalks and better lighting, but aside from that it’s one of the easiest places to bike in Richmond. It’s much much emptier than people think it is.