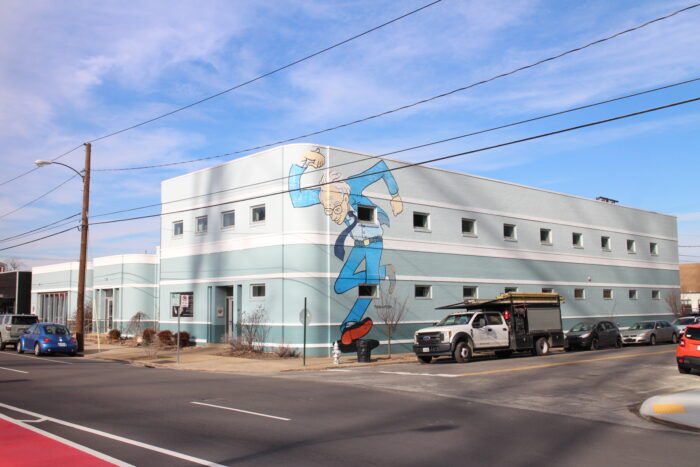 A mural of Bernie Sanders has been on the building’s east-facing façade since 2016. (Mike Platania photo)

The “Bernie Sanders building” along Broad Street has a new owner.

The Highpoint building at 3300 W. Broad St. in Scott’s Addition has sold for $3.75 million. The buyer was Reynolds EmpowerHome, a team of agents that’s part of brokerage Keller Williams Realty.

Joane Justice, Reynolds EmpowerHome’s local lead, said the group’s plan is to use a portion of the building as an office for its team of 10 agents, but that the Highpoint’s current tenants’ leases carried over in the sale.

Since 2018 the 17,000-square-foot building has been The Highpoint, a shared workspace for creatives including taxidermists, sculptors, graphic designers, florists and more. It also briefly housed a taproom for Courthouse Creek Cider. “There were some empty spaces, so we’ll take those that are already empty. We’ll still be leasing spaces and we wanted to keep the spirit of the community,” Justice said, adding that her firm will occupy only about 750 square feet in the building.

The sellers in the deal were David Morrison, Claire Accardo and Robert Olsen, who bought the building in late 2012 for $600,000 and oversaw the redevelopment of it from a Sea Dream Leather location into The Highpoint. Morrison declined to comment on the sale, which closed Dec. 30.

The city most recently assessed the building and its 0.3-acre parcel at $2.9 million.

Justice said they’re planning to keep The Highpoint’s branding in the near term, but they’re not sure what the future will hold for the large mural of U.S. Sen. Bernie Sanders that’s been on the building’s east-facing façade since 2016.

“It’s iconic so I don’t know what’ll happen with (the mural),” Justice said. “If that mural were to not stand, we’d have another mural so we’d open up an opportunity to another local artist. But right now we’re not going to make any changes.”

Reynolds EmpowerHome will leave its current office at Paragon Place in the West End and move into The Highpoint in February.

Justice has been a residential agent in the Richmond market for almost 20 years and helped launch the Reynolds EmpowerHome team in 2017. She said she thinks rising interest rates have caused the region’s housing market to normalize a bit after an unsustainable run the last few years.

“We’d all been so pacified by (interest rates) being at 3 percent for like 12 years. It’s not insane the way it was the last two years where you couldn’t even get a sign in the yard without getting multiple offers for $20,000 or $30,000 over the asking price,” Justice said.

“I think Richmond has been blessed with being somewhat impervious to the extremes of highs and lows (of the housing market). We have so many universities, the seat of government here – we have a pretty strong foundation. We’re not as mercurial as D.C., which rolls over every four years.…We’re very fortunate in that respect.”

This is an agent/team who loves to charge their sellers 3.5% to list their home and then offer a buyers agent 2%…just thought people would like to know!

It’s great to see a firm reinvest in an area they have served for so many years. Congratulations to all involved; the positive community impact is only just beginning.

The Richmond community has been VERY close to the heart of EmpowerHome, as Richmond was our first destination outside of Northern Virginia to expand the EmpowerHome systems for buyers and sellers. These systems are proven to get our sellers more money than the average agent, and we wanted to take part in helping protect the home values in Central Virginia! Partnering with JoanE was one of the best decisions we ever made, because she is LOCAL, KNOWLEDGEABLE and CARES so deeply about the Richmond community, just as we do. It is such an honor to own this building with her… Read more »

Different agents will get different results for a client and that is why fees are not fixed. If an agent brings value to a client that convinces them to pay for that value, then I would want to learn what is that agent doing that clients agree to pay her a higher fee.

The building was bought then sold 10 years later for a massive profit AND there’s a huge Bernie Sanders Mural on the side?….oh the irony…