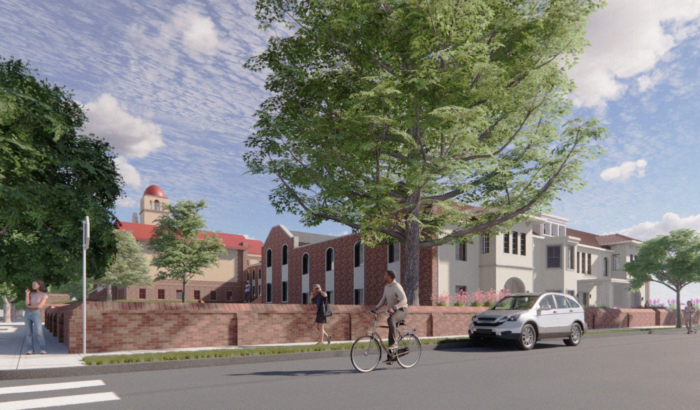 A rendering of the planned renovation of Saint Gertrude High School into apartments. (City documents)

The Richmond-based development firm has been planning to convert the 110-year-old school building into 39 apartments. City Council approved the project’s special-use permit last fall and SNP closed on the property on Jan. 9.

Saint Gertrude, an all-girls Catholic school, had operated in the Museum District for nearly 100 years until 2021, when it moved to Benedictine College Preparatory’s campus on River Road in Goochland. The Stuart Avenue property, which spans over 2 acres, includes the main, 69,000-square-foot school building and a handful of surface parking lots around it on Cleveland and Tilden Streets.

In addition to converting the school into 39 apartments, SNP is also planning to build a pair of townhomes on one of the lots on Tilden Street. 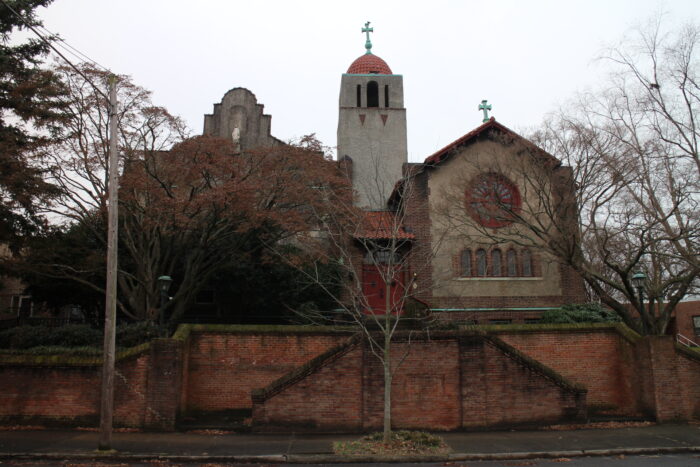 The Saint Gertrude High School building has been vacant since 2021,  when the all-girls school moved to Goochland. (Mike Platania photo)

The real estate was most recently assessed by the city at a combined $11.1 million. The seller was Saint Gertrude monastery and Benedictine Sisters of Virginia. Colliers International’s Rebecca Barricklow and Joe Marchetti had the listing.

SNP principal Eric Phipps said the firm’s plan is to convert the units into for-sale condos five years after the apartment conversion is complete. 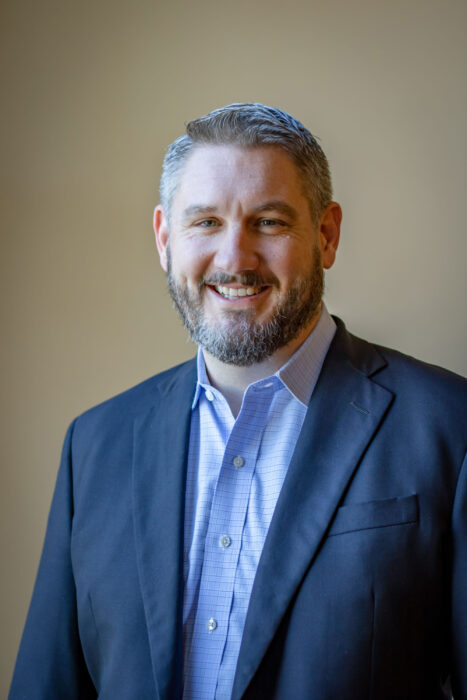 “These will be very high-end, condo-quality rental homes,” Phipps said. “We think it’s the highest and best use for the property to be able to keep the building in its current footprint.”

Phipps said they’re aiming to begin work in about a month and have the project complete about a year later. Fultz & Singh Architects is handling design, and Phipps said they’ve selected a general contractor but declined to disclose who it is.

SNP also recently spent $6.1 million on a 1-acre parking lot in Jackson Ward where it’s planning to build a 12-story, 250-unit apartment building. Construction hasn’t yet started on that site, but Phipps said they’re still working on it and hope to have an update on that project in a couple of months.

Elsewhere in the Museum District, Flournoy Development Group is planning to build a 6-story, 260-unit apartment building at 3600 Grove Ave.

The Georgia-based development firm is under contract to buy the 2.2-acre site, which currently houses a closed, derelict Windsor Senior Living facility.

Flournoy gave an update on its plans at a virtual community meeting last week, where developer representatives said they’ve recently tweaked the design of the building to include more red brick in its façade. The project requires a special-use permit, and Flournoy said it’s hoping to go before the city’s Planning Commission at its March 6 meeting.

As a resident of the Museum District for nearly 30 years, I’m happy to see the SNP plan for St. Gertrude’s School going forward and closing. It’s a beautiful building.The Flournoy proposal for the corner of Grove and Thompson should have drawn more press coverage though. That’s a significant change to the area, and it’s drawn a lot of heat from neighbors who are resistant to its height and mass. Also, What’s become of the proposal for the Marriott branded hotel which would have replaced the old office buildings at Floyd and Thompson?

Thanks for mentioning the hotel proposal at Floyd and Thompson. I’ve wondered that too! It was floated right before Covid hit and then nothing since. As for the apartment proposal on the corner of Thompson and Grove, that’s concerning because of the exit from the expressway right there. Where they put the driveway for their parking will matter.

I wonder if that deal ever went through the buildings not owned by KM hotels and those are the same parties that were doing a hotel then apartments out at the old Holiday Inn by Altria.

As a Museum district resident I really like the Fluornoy proposal. West of Thompson, surrounded by highway and exit ramps is a great location fo it. And we need the housing

I hope the gymnasium fits into the plans for the new apartments. The gym was a nice gym and was a relatively new addition, within the last 15 years at most.

I ask the question, why build apartments if you will be converting to condos in 5 years? The only answer I can think of is that apartments are cheaper to build and have a lower bar for building codes. If that is so, then reselling as quality condos is a myth.

Five years of Federal Historic Tax Credits for renting out the units. Same reason they are keeping the exterior untouched. Once the tax credits are used up, then they will sell. Same approach used by a lot of developers. Monument One for instance.

I’m wondering how they will make $10.5M work for only 39 residences. That’s a sunk cost of over $260k/unit before any renovations. I realize these will likely be pretty large units and will probably sell for $500k+ each. However I expected them to incorporate some new construction as well.

As far as “why apartments first?”, can’t developers recoup historic tax credits for 5 years only if they’re apartments? Otherwise the tax advantage goes to the unit owner, which is a harder sell since it’s not reflected in the list price.

same thought, that’s a big land cost, those will need to be expensive

SNP did a great job of involving the community very early in the process. They hosted a zoom webinar to review their draft proposal before submitting it to the city (in fact long before they officially acquired the property) to share their vision and solicit feedback. I wish more developers would treat invested neighbors with the same respect and care. Their work would benefit.