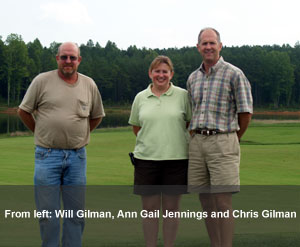 That’s how many members Chris Gilman wants to recruit to the Federal Club, the struggling upscale golf club in Hanover County he and his family bought three months ago. (You can read more about Gilman in an RBS Q&A here.)

The Federal Club was built in the go-go years of the past decade and never made money before going bankrupt a year ago.

Now Gilman is fine-tuning the course and kicking his marketing plan up a notch as he tries to get the number of members up to 250 as soon as possible. The club has 131 members, Gilman said, including 19 who joined in September.

New members start out as potential members, and that means they need to see the club. ??So Gilman is trying to get Richmonders in to see the bent-grass course. On Nov. 13, the Federal Club is hosting a grand reopening, including a golf tournament and oyster roast for $95 per person.

Gilman has also set a date by which he hopes the club will again be fully private: September 2012. The course currently lets non-members pay green fees to play.That was a strategy the previous owners added in hopes of stabilizing the revenue.

But before a members-only club, Gilman needs more members.

“I think the loss of membership has run its course,” Gilman said.

“We lost a dozen or so that left due to frustrations over the old ownership in bankruptcy,” he said, “and we lost another half dozen who were upset we wouldn’t promise them a new clubhouse.”

The competition is fierce: The Federal Club is not the only course that slashed initiation fees and dues. (You can read more about that in an RBS story here.)

Since taking possession of the club three months ago, Gilman spent $500,000 on maintenance equipment and bought 40 new Yamaha golf carts with club washers, a touch Gilman said golfers should like.

He’s methodically fixing the bunkers (at $10,000 a month) and reseeding the driving range. And he’s hired a PGA pro for teaching.

“We’re focused on improving the quality of our product by doing maintenance and renovations that [the previous owners] couldn’t afford to do during bankruptcy,” Gilman said. “The quality of the product will help drive the sale of new memberships,” he said.

Anyone who is familiar with private country club demographics in this area already knows why the Federal Club is in huge trouble. Take away the elite clubs in Richmond (CCV, Hermitage, and the like) and you have perhaps ten private clubs in Richmond who were already struggling because the economic reality suggests there are only enough members to support seven or eight. It’s simple supply and demand. Those realities existed before the Great Recession. On top of that, the Federal Club is the new kid on the block. There are many established clubs in Richmond that didn’t just go through… Read more »

golf is a waste of time. I played it until I got a life.

The course itself is in great shape and quite beautiful, but it’s the little things that are missing. I played in the Spring and never saw a trash can, a water cooler, a ball cleaner or any staff on the course. The service at the clubhouse was a joke and the only food was from a pool snack bar. If they want folks paying big bucks they are going to have to step it up. Places like the Foundry are light years ahead, but maybe that isn’t the same group of people they are competing for. Chris is probably right,… Read more »

I have several alternate headlines for this article: