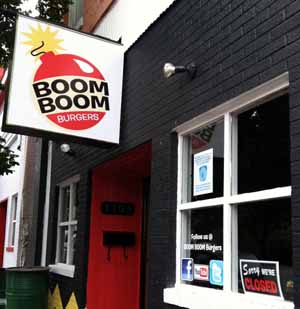 One of Shockoe Bottom’s newest restaurants has closed after only three months in business, and the owner says the deteriorating neighborhood is to blame, according a report published last week.

But last week, Richmond.com reported that Boom Boom had closed, and it published an emotional letter from Eftekhari-Asl, who said this isn’t the end of the Boom Boom concept, just the end of it in what he called an economically depressed Shockoe Bottom.

“We were edged out by macro-level pressures happening in Shockoe Bottom,” Eftekhari-Asl said in the letter, according to the Richmond.com report.

But Eftekhari-Asl wasn’t done there.

“The truth is, retail businesses that are really thriving are nightclubs and bars catering to the lower class urban population of Richmond,” Eftekhari-Asl said in the published letter. “This proved to be a very difficult and impossible barrier for us to overcome.”

He went on to say more about the demographics of customers frequenting the Bottom and why his concept wasn’t drawing them in.

“We were a new business with some pretty progressive ideas that opened up in an area that is undergoing a consumer demographic shift. A sort of de-gentrification, if you will,” Eftekhari-Asl said. “No restaurant can stop that, especially a little burger shop like ours.”

That letter apparently caused enough of a reaction to cause him to write another to apologize and further explain his remarks.

David Napier, head of the Shockoe Bottom Neighborhood Association, said he is well aware of the Boom Boom owner’s comments.

“We hate to lose a business,” said Napier. “But the area already was what it was when he came down there. His comments were that his menu was not for that crowd, and I thought it was a poor choice of words.”

Napier conceded that the Bottom faces some challenges.

“I know some of the smaller restaurants don’t like the direction the neighborhood is going, and some of the residents don’t, either. And it is tough on small restaurants and independent owners because the Bottom has turned into more of a large club district.

“I hope it doesn’t turn into an all-club district. But it is what it is.”

Napier said three months is a short experiment for a restaurant, even in the Bottom.

“I don’t think you can blame [Boom Boom’s closing] all on the night club scene,” Napier said. “There is a lunch trade at Lulu’s, River City and Cafe Gutenberg. He just wasn’t able to tap into the day trade.”

Napier said that many of the Bottom’s business owners still wish a baseball stadium had been built in the neighborhood to help the area’s economy evolve faster.

“The club owners all were in agreement with the smaller businesses,” Napier said. “We all agreed that a major econ driver would make the neighborhood better.”

While the overall economy may be to blame, the real truth is that Shockoe Bottom’s decline began back in the summer of 1998. The new owners of the Flood Zone started hip hop night that attracted a new clientele. The Bottom never recovered after that.

Joshua could have used a little more sensitivity in his letter, but I echo his concerns about the clientele and appreciate his candor.

Poor choice of words, yes… But Joshua brought up something that’s been obvious for the last 10+ years. I remember the Bottom used to be a fun, safe area to hang out in. Then as 31 year old mentioned above the Flood Zone ownership change sent everything down hill. I remember my friends and I used to hang out there regularly in the late 90s. Then you started seeing a few vehicles that begun to “cruise” the area on weekends. Then it was a few more. Then getting pizza after a night out at HAND wasn’t a good idea anymore.… Read more »

The Bottom is exploding with growth. Over 500 residential apartments are coming online in Q1 2011 through Q1 – 2012. And they aren’t low end apartments. The average rent is $1.25 per sq ft. The Bottom has been a nightlife center for 20 years. Nothing new there. I think the statement that a “lower-class urban population” took over is racist at best.

I ate a Boom-Boom once and had no intentions of returning. The sandwich was sloppy (we asked for plastic knives to cut it in half to try to control the sauce from dripping on our clothes), the sides were weird (collard greens or baked sweet potato), a 8 oz plastic cup of iced tea cost the same as a bottled drink and there were no refills, the presentation was cheap, the restaurant cheaply decorated and they didn’t take cash. Why would we go back? Oh yeah – I am a white, college educated, female professional in my 50’s who met… Read more »

Shockoe Bottom has always been a challenging place to start a business. I started a more family-oriented business there in 2004 and was only able to make it work for 3 years. I gambled on the new stadium bringing in more families and tourists, and I lost. However, I knew what the environment was when I signed up, and any business owner has to take personal responsibility when they choose their location. “Build it and they will come” is a myth. I empathize with Joshua, and understand how frustrating it can be when your dream doesn’t match reality. Unfortunately, he… Read more »

Though I am saddened to see an entrepreneur struggle and a business in the urban core close, attributing Boom Boom’s demise to Shockoe Bottom nightlife is overly simplistic. There are several excellent restaurants with sophisticated menus in the immediate area that seem to be surviving, if not thriving, including Cafe Gutenberg, Lulu’s, Aziza’s, Sette and Millie’s. Although Boom Boom had an intriguing storyline of redefining burgers with grass-fed beef from a Polyface Farms, a rockstar in local foods, I think there were too many aspects that were not thought through. For one thing, the location was challenging. It is a… Read more »

I went to Boom Boom once. It was a decent burger, but small and expensive. Plus, the side street location was crappy. I’ve been to the Bottom twice in the past year and that was for Julep’s. Love them!

Anyone who questions the connection between money and emotion need only read this cautionary tale to clear up any lingering doubts. Eftakari-Asi’s choice of Shockoe Bottom for an upscale burger business was problematic – and Napier’s use of Gutenberg, River City, and Lulu’s as exemplars of success at lunch in the Bottom is also problematic, given that Gutenberg’s owners are trying to sell after a frustrating few years, and River City and Lulu’s are part of larger restaurant groups that have more scale to support revenue fluctuation. Shockoe Bottom is many things, but once the sun goes down it becomes… Read more »

Mr. Eftekhari-Asl’s frustration with the performance of his restaurant is certainly reasonable. His perception of why his restaurant was unsuccessful may be a bit short sighted. I took a chance on Boom Boom for lunch one afternoon and found the menu incredibly limited and the food mediocre at best. Additionally, while I understand and support the need to engage our local resources, which some times requires extra expense, the pricing was higher than the quality of the experience warranted. I adore LuLu’s, Sumosan, and Cafe Gutenberg as do many of the diverse people that live in and around the neighborhood.… Read more »

Carter Snipes: i’m white and i didn’t read ‘lower class urban’ as black, so why did you? oh wait, you must be black. i must be a genius. you people are the real racists.

re: Carter Snipes Carter have you been down to Shockoe Bottom in a while (especially, when the clubs are letting out on a Friday or Saturday)? Yes, this has been a bar/club district for many years…but it has only been recently (past 5 years or so) when the police presence has been at an all-time high, for good and obvious reasons. The Botttom has turned into a cesspool (Google: “shockoe bottom youtube”…and see what it’s like for yourself). Growth in apartment/residential development is irrelevant to commercial development in this particular case. The state of the Bottom surely is not the… Read more »

Great comments above. I think there is a point about shockoe that the city should pay attention to. The clientele’s demographics shouldn’t matter, but safety should. Probably the answer is to cover the area in police at night, maybe paid for by a local business improvement district?

That said, the concept clearly had problems as well. High end burgers work, I’ve paid $18 for a burger and thought I got my money’s worth, but you really have to deliver value. That was not the rep the place had.

We support all the restaurants down in Shockoe Bottom with take-out-orders that we make for clients every-day of the week. Boom Boom made it so hard for us to order from because they would not take cash… they did not have a phone…. they would not cook ahead for pick up… and they made you wait for each order… and they were ALWAYS out of something. We made a bet at work this place would not last six months… surprise! THREE. I think this guy blaming the clientele verses him-self is LAME. Lots of places do great down here in… Read more »

Oh Laura!–you are in VIRGINIA! Do NOT DARE call collards or sweet potatoes weird!

BOOM BOOM went bust. So what, move on.

These letters are going to be going on longer than the Place they are written about. You will have the people who agree with some of the sentment and other who have to call anyone like that Racist. The business failed the owner felt frustrated and lashed out frankly it is over get on with your lives.

If you’re looking for a reasonably priced burger and good french fries look no further than Bo-Dillaz at 916 W. Broad Street. Try the Rodeo Burger or the Tank Johnson Burger. Thank you. Support Richmond Biz Sense.

As a citizen of the city (for the past 6 or so years) who is in my 20 somethings and LOVES to not only eat, but go out as well…I can tell you right now, it’s all about the location. I don’t know ANY of my friends who will go out to a bar or club past 14th st. So Carter Snipes, I’m not exactly sure where you are getting the idea that it’s thriving. I have a very diverse group of friends, and the reason why we stay away from anything past 14th is because there is nothing going… Read more »