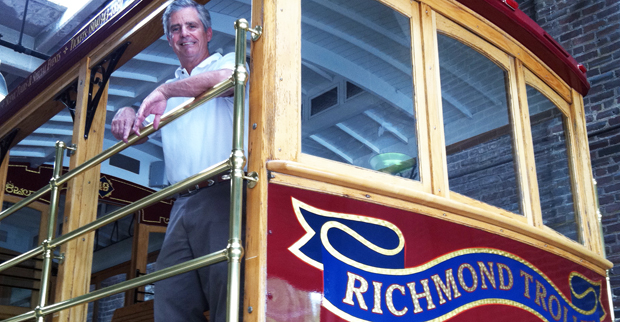 Buck Ward is shown during happier times for the Richmond Trolley Company.

A rift between two business partners has left a local trolley company in limbo.

Buck Ward and John Moulton became fast friends in recent years by working together on Segway tour businesses in Richmond and Fredericksburg and on the Richmond Trolley Company.

Now Moulton, who says he bankrolled the trolley operation and helped bail out Segway of Richmond when it lost its insurance amid multiple lawsuits, wants to go his separate way. And although he says he’s sad to see the friendship end, Moulton has taken the company’s five trolleys with him. 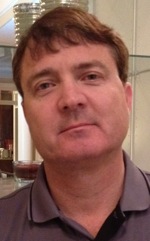 “We’re trying to dissolve ourselves of this toxic relationship,” Moulton, 50, said. “I want to put pride behind us. This is a business thing.”

Lawyers are now involved as Ward and Moulton move toward a likely dissolution of their partnership that will determine who gets ownership rights and name-use rights for the Richmond Trolley Company, viewed by both sides as a valuable commodity.

Moulton, who runs Tactical Micro, a Fredericksburg-based government contractor that builds audio/video systems for military vehicles, has taken control of five trolleys purchased for Richmond Trolley in 2011. He also split off and opened his own Segway shop, River City Segs, in an old fire station in Shockoe Bottom.

Ward, meanwhile, continues to manage Segways of Richmond on Cary Street in Shockoe Slip. He recently purchased a trolley of his own and started another trolley tour business.

Ward declined to comment on the situation until the legal negotiations are resolved.

Disagreements over how to run the business and Moulton’s desire stop pouring so much money into it forced Richmond Trolley to suspend its tour business in July. The company is still running charters, but Moulton is eager to get the business back to full operation.

“Right now we can operate [Richmond Trolley Company] indefinitely in this limbo,” Moulton said. “The problem is it’s not a healthy environment.”

As Moulton tells it, he met Ward in early 2010 when he was looking to start a Segway tour business in Fredericksburg.

Ward, who at the time owned the Segway dealership in Shockoe Slip, sold Moulton a fleet of the machines, and the two eventually teamed up on a tour business at the Spotsylvania Battlefield. They shared the revenue of that venture and enjoyed working together, Moulton said.

In 2011, Ward’s Segway shop ran into legal trouble amid a trio of personal injury lawsuits filed in rapid succession by several tour customers. The shop’s insurance carrier dropped Ward’s store, and other insurers wouldn’t touch it, at least not at a reasonable price.

Moulton says he stepped up and helped Segway of Richmond regain insurance coverage.

“Basically [Ward] couldn’t do tours,” Moulton said. “I closed up my operation in Fredericksburg and brought all 20 Segways down to Richmond and hired all the people from Segway of Richmond.”

Moulton said he put up money to keep the Segway business on stable footing.

“Our friendship started budding in that relationship,” Moulton said.

The two got the idea to start a trolley tour and charter business to take advantage of Richmond’s historic sites.

They found some trolleys on the West Coast and took a road trip together to make the purchase, Moulton said, further strengthening their relationship during the drive.

Moulton said that Ward admitted during the trip that he didn’t have the money for his half of the purchase.

“I said don’t worry about that,” Moulton said. “Let’s get this up and running.”

As they got the business going, the two partners began to have disagreements on pricing, marketing and operations, Moulton said. The business was losing money, and Moulton said he eventually grew tired of footing the bill.

“It became too burdensome and too confusing, and it continued bleeding,” he said. “That’s when our relationship went south.”

Moulton said he eventually decided to exercise a provision in the agreement he had with Ward that allowed him to essentially foreclose on the trolleys.

“I paid for the trolleys. I took out a mortgage on my house to do it,” he said. “If the company couldn’t pay me, the trolleys would be turned over to me. That’s what happened this past summer.”

For now, Ward and Moulton are still legally partners in the Richmond Trolley Company entity.

“I’m not bitter,” he said. “I’m just trying to be a businessman and do the right thing.”

Kathy Lawrence, an attorney at Hirschler Fleischer, is representing Moulton in the negotiations.

Vernon Inge, an attorney with LeClairRyan, is representing Ward.

Richmond Trolley Company continues its charter business and is planning Christmas light charters. It plans to launch new tours in 2013.

“It quickly can be very profitable if you do it right,” Moulton said.

Money and friendship often don’t mix. If you have to do it, it’s a good idea to have an equally shared monetary investment. This story makes me sad. ice out.

I hope people continue to sue that Segway company left and right. Touring the city is cool, but riding up on the sidewalk in huge herds and disregarding the people actually walking isn’t. These guys once yelled at me because my dog barked at them when 15+ segways rode by up in the park in Church Hill.

I pray this dissolution dissolves that company too. Trolley’s can stay, I like you 🙂

Ah, now I understand, this whole thing is really retribution for Ike and his dog.

I hope the best for these entrepreneurs. I appreciate what Buck has done with his groundbreaking business in Richmond.

That said, I am wondering about how this will effect the bigger picture of mass/public transit for city.

Mass Transit, Scott this was a tour business that is less than 1 year old and whose trolleys (and now I see why) squat for cheap on vacant but VALUABLE real estate. It was never any type of transit option. I hope real solutions come soon and one would be the proceed of selling the bus barn to help improve/expand service.

So the old Bus Barn is again a storage place for trolleys that don’t run, buses to “sleep” or people to park. What an excellent use a valuable real estate.

Michael D, the trolleys run all of the time. I see them around the fan (where I live) almost weekly. It looks like they are chartered out by private groups for weddings, events, bar crawls, etc. They aren’t just sitting in the barn not being used…..

Also, from my understanding, the “Bus Barn” will take a few years before it’s even ready to be sold. It’s not just a valuable piece of real estate rotting away. It takes time to prepare a property of that age to be sold…