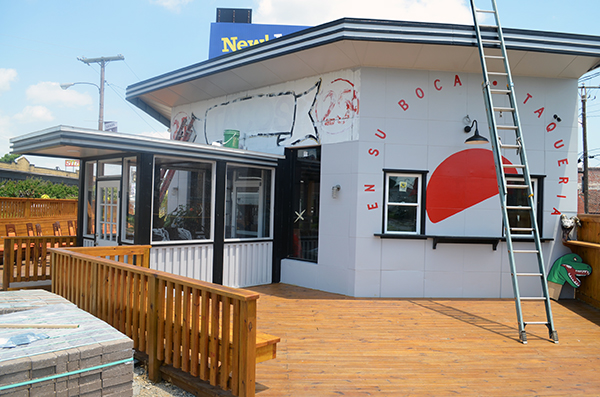 En Su Boca is set to open within weeks at 1001 N. Boulevard. (Photo by Mark Robinson)

But Patrick Stamper and Randy O’Dell, owners of En Su Boca, say the restaurant is only a few weeks away from opening in the former Triangle Book Store at 1001 N. Boulevard.

The pair, who also own BellyTimber Tavern in the Fan, took over the 1,300-square-foot Boulevard space last year.

Charlie Diradour, whose Lion’s Paw Development purchased the property in late 2011 for $225,000, said the structure needed new flooring, walls and electrical components. The development has cost about $350,000, he said.

The building was a Texaco gas station in the 1950s, and became the Triangle Book Store in the 1970s. The book store closed in 2011.

If all goes well with the final inspection, they’ll apply for a health permit, ABC license and a certificate of occupancy, he said.

The pair’s third partner in En Su Boca, San Francisco-based chef Eric Stangarone, is flying to Richmond this week to fire up the burners. Still, Stamper said it would be a few weeks before the restaurant opens.

When it does, he expects a boost from visitors to the nearby Redskins training camp facility, Squirrels fans on their way to and from the Diamond, and workers gutting the old Interbake building behind the restaurant.

Diradour says the restaurant will be worth the wait.

“These guys have done it the absolute right way,” he said. “Patrick and Randy have not missed a beat. There’s been a lot of anticipation about this place opening up, but sometimes good things take a while.”

I can’t wait for this place to open!

Seriously? This is the name……BWAHAHAHAHAHHA

Kathy;
Please note that as the developer I want to assure you that all flooring, walls, and ceilings were removed and new finishes placed due to our thorough manner of building. I was as concerned about the issues you raise as you are, but I assure you that this is not the same building we purchased. Hope to see you at En Su Boca.
Charlie

Can’t wait to check it out!

I am hoping that the picture above is new, and someone has already addressed the issue I’m about to discuss. I’ve had a question that has been driving me crazy every time I pass by the place, and that is: Who approved the exterior paint job? TACO’S was clearly painted above the entrance, apostrophe and all. Unless the full name of the restaurant is “Taco’s En Su Boca Taqueria” and your chef or owner’s name is Taco, please fix this problem before opening – if you haven’t already. If you have already fixed this, THANK YOU. It’s ridiculous enough to… Read more »

Well said if you are clueless about “demos” to food service businesses….and you think your like-kind folks are will support the business and the owners profit…..which is what the owner uses to put food on his table.

@Dudley I spend a lot of money in local food joints each week with my family and friends. I/we also love tacos. Im pretty sure that is a demo an owner would be interested in, whether or not I thought the tribute to the history made me queezy or not. More importantly I was clearly stating an opinion that folks would not want a constant reminder that the building’s primary purpose was for men to pleasure themselves in it. Call me crazy for having that opinion. I gave the swinging steak example another strange one was Friend or Pho….people got… Read more »

charlie
welcome to the neighborhood. i know the folks in my new apartments at Interbake are going to be frequent customers and i appreciate all your efforts to re-brand and clean up the boulevard. this is the future hub of richmond!!!!!

I’m surprised no one has mentioned that their name also completely rips off the Boka taco truck. “In your mouth” / “Takos for your mouf!”