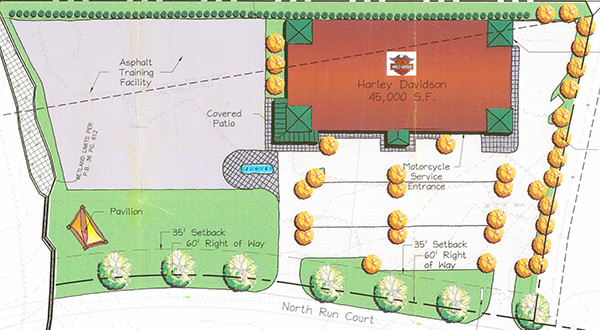 Richmond Harley-Davidson is relocating to add 20,000 square feet worth of leather, chrome and motor oil to its Hanover County dealership.

The motorcycle franchise broke ground last week on a $6.5 million, 52,000-square-foot facility at Northlake Park with hopes of moving in spring, company president George Wills said. The new building will sit on a seven-acre plot at 12200 Harley Club Drive and front Interstate 95.

“We get a lot of customers from out of state now just passing through,” Wills said. “That’s going to increase that by tenfold.” 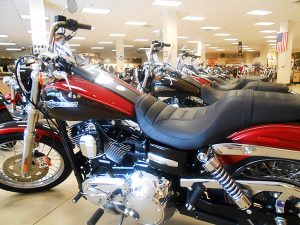 Inside the dealership’s Washington Highway location, which will close. (Photos by Burl Rolett)

The planned Northlake dealership will replace Richmond Harley-Davidson’s location at 10441 Washington Highway, which Wills said the company will put up for sale once after the move. The new facility will be about 20,000 square feet bigger than the current location, and the company will add 10 jobs, increasing its staff to about 60 employees.

The company has owned the property at Northlake since 2007. A new facility at the site was always in the plans, but the economic downturn put the expansion on hold.

The bigger space will make room for an increase in parts, apparel and bike inventory. The showroom at the company’s current location has about 50 motorcycles on display. Northlake will also feature a permanent outdoor stage for concerts and room for bike rallies, blood drives and other events.

This is Richmond Harley-Davidson’s second expansion in the past year or so. In June 2012, the company opened Steel Horse Harley-Davidson, a 20,000-square-foot dealership on Hull Street Road in Midlothian.

Ashland-based Haley Builders are the general contractors for the new dealership, and Balzer & Associates are the architects.

Since the motorcycle company bought the Northlake property in 2007, a Bass Pro Shops has opened at Northlake, and plans for a massive outlet mall have been put in motion. The Commonwealth of Virginia also scooped up scooped up 14.5 acres at Northlake this year, with plans for a new Department of Game and Inland Fisheries headquarters.

“The timing is right now,” Wills said in a prepared statement. “Recent announcements at Northlake Park along with our sales growth confirm our decision to construct the new dealership.”

A rendering of the planned location at Northlake Park in Hanover County. (Click to enlarge)

I would like to know wherethe new shop is going to be . is it near bass pro shop .