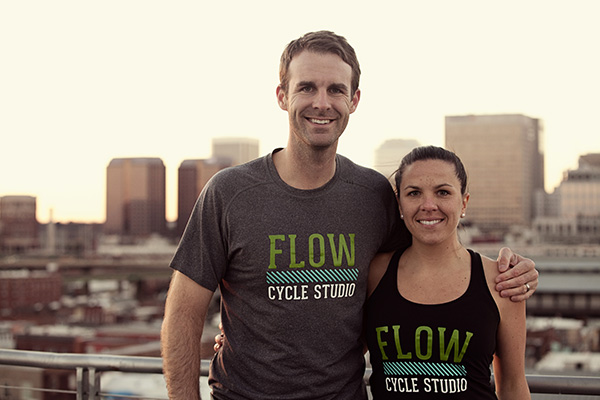 Another fitness startup is looking to whip Short Pump into shape.

Flow Cycle is the second cycling studio and at least the third fitness startup to eye the Short Pump area for a launch in recent months.

Tidal Wheel just opened its third location in Innsbrook, and Pure Barre, a ballet barre fitness studio, is slated to open just a mile away from the future Flow Cycle.

The venture marks a career change for Erin Jones, 27, who played field hockey at UR and recently left her job as a pharmaceutical sales rep to get Flow Cycle rolling.

“At the end of the day, I just wasn’t fulfilled,” she said. “I didn’t want to wake up five years from now saying, ‘Dang, I should’ve done something different.’”

Ja Jones, who was a pitcher on the UR baseball team, is sticking with his job as a financial adviser for Wells Fargo.

To better understand what they were getting into, the couple hired Bill Pryor of Spynergy Consulting Services, a Massachusetts-based company that specializes in start-up cycling studios.

“We knew there would be unforeseen costs and things we should be aware before we jumped into the business,” Erin Jones said.

The couple would not say what it has cost them to get in on the two-wheeled trend but said the 19 bikes they’re installing go for $1,800 apiece. The Joneses are relying on personal funding and investment from family members to launch the studio.

A walk-in class at Flow Cycle will cost $16. Five sessions will go for $75, and a month of unlimited classes will cost $120. The studio will offer classes that incorporate cardio, core strength training and yoga and will sell local products and Flow Cycle-branded items.

Although they have plenty of nearby competition, the Joneses say they’re up for the challenge.

“It’s exciting,” Ja Jones said. “It goes back to us being athletes and having that competitive spirit.”

Great couple starting this business. All the best to Ja and Erin. I am sure you will be a wonderful success.

Erin and Ja are true professionals and great people! Their exciting new endeavor is a perfect fit for their fun and enthusiastic personalities. I am confident that they will be most successful and wish them the best of luck!

What a fantastic idea. These guys know what it takes to get and stay in shape. What they learned as elite athletes is more than people will get at any other fitness studio.
Go for it guys!