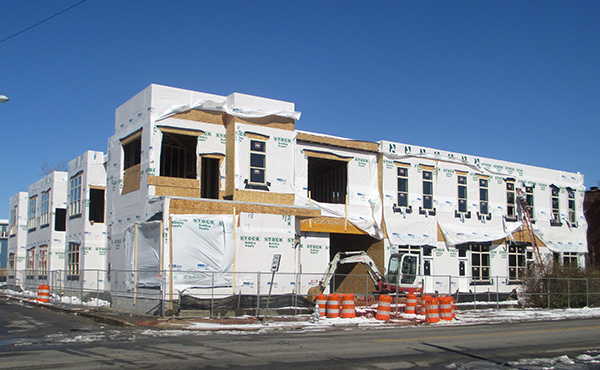 The 21-unit project at 12th and Bainbridge streets. (Photo by Burl Rolett)

The development of Manchester marches on.

Local developer Ben Adamson is bringing more apartments to the Southside neighborhood with a new 21-unit project at 12th and Bainbridge streets.

Adamson’s $2 million project aims to be a sort of hybrid apartment building with a single-family feel in attempt to make the property stand out in an ever-growing Manchester residential market. Residents will enter their units from an outdoor courtyard, and there will be no common spaces or interior hallways to share.

“You have a key to your front door, and you open it and you’re in your unit,” Adamson said. “It’s not like you’re going up an elevator, third door on the right type of thing.”

Adamson broke ground on the project in November using a working title of 12th and Bainbridge. He’s preleased two of the spaces and will be moving tenants in on July 1. All of the apartments are one-bedroom units and will rent for $900 to $1,000 per month.

This isn’t Adamson’s first shot at developing Manchester: He also built a trio of duplexes directly behind 12th and Bainbridge (fronting Porter Street) and a string of duplexes on McDonough Street.

Adamson got his start in Manchester development under Robin Miller, a prominent Southside developer who has built several hundred apartments in the neighborhood with business partner Dan Gecker.

Adamson bought the half-acre 12th and Bainbridge parcel from Miller and Gecker in May for $193,333, according to city records.

The 12th and Bainbridge project will join more than 2,500 apartments under construction or delivered to Manchester in recent years. A major mixed-use development at Reynolds South could add 250,000 square feet of office space and a retail center.

Adamson said retail and restaurant uses are a missing piece in the Manchester building boom. He’s including about 700 square feet of commercial space at 12th and Bainbridge. He considers the space more of a draw for potential residential tenants than a revenue generator but hopes it will fill a need for walk-up business in the area.