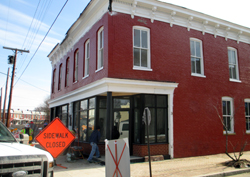 Metzger Bar and Butchery is setting up shop at 801 N. 23rd St. in Church Hill. (Photo by Michael Thompson.)

Another group of entrepreneurs wants to cut out their own slice of the increasingly busy Church Hill business scene.

Metzger Bar and Butchery is setting up shop at 801 N. 23rd St. and plans for a May opening. Owners Nathan Conway, Brittany Anderson and Brad Hemp signed a three-year-lease for the 1,400-square-foot space that will serve German-style food and retail cuts of meat, sausages and wine.

Metzger is the German word for butcher, as well as a common German surname. Hemp said there was a time when it was easy for East End residents to get a fresh cut of meat in a hurry. In the early 20th century there were so many German-run butcher shops in Church Hill that many referred to the neighborhood as “Butcher Town,” he said.

“It could be a fictional German person who could have run this place at the turn of the century,” Hemp said of the name. “We’re paying homage to that tradition with the restaurant and the food.”

Hemp, who also owns and operates local wholesaler Sausage Craft, said he expects the construction for Metzger to cost between $30,000 and $40,000. The meat-pushing trio is using personal savings and family loans to finance the venture.

Conway and Hemp first linked up in 2009 when they worked together at Belmont Butchery in the Museum District. Conway, a 2010 Virginia Commonwealth University graduate and chef at Secco Wine Bar in Carytown, later helped Hemp with Sausage Craft events. (Click here to read about a legal dispute in 2010 between Sausage Craft and Belmont Butchery.) 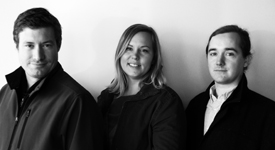 Anderson has been cooking for 13 years between New York and Richmond and met Hemp and Conway when she helped at Sausage Craft in 2011 and 2012. She occasionally cooks at The Roosevelt at 623 N. 25th St. and will be in charge of the kitchen at Metzger’s.

Metzger’s will look to hire between 15 and 20 people to run the business and are hoping to eventually add an outdoor patio.

The German bar and butchery won’t be the only place where East End residents can go to dine and shop under the same roof. Union Market, an independent market and eatery at 2306 Jefferson St. opened in January.

Urban Farmhouse also has a new a Church Hill outpost with a cafe and market.

Metzger’s, however, will be even more niche, focusing on meat and wine.

“We’re not a specialty grocery store,” Anderson said. “We’re more of a restaurant.”

Grocery store or not, Metzger’s will have a butcher carving up slabs of pork and filleting cuts of fish for retail shoppers. Conway said that with Union Market nearby and the re-opening of Sub Rosa bakery at 620 N. 25th St., the addition of a butcher shop will round out the needs for East End gourmet shoppers.

Other businesses have eyed Church Hill as a good place to start up. Chocolates by Kelly plans to open a new storefront at 600 N. 29th St. Urban Set Bride opened March 2 at 602 N. 29th St.

Not to mention the palatable startup costs in that section of town.

“It’s affordable to be here as a business,” she said.