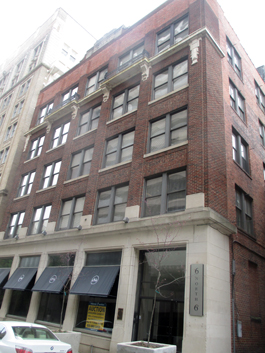 Seven units at at 6 N. 6th St. are hitting the auction block. (Photo by Burl Rolett.)

It’s a downtown auction more than seven years in the making.

A slate of five residential and two commercial condos at 6 N. 6th St. will go up for sale next month as the property’s developers plan to unload their remaining units in the building.

“We’re ready to move out of it,” said Dennis Lynch, one of the developers of the five-story building near the corner of 6th and Main streets.

Lynch and fellow developer George Emerson are selling their remaining units through an auction to be held May 14. It is being managed by auction firm Tranzon.

“We’ve decided that this would be a good time to put it on the market, and I think the auction is going to be well-received,” Lynch said. “There has been quite a bit of interest.”

Emerson and Lynch bought the property in 2007 when it was an office building with only a few tenants. Acting as Six North Sixth LLC, they converted it into units they planned to sell as condos. At the time, though, there was no market for condos and the units were rented as apartments for the next five years.

The developers also had to sit on the building to hold on to the valuable development incentives.

“It was a historic tax credit project so we couldn’t convert them into condos until last year,” Lynch said.

Lynch and Emerson accepted federal historic tax credits on the project, which come with recapture conditions. If the building is sold within the first five years after renovation, the original developer loses 20 percent of the total tax credit amount for each year remaining on the five-year commitment.

Lynch and Emerson also used state historic tax credits to renovate 6 N. 6th, but the state program does not require a developer to maintain ownership of the property to benefit from the incentive.

Of building’s 20 residential condos, 16 were eventually sold in November and December 2012. Those up for auction include three units that are still owned by Six North Sixth LLC, including a one-bedroom, 1,013-square-foot unit and a pair of 1,200-square-foot two-bedroom units.

The other two condos Tranzon has listed are owned by Lynch himself and DLGE Management LLC, according to city records. DLGE shares a mailing address with Six North Sixth LLC. All five of the units are leased to residential tenants, according to Tranzon’s listing.

“I think it’s a great opportunity for either someone who is looking to bring retail or their office downtown or for a developer that wants to finish out some condos and make some profit on that,” she said.

There is no published starting bid for the sales. Terry did not say what she anticipated the units to sell for but said prices will probably be below the last asking prices for the residential condos, which were from $185,000 to $230,000.

“The condo market is heating up again, and these can be had for a very affordable price,” she said.

At least two new condo towers are the works in the city. A team of local developers is set to break ground on a 10-story condominium building at 800 Semmes Ave. later this month.

And developer David White is making his case for a 13-story condo building planned for Shockoe Bottom.

Rick Jarvis, a broker with One South Realty, said that an auction is an attractive way to sell the remaining units because it will lure cash buyers and suitors who already have a loan in place. That’s important, he said, because financing can derail deals in condo purchases if a significant number of the surrounding condos are leased out as rental properties.

“One of the big, big issues is if there is more than a certain percentage of rental units in a certain building (lenders) will not issue a loan,” he said.