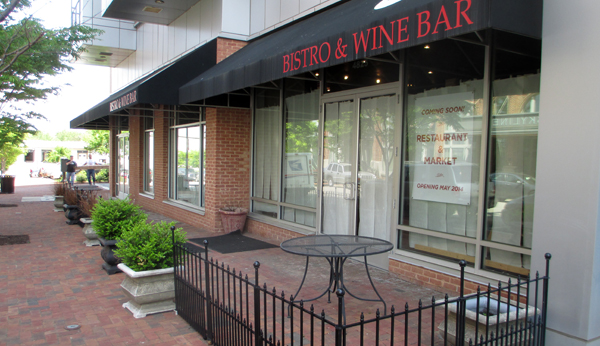 M Bistro was open for around 3 years before it closed in February. (Photo by Michael Thompson.)

A group of local investors is reviving the recently shuttered M Bistro space at Rocketts Landing.

The group, operating as JTB Rocketts LLC, is planning to open Mbargo, an eatery and market at 4821 Old Main St. on May 10.

Steve Goodwin of restaurant investment group HDC Ventures said he and Amy Roman, wife of local restaurateur Mo Roman, are among the owners of Mbargo. Roman owns Pie, a restaurant in the Fan.

The LLC last month signed a five-year lease for the space that until February was home to Michael Hall’s M Bistro for three years. It was one of the first restaurants to open at Rocketts Landing.

Goodwin said Mbargo will serve various cuts of meat, pastas, salads and sandwiches. Entrée prices will range from $9 to $22. Mbargo will also have a market/convenience store next door to its dining area. The store will serve breakfast, lunch, beer and wine, and have a small seating area.

“The residents (at Rocketts Landing) have a long way to go to get a coffee and a reasonably priced lunch,” Goodwin said. “We’re trying to make it more accessible.”

Goodwin would not say how much the ownership group is spending to move into the riverfront community.

The group looked for several years for a good spot to open an eatery and market before deciding on Rocketts, Goodwin said.

“The opportunity was made available to us, and we thought it would be a great fit,” he said.

Goodwin said he hopes to attract residents, workers at companies with offices nearby and visiting boaters.
The new venture will soon have some new residents from which to draw business. Eighty-two new townhouses with starting prices in the upper $270,000s are being built in the development.