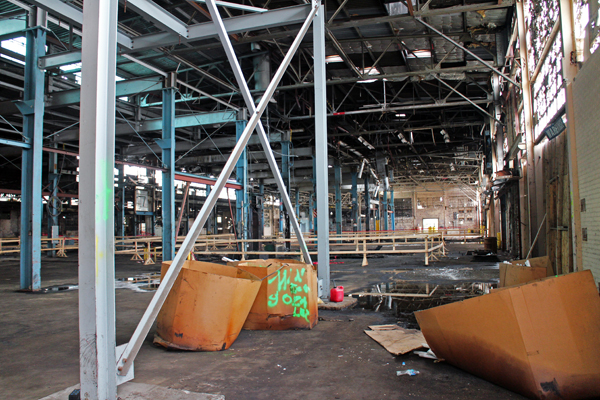 The Reynolds South warehouse property has been almost completely gutted to make room for apartments, but the developer may use the space for Stone Brewing Co. Photos by Evelyn Rupert.

A Richmond development firm is jumping into the fray to lure a massive brewing operation to the riverfront.

Thalhimer Realty Partners is requesting a special use permit to allow a 130,000-square-foot brewery on its Reynolds South tract in Manchester. The application was submitted Aug. 6, as California-based Stone Brewing Co. nears a decision on where to put to its planned East Coast operations.

Thalhimer is requesting the special use permit to allow a brewery at a 6.3-acre tract bounded by Porter, Bainbridge, 4th and 7th streets. The permit would allow the potential brewing facility to expand to as big as 220,000 square feet and brew in excess of 100,000 barrels of beer each year.

Those specs line up with numbers in a Stone Brewing Company RFP for a major brewery, restaurant and retail facility to serve as the company’s base of operations on the East Coast. 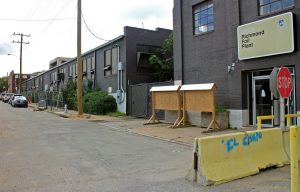 The warehouse buildings run along Bainbridge Street from 4th to 7th streets.

Stone has scouted and trimmed down a list of potential locations this summer and announced last week the search has narrowed to Richmond, Norfolk and Columbus, Ohio.

Stone spokeswoman Sabrina LoPiccolo said the company plans to announce a final decision including both a city and specific location in the next 30 to 60 days.

Stone is the nation’s 10th largest craft brewery and produced 213,000 barrels of beer in 2013, according to the company website.

Stone estimates revenue at its East Coast site will exceed $100 million in its fourth year and eventually reach hundreds of millions annually.

Documents included in Thalhimer’s application file say the proposed brewery will “invest approximately $47 million for machinery, equipment and personal property within the first five years of operation, all of which are taxable to the city.”

Thalhimer’s request is similar to an ordinance introduced by the mayor’s office earlier this month at a specially scheduled Richmond City Council meeting.

At that meeting, held on Aug. 4, an ordinance was introduced to allow a large-scale brewery on 12 acres at Williamsburg Avenue and Nicholson Street. Most of that land is owned by the Richmond Redevelopment and Housing Authority.

Richmond’s planning commission is scheduled to review the Williamsburg Avenue request at its Sept. 2 meeting. The City Council would likely take up the matter at its meeting the following week.

A timeline to review the Reynolds South permit was not readily available, though an email from planning staff included in the application file suggested an ordinance could be introduced “at the first September meeting, if not sooner.”

LoPiccolo declined to say if Stone had a preference for either site over the other. 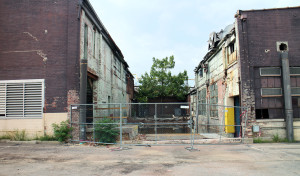 Thalhimer’s permit is asking for 130,000 square feet of brewery space on the Reynolds South property.

“(Sites) had to meet pretty detailed requirements,” she said, referring the RFP the Stone put out in January. “We wouldn’t have even considered Richmond if we didn’t feel like the sites that we were looking at were meeting our requirements.”

Thalhimer Realty Partners, the development arm of local commercial real estate firm Cushman & Wakefield | Thalhimer, bought the 17-acre Reynolds South site last December. The company plans for the property include a row of historic tax credit apartment rehabs along Bainbridge Street, two high-rise buildings on a tract stretching from the north side of Porter Street to just past McDonough Street and a retail development at Hull and 4th streets.

A trio of vacant warehouse buildings covers virtually the entire 6-acre property that is subject to Thalhimer’s special use application. Putting a brewery at the site would require either repurposing those warehouses, likely using historic tax credits, or demolishing the structures and building new. Stone’s RFP said the company would be open to moving into an existing structure or building on undeveloped land.

Thalhimer Realty Partners has begun the process of converting those three buildings into 263 apartments, as originally planned, and the firm’s Vice President Matt Raggi said demolition is more or less complete on all three of the warehouses.

He declined to comment on the potential for a brewery beyond what was included in the special use permit application.

“While the SUP, if approved would afford us the flexibility to put a brewery on the site if a good opportunity arose, for now we have no firm plans for one,” Raggi said in an email.

This is a much better location for the brewery as well as a wonderful anchor for Manchester. The vibe from a couple of hundred workers on that site and lunch day crowds will stimulate the entire area. It will even bring more business to Legends. And, it will be the start of a rebirth of the Manchester Hull Street corridor bringing much needed traffic and businesses for the 1200-1600 blocks. The City should throw its weight behind this proposal of Thalhimers.

@Bruce Milam – Just curious what makes the manchester site “much better”? And seriously I am just curious I just want the City to get the brewery first and foremost.

On the other location I see close proximitiy to Rocketts (boathouse, marina, festivals, active residents, conch) ans well as Church Hill and Shockoe, Libbie Hill Park (more festivals)…along with being right off the Capital Trail, making it very walkable/bikable from downtown, browns island, schockoe slip… add to that its near the riverfront without a floodwall?

Great idea! Whatever it takes to get them here.

Its much better because its the “punch” that Manchester needs as a focal point of that district of the City. The live/work/play/walking community is mostly many, many apartments and old run-down industrial uses, and a dilapidated business district. This would accelerate the revitalization of that entire community without consuming any riverfront. Its just my opinion but I’m never shy about offering it.

@Bruce Milam Just my opinion, but I don’t think the reasons you gave are really enticing reasons for Stone to choose Manchester from a business standpoint. @Mike Baker – I agree with your reasoning, not to mention the several parks within close proximity. I do agree that if Stone were to choose Manchester that it would certainly benefit the area immensely, but I feel that the Rockett’s Landing area would be favored for more reasons.

@Bruce Baker – sorry I understand now – its much better for Manchester…got it.

I really hope we get it no matter which location.