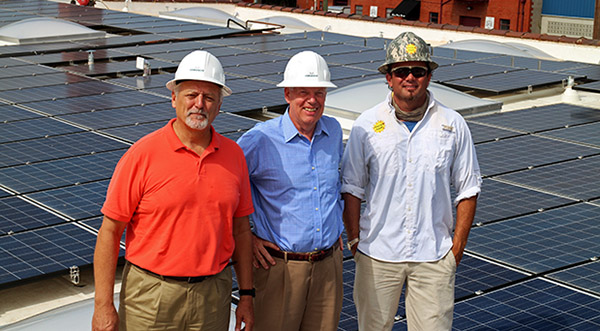 Scott’s Edge, one of the latest developments rising in Scott’s Addition, takes the form of most Richmond apartment rehab projects.

It has the usual granite countertops, stainless steel appliances and 100 or so apartments built into an old warehouse.

The project is full of names familiar to the Richmond development scene. Walter Parks Architects handled the design, and Monument Construction is the general contractor. It’s the 21st residential and mixed-use development for co-owner Jerry Peters.

“We’re going after the same market our competitors are after, with a product that’s different but the same,” Peters said.

What makes Scott’s Edge different isn’t visible from the street – the state’s Department of Historic Resources was very particular about that, Peters said. But the hundreds of thousands of dollar’s worth of solar panels lining the roof could give the near-century-old building an edge in the apartment market.

The $11 million, 94-unit apartment project at 3408 Moore St. is the first major apartment complex in the city that will use the sun to generate the bulk of its electricity. Its owners say their solar array is the largest in Richmond and the fourth-largest in the state.

The developers will use the solar panels, along with a set of other energy-efficient utility systems, to potentially cut the complex’s power bill by more than half. 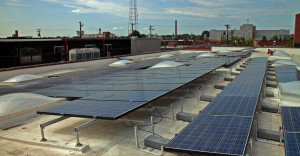 About 950 solar panels cover a third of the complex’s roof.

Peters and development partner Jim Edge are aiming for an average of about $225 in yearly power costs for each unit, or about $19 per month per apartment.

Peters said he had previously looked into the idea for condos as well as apartments, but he feared the market wasn’t there, and he didn’t have partners comfortable with gambling on solar. And condo buyers and renters were unlikely to pay more up front for the promise of lower utility bills.

So Scott’s Edge will be managed with a one-check system, where renters pay a single monthly fee that includes rent, power, water, cable, internet and other fees.

The one-check system makes the solar development work for Peters and Edge because it means they will also benefit from lower utility bills.

“The cost savings come to us, which means we’re allowed to spend more,” Peters said. “Unless the landlord is paying the bill, you can’t afford to put this in.”

Rents for the one- and two-bedroom apartments will run from $900 to about $1,300. Those figures are comparable to the rates Main Street Realty reported last month for its project at Norfolk Street and Summit Avenue on the other end of Scott’s Addition. Main Street also uses an all-inclusive, one-check rental process.

Peters is guessing it will take about six years for the building’s energy costs to total the amount of extra money he and Edge put into making it more efficient. But Peters added that the lower utility costs will increase the value of the building from day one by boosting its monthly net operating income.

The pair is spending around $1 million for the 952 solar panels that cover about a third the complex’s roof as well as technologies aimed at shared energy use for heating, cooling and hot water throughout the building. 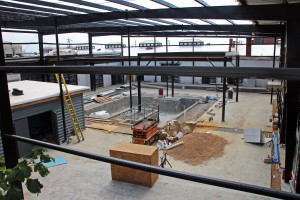 Scott’s Edge hopes to move in the first tenants next month.

The solar panels are the most expensive piece of that plan and will cost about $780,000 more than plugging into the power grid normally.

Most of the solar power they’ll create will shave kilowatt-hours off of Scott’s Edge’s power meter – essentially running the number backwards when the building is creating more energy than its using. That should then leave a reduced balance that the building’s owners will pay off like a normal power bill.

The energy they’ll create will go into the grid, and any unused energy will be sold to Dominion Power.

Currently, Peters and Edge are ahead of the power company. The solar panels they’ve installed so far have for the last three weeks been pumping more power into the grid than the unoccupied apartment building is using.

Locally based Shockoe Solar is installing the panels. The firm has done similar but smaller jobs at the Manchester Motorworks building on the Southside and the Bliley’s Garage apartments in Jackson Ward. But Shockoe Solar head Bernie Stanley said Scott’s Edge will be the largest solar farm in Richmond.

Scott’s Edge’s solar panels have a 238 kilowatt capacity, three times as much as a Shockoe Solar’s biggest project to date: an 83 kilowatt farm at Yorktown Naval Weapons Station.

“That was a huge job for us at the time,” Stanley said.

At Scott’s Edge, it’s estimated the solar panels will create enough energy to cover about half of the apartment complex’s needs, though those numbers are preliminary estimates.

The second energy saver Peters and Edge tout is a quartet of rooftop HVAC systems that replace the status quo of one heating and cooling unit per apartment.

Peters said the Scott’s Edge’s four large HVAC systems can run along more steadily and at less than full strength to cover each renter’s needs using less energy. The system can even transfer heat from a warmer apartment to a colder apartment. 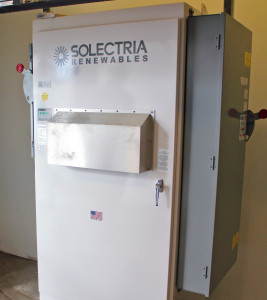 Another piece of the project’s solar energy system.

Peters estimated the heating and cooling units would trim HVAC-related energy costs by 40 percent. He said HVAC makes up about half of all energy a building uses.

Scott’s Edge also has an on-demand hot water system that has a similar load-sharing process. Instead of a water heater for each apartment, the building has 10 tankless water heating units that cover the entire building.

At least one of those units is cranking at all times, but the others stay quiet until the complex needs more hot water.

“We intuitively know that instead of heating 94 buckets of water, 24 hours a day, having it on demand is less expensive, we just don’t know how much yet,” Peters said.

Peters and Edge met about two years ago to develop Scott’s Edge. Peters had the expertise, and Edge had the real estate.

Edge is a CPA whose family has owned the Moore Street property since the 1920s. It housed the family’s Morgan Brothers Bag Co. until the firm folded nearly a decade ago amidst stiff international competition.

“The Chinese helped me get out of the bag business, but we kept the real estate separate from the business,” Edge said.

Edge tried to lease the building for several years but found little success filling the Class-C office space and a warehouse he said was well-outdated. In the midst of Midtown’s apartment boom, Edge made what a he called a “3 a.m. decision” to convert the building into apartments.

The two formed Moore Street Apartments LLC and bought the building for $2.6 million in 2013, according to Richmond city records. Construction began in earnest last December.

The project’s first phase will bring on about 32 of the 94 planned apartments in October with the rest to follow by the end of the year.

Scott’s Edge won’t have to look far to find competition in and around Scott’s Addition.

The Interbake Cookie Factory on the other side of Boulevard is leasing, and within the neighborhood more than 500 units are in the works.

Peters said the duo did feel some pressure to get their building underway to try to get to market as soon as possible.

“We knew they were coming,” he said. “So we wanted to get rockin’ and rollin’ as soon as we could.”

Peters said that he would like to incorporate solar into other developments moving forward, but it will have to be done on a case-by-case basis in projects where the numbers make sense.

Edge said they will wait to evaluate the Scott’s Edge development before deciding whether or not to take on another solar project.

“I told Jerry (Peters) ‘Let’s get this one up and running, then we’ll sit down and see what else there is to do,’” he said.

Excellent news about Scott’s Edge! I appreciate forward-thinking developers who understand where the market is going and are willing to be early-adopters. We need more developers to start building new individual homes with solar installations, like Jay Epstein’s The Villas at Rocketts Landing. Given a real choice, homeowners are going to recognize and choose the benefits and long-term savings of alternative energy. I understand the practical importance of Scott’s Edge using the “one-check system” that folds all utilities into one rent price, if it brings along partners not comfortable with the solar “gamble”. But in the long run we all… Read more »