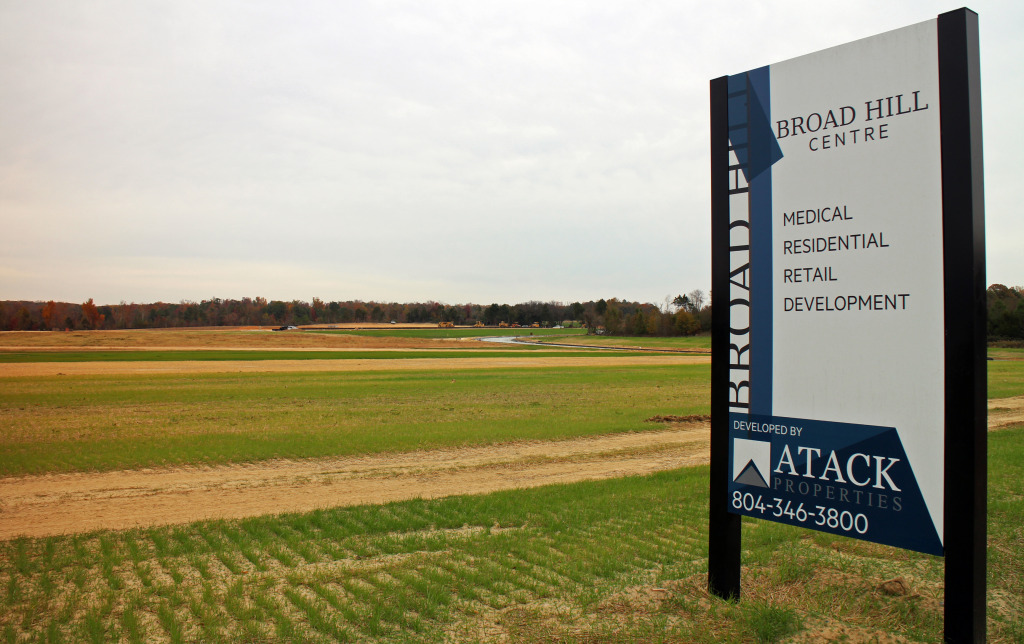 Construction has started on a 320-unit apartment project near Short Pump. Photo by Michael Schwartz.

Work is underway at Avia, a 320-unit apartment project headed up by Steven Middleton’s Commonwealth Properties that will be part of one of several large developments beginning to shape near the Henrico-Goochland county line.

Middleton’s project will kick off the surrounding 70-acre mixed-use project master planned by Atack Properties. The entire development will go by the name Broad Hill Centre and will be anchored by a 170,000-square-foot Bon Secours medical park just south of Middleton’s apartments.

Broad Hill Centre will also include a 13-building condominium development and 76 townhomes that will likely run from $300,000 to about $350,000.

Plans for Middleton’s project call for 15 buildings with one-, two- and three-bedroom apartments that he said he hopes will appeal to a wide range of renters.

Middleton will build on about 20 acres he bought from Atack Properties in September for $7.75 million. Atack bought the entire Broad Hill Centre property running from Broad Street to Interstate 64 in 2011 for $6.75 million. Plans for Avia also call for two pools, a rooftop lounge, playground, dog park, jogging trail and fitness center. 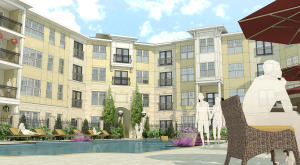 A rendering of the Avia pool and courtyard. Courtesy of Steve Middleton.

Middleton is funding the project with private investment money, he said. The entire complex is expected to take about 18 months to complete, but Middleton is aiming to move in Avia’s first tenants in about a year.

Cory Atack of Atack Properties said Bon Secours is buying its Broad Hill Centre land in a deal he expects to close this month.

The townhome sites have drawn some interest from national builders, he said, but Atack Properties will wait until the land for the townhomes is developed to close any deals. He expects to begin marketing the sites early next year.

Atack said his firm has met with national grocery chain, gas and convenience stores and hotel representatives interested in a trio of outparcels at Broad Hill Centre.

Broad Hill Centre is one of four massive development projects underway between Gayton Road and the Goochland County line.

One the southern side of Broad Street, Markel | Eagle Partners plans to build 300 townhomes and detached residences and up to 224,000 square feet of commercial space at its GreenGate development. Just west of GreenGate, 254 apartments and a Medarva-anchored medical office building are under construction at the Notch at West Creek.

With nearly 1,000 apartments in the works between the Retreat at West Creek, Breeden Co.’s Marshall Springs community on Gayton Road and Avia, Middleton hopes easy access to West Broad Marketplace will give his project an edge.

Short Pump will be Tysons Corner 3 in five years……so sad! I have been living in Short Pump for almost 24 years. Time to leave.

Tysons Corner has more retail within a 3 miles radius of Routes 7 and 123 than almost any other spot in the world. Its another animal altogether. Short Pump will be the retail focus for central Virginia for years to come, generating tax revenue and jobs for the region. The higher densities of residential are essential to shorten commutes and integrate the live, work, play aspect of neo-urbanism. Middleton has done an outstanding job in every location he’s built in the Richmond area and this will be no exception.