A trio of Southside restaurateurs is opening a new venture in VCU country.

They’ll take over the space at the corner of North Laurel and West Broad streets that was most recently home to Empire Dining and Lounge, which had a nearly 10-year run before closing in October.

The new tenants have a three-year lease on the space and hope their success with Flyin’ Pig, which they opened in 2012 in the Waterford Shopping Center, will carry over to their new concept.

“We’re taking what worked (at the Flyin’ Pig) and making it work in this part of the city,” Anderson said.

The emphasis at Asado will be on smoked wings and tacos. Breakfast will also be available. 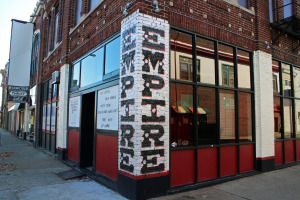 Rogge said he and his partners bought the Empire’s restaurant equipment and are ready to spend $50,000 to $100,000 to get Asado open. They are financing it themselves.

He said the new venture’s prime location outweighed any concern over Empire’s closing and nearby parking.

“The amount of foot traffic is something we are really excited about,” Anderson said.

The Southsiders are settling into an area packed with eateries clamoring for student diners. A new pizza concept is planned to open just across the street from Asado, and a burger joint opened next door in November.

In addition to a name and menu change, the restaurant property will undergo some cosmetic changes. The owners will move the building’s main entryway from Laurel Street to West Broad. Bamboo and wood finishes are in the works for the space. The upstairs part of the property will remain closed until demand for Asado warrants an expansion, Anderson said.

Rogge said Asado will emphasize quick service with high-quality fare. In addition to tacos and wings, the Asado menu will include burgers, salads and vegetarian options. Virginia beers are planned to be on tap.