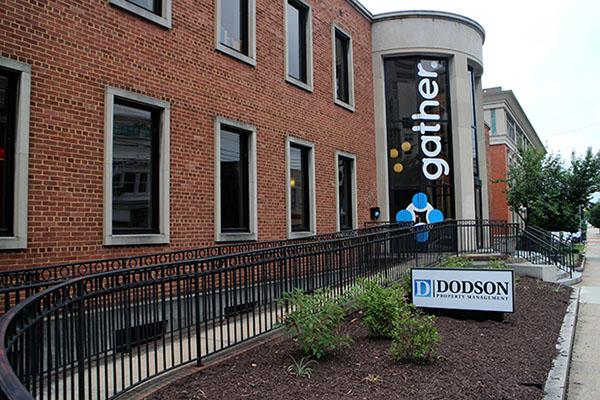 Downtown Gather members will soon have access to a second facility. Photo by Evelyn Rupert.

A Richmond co-working brand is gathering steam in one of the city’s hottest neighborhoods.

Gather, which last year opened a co-working space downtown on East Main Street, is expanding with a new location in Scott’s Addition.

Co-owner Andy Beach said the company last month spent $1.15 million to purchase the property at 2920 W. Broad St., where it plans 16,000 square feet of co-working space and 10,000 square feet to be leased to an undetermined tenant.

“I think it speaks to everything that’s going on in Scott’s Addition – all of the residential, as well as retail and commercial,” Beach said. “We know there’s a lot of demand there.”

Gather is owned by Beach and Jeff Bunch, both of Urban Core Development, Duke Dodson of Dodson Property Management, and Doug and Polly White of Whitestone Partners. 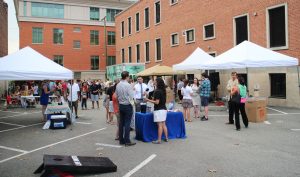 Gather celebrated its first birthday at an event Friday. Photo by Michael Thompson.

The Scott’s Addition Gather will have more than 60 offices to be leased out – triple the amount its 12,000-square-foot downtown location has at 409 E. Main St. Gather memberships include access to conference rooms, a gym, Black Hand Coffee, a kegerator, Wi-Fi and ping pong. Gather is also used as an event space both privately and for networking purposes. Gather members will have access to both locations.

Beach said development costs on the new building are expected to be between $1.2 million and $1.5 million. First Capital Bank is financing the project, which will also seek historic tax credits.

Demolition on the space, currently a Stuffy’s Subs, will begin in June, and construction is expected to finish in December. Architects Dayton Thompson & Associates is designing the building, Campfire & Co. is doing the interior design and Urban Core Construction is the general contractor.

“The current location has exceeded our expectations,” Crenshaw said. “This allows us to extend our reach and provide access to a different geographic area.”

The downtown location opened in April 2014. It has about 90 members who pay monthly fees of $250 for access to a work space or $350 for semi-private desks.

Co-working spaces have become an increasingly popular way for freelancers and small businesses to gain a footing in their industries without the expense of leasing an entire office.

Other local ventures trying to capitalize on the trend include Eastern Land Collective and 804RVA. A similar concept is in the works near the 17th Street Farmers Market.

“It’s exciting to see these companies come in and take advantage of the facilities, but the real value is the people they meet and other people they interact with,” Crenshaw said. “If you’re going to Starbucks, you might talk to the barista, but you’re not around people running a business.”

Crenshaw said the spurt of development in Scott’s Addition made it an attractive location.

“If you look at BizSense every day there’s a new (apartment) development in Scott’s Addition – those people are going to need a place to work,” Crenshaw said.

“We want to expand within Richmond, greater Richmond and eventually outside the area,” he said.