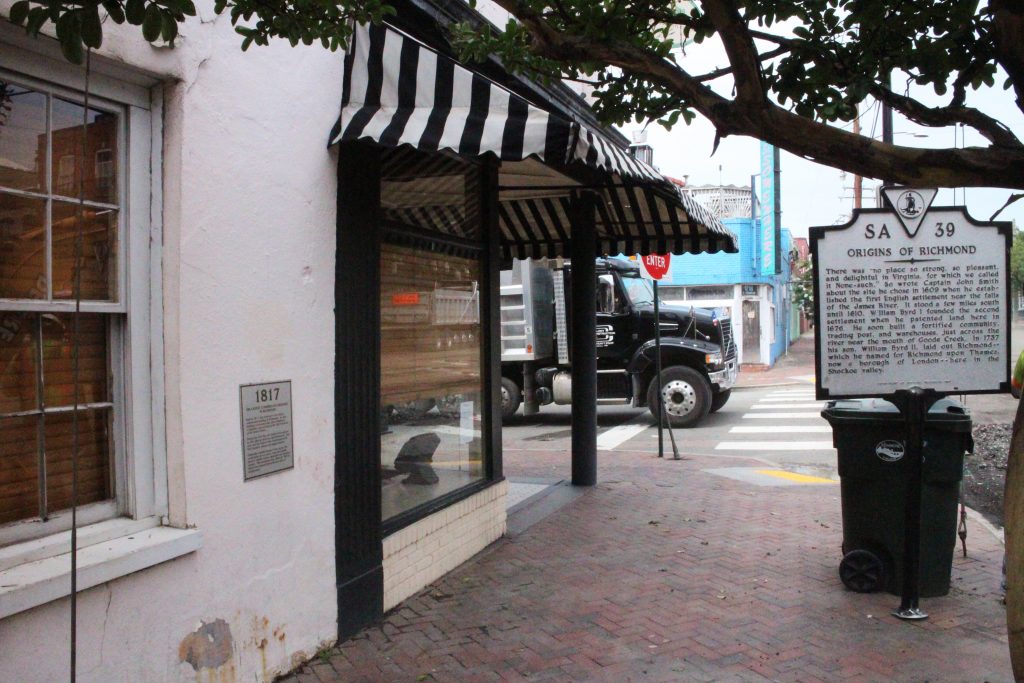 A plaque on the former Julep’s site marks it as the oldest commercial building in Richmond. Photos by Michael Thompson.

A quartet of first-time restaurateurs has plans to reopen one of Shockoe Bottom’s oldest dining spaces.

Shockoe Whiskey and Wine will look to launch next month in the former Julep’s space at 1719 E. Franklin St.

“We definitely have some big shoes to fill,” Minter said. “It’s an honor to be able to get the same space and carry on the tradition.”

The property, built in 1817, sits at East Franklin and North 18th streets. It is owned by Second Sports Realty Association LLC, according to city records. Broker Will McGoogan of Cushman & Wakefield | Thalhimer represented the landlord in the leasing of the space.

Shockoe Whiskey and Wine’s menu will include lamb chops, crab cakes, wings, steak and snapper. Minter said they’ll also have high-end Irish and American whiskeys. He said the space will be family-friendly but also attractive to young professionals looking to unwind.

“It will definitely be a businessman’s atmosphere,” Minter said. “It won’t be a nightclub or lounge type of feel.”

Minter would not say how much it will cost to open Shockoe Whiskey and Wine. He did say he and his team are financing it themselves. They each come from different backgrounds but have owned other ventures or worked in fields like marketing, event organizing and human resources.

Shockoe Whiskey and Wine isn’t the only venture in the works for Shockoe Bottom. The former Aziza’s on Main space at 2110 E. Main St. is being filled by Pizza Tonight. And a new bakery is in the works nearby.

Minter said the rise in apartments in the neighborhood persuaded him that a Shockoe Bottom restaurant could pay off.

“The majority of the demographic is young professionals,” he said. “You have a lot of people moving into the downtown area. We see the opportunity as ripe for the picking.”