A new apartment project at Libbie Mill-Midtown will be built around an open courtyard. Rendering courtesy of Gumenick Properties.

An 80-acre mixed-use development off Staples Mill Road is revving up for its first residential section and got an initial green light for a plan to take the skyline in that part of Henrico County to new heights.

Gumenick Properties is preparing to begin construction on a new five-story retail and apartment building at its Libbie Mill-Midtown development and also recently secured approval from the county to build a massive tower in the center of the project.

The five-story building will include 40,000 square feet of retail on the ground floor, with 327 one-, two- and three-bedroom apartments on the top four floors.

The apartment building marks Libbie Mill’s first stab at residential use. The development began with the opening of a Southern Season grocery store, and work is underway on office space that already has a large tenant signed on. A large new county library is set to open there in October, as well.

With the other aspects of Libbie Mill coming together, Gumenick spokesman Ed Crews said the time is now right to bring residential units into the mix.

“We have office, we have retail, we have the library coming online – now it’s time to have some residents in the apartments,” Crews said. “From the very beginning we’ve said that the community is going to be not only a retail destination, but also a community where people can make a home. When we have the apartments open, you’ll begin to get a sense of community.”

Amenities planned for the apartment building’s residents will include a 38,000-square-foot outdoor area at the building’s core, which will sit above covered parking, and calls for a pool, fountains, outdoor grills and other entertainment spaces.

Each apartment unit is also set to include a private balcony or terrace. 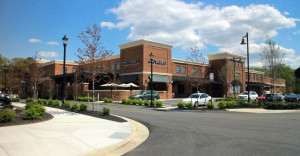 The development is anchored by a Southern Seasons grocery store. Photo by Katie Demeria.

Construction is likely to start by the end of this year or early next year. Crews did not share the construction timeline, as he said it may be subject to change. He would not provide the cost of development for this latest addition.

Whiting-Turner Contracting Co. is the general contractor, and Commonwealth Architects will design the project.

Crews said tenants have not yet been lined up to take over the building’s retail space, which has also been approved for potential restaurant use, and he said it is too early to say how many possible retailers may settle in there.

As Libbie Mill prepares to bring in residents, it has also been given permission to grow much taller. Henrico County last week approved Gumenick’s request for a planned 250-foot building in the center of Libbie Mill, which will tower above the other structures.

The developer had to get special permission for such heights, as newly constructed buildings at the development are otherwise restricted to 100 feet or less.

The 250-foot building will be joined by two 175-foot buildings, for which the developer previously gained approval.

Crews said the use for those three buildings has not yet been finalized, but possibilities include retail, office, parking or condominiums, or even a hotel.

“There’s some flexibility yet, and a lot of what’s going on around the 250-foot building will depend on what the market tells us when we get there,” Crews said. “One of the things we’ve been careful about is that we’re not ahead of the market, and that applies to this structure, as well.”

He said it is not yet clear how many stories the buildings will be, and a timeline for construction has not been set up yet.

“The more buildings we add, the more people we bring in, the more it becomes a real, live, breathing community,” Crews said.

Once completed, Libbie Mill-Midtown will include 160,000 square feet of retail space, 994 for-sale homes and 1,096 apartments. It will likely take 10 years to complete. In April, it was named the Project of the Year by the Greater Richmond Association for Commercial Real Estate.

The one thing that is assured by Gumenick is a quality product. They improve every corner on which they build. And they manage their rental property well. I’ve seen apartments of theirs that look excellent thirty years after initial construction. Plus, they have the deep pockets to carry them through unfavorable economic conditions.