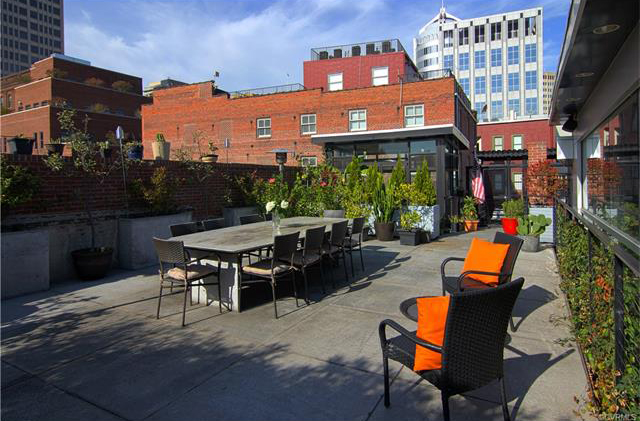 The condo has a rooftop deck and greenhouse. Photos courtesy of CVRMLS.

A Shockoe Slip penthouse custom-made for a Richmond developer is up for sale for the first time.

Featuring a modern architectural style and impressive city views, the 6,000-square-foot space was designed by Walter Parks Architects, which, according to the firm’s website, took inspiration from Tom Papa’s interest in the city’s rustic character and his collection of modern art.

Tom Papa is co-founder and managing partner of Fountainhead Properties, which has developed such projects as the Miller Lofts in Manchester and is currently planning two apartment towers just west of the Mayo Bridge. Angel Papa, an associate broker with Engel & Volkers Richmond, said her husband would often walk to work in Manchester directly from the home, emphasizing its accessibility that she said may appeal to downtown executives and others seeking an urban, walkable lifestyle.

“I feel like the location is far superior to, say, the condominiums at Rocketts Landing or even the Vistas (on the James), just because you walk out your front door, you’ve got myriad of cafes, entertainment destinations, but you also have the financial district right there, The Martin Agency, several major law firms,” she said. “You literally could just park your car and walk to work every day.”

She said she has sent marketing materials to each of those firms in the neighborhood in hopes of spurring interest in the property, which she and her husband left in May in favor of a mid-century modern home they are renovating near Carytown.

Located above Dransfield Jewelers and the Antique Boutique and Delectable Collectibles store, the 10-room penthouse was listed late last month but had a delayed showing that started Oct. 2. City property records list the owner as Siamo Declarant LLC, of which Tom Papa is the registered agent.

Tom Papa said he bought the two 19th century buildings that make up the property about 20 years ago with Don Dransfield, whose jewelry store remained a tenant after Papa bought Dransfield out about eight years ago.

With Walter Parks Architects, he converted the upstairs space into three residential units in 2008 and 2009 – his 6,000-square-foot space, and two smaller units, each about 1,000 square feet.

“It gave me a chance to work with my favorite architects on a project that was a little bit more of a stretch,” he said. “This was just a bit of a blank slate.”

Spanning three levels across the two adjoining buildings, the three-bedroom, 4½-bath condo features a rooftop terrace and greenhouse; two full-service kitchens, one of which is on the terrace; a glass- and steel-walled Florida room; a 250-bottle wine closet; and four gas fireplaces. Described as a “Manhattan-style smart home,” the condo includes a video intercom and a computer system for controlling lighting, climate control, surround sound and a security system.

Angel Papa said the property’s open floor plan is excellent for entertaining guests and hosting large gatherings. She said the couple hosted their wedding reception there, as well as parties, charitable functions and an underground kitchen event.

“It definitely has the space and the flow that accommodates a large-scale group of people,” she said.